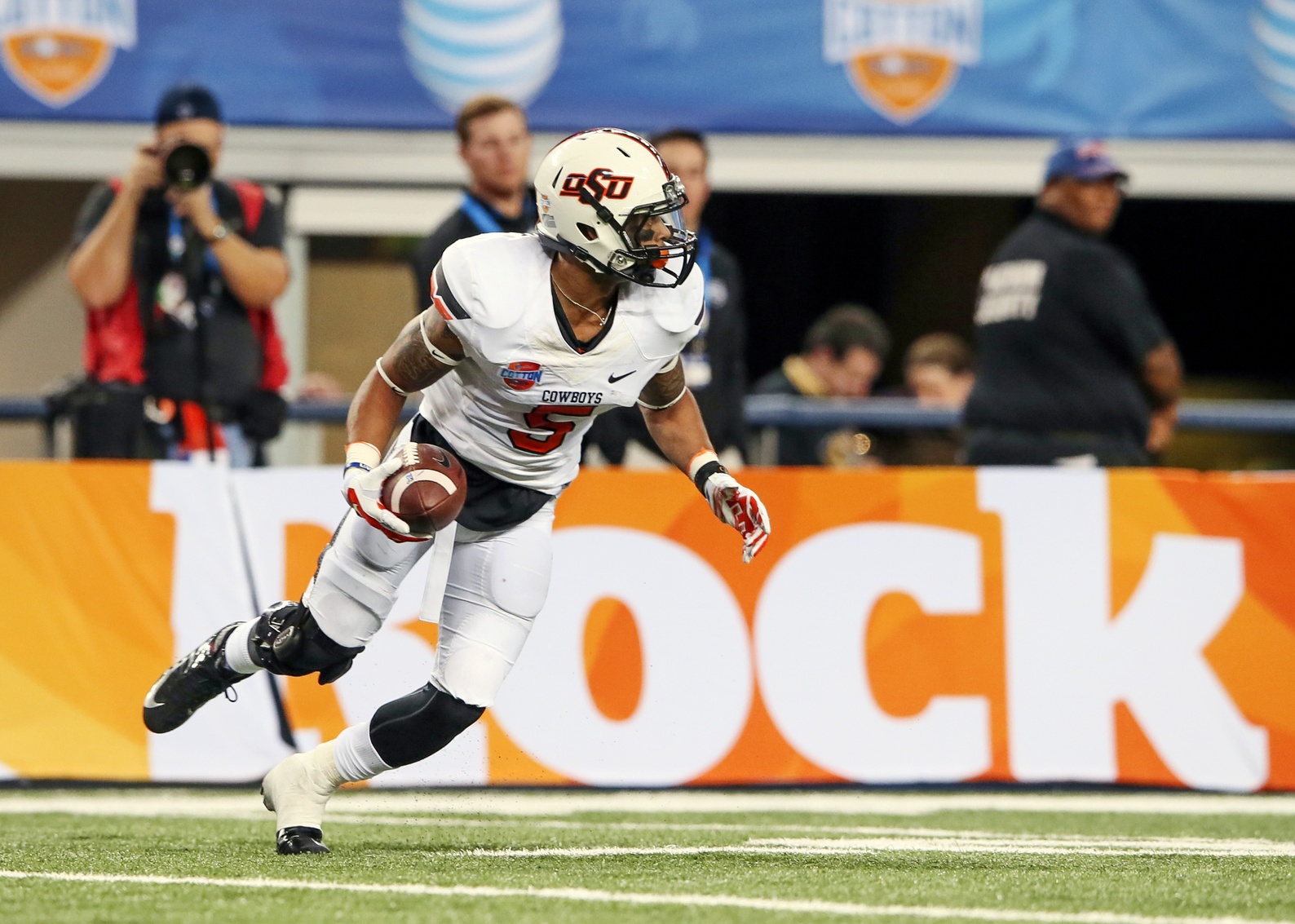 Do you remember the punt return against TCU? The one that’s pretty hard to forget? The one Josh Stewart fielded on his own five-yard-line that went from “what is he doing?” to “what is he doing!” in the time it took to swap the punctuation marks.

That’s the moment that meant Josh Stewart was going to turn pro because it represented his evolution as a football player. It represented the apex of his under-appreciated development as a collegian.

Oh sure, he could have come back in 2014 and put up a 1,000-yard season and scored a bunch of touchdowns and wrapped up another All-Big 12 trophy (or whatever they give out to all-conference performers). But that would have also meant another year of potential concussions, ankle injuries, and hits from linebackers twice his size.

And it would have been a lost year for a guy clearly trying to ply his trade as a professional athlete — unless you think OSU is going to win the Big 12 or a national title.

The irony in all of this is that Stewart’s better year statistically was in 2012. He had 101 catches, 1260 yards, and 8 total TDs. Compare that to this season of 60 catches for 707 yards and 5 total TDs. Strangely, both resulted in an All-Big 12 second team nod. And of course he couldn’t have turned pro after his 2012 season anyway.

A lot of people have scoffed at his decision to hang up his Pete helmet and trade it for one that says “NFL Combine” even after receiving an evaluation that said he would probably be picked between rounds 4-7. But really, what was his ceiling?

He’s done everything he was going to do in college and I think he probably knows it. His growth as a punt returner makes him more valuable to NFL teams but it’s not like he was going to evolve into Dez in 2014.

Which is why it was smart, for the longevity of his career, to turn in now and see what happens.

You can argue that he needs his degree, he is nothing without that piece of paper! To which I would counter that, if he plays his cards right, Josh Stewart can have a lot of jobs in Oklahoma or Texas because he is Josh Stewart, with or without a degree.[1. I tend to think college degrees are quite overrated anyway but that might be because I have two of them and I post photos of bald-headed men with bad tans for a living.]

Stewart leaves as the sixth-most prolific receiver in school history. Only Dez, D’Juan, Rashaun, Hart Lee, and 81 have more career yards than Stewart’s 2,208.

For context, in the draft at the next level I think he’s a middle class man’s Tavon Austin — Stewart is certainly slower but I think he might be a better technical receiver. On the field I think he could be absolutely fantastic on a good team (Seattle?) — maybe like a poor-to-middle class man’s Jordy Nelson.

I’m bummed that he’s leaving, of course, but his is a story that we all want to root for. I tend to fall on the “don’t stay too long” side of things for college athletes, especially in football, especially wide receivers and running backs, and it would be a brutal thing if he came back, got hurt again, and got tagged with the “injury-prone” label.

No, the upside to him leaving right now far outweighs the upside of him coming back for another season — especially with the bevy of wide receivers OSU will have back. Ateman, Seales, Glidden, Sheperd, Tracy Moo….wait, stop it, you’re telling me Tracy Moore won’t be back next year? I thought he signed a lifetime contract!

As Stewart told Brendon Morris, the decision was pretty simple for him. He has a family to try and take care of.

“At the end of the day, it comes down to my decision and what I feel is best for my family. When you have a decision, you have to go the way that makes the most sense, and go at it with 100%.”

So whether or not Stewart makes an NFL team next season, this is the right call — for him, for his family, for everyone.

He gave Stillwater so much in what seems like so little time (didn’t he get here around Jeremy Smith’s first senior year?)

My lasting memory of him will always be the kiss he blew right after the TCU return: