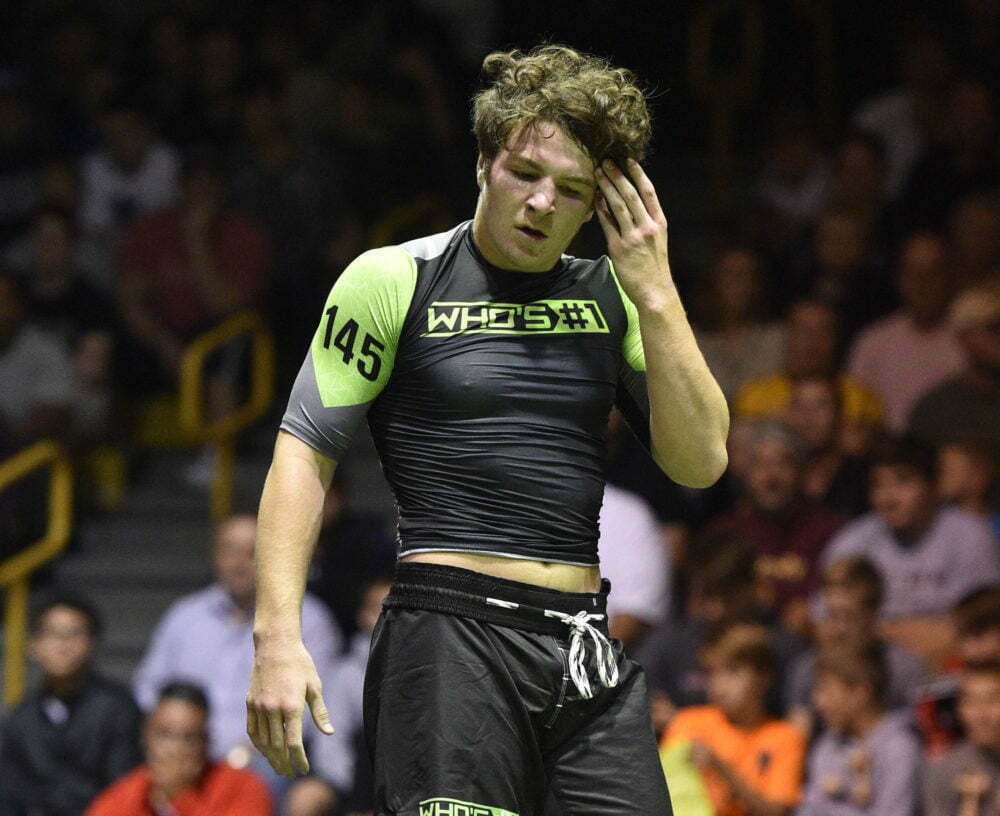 Some of the wind was let out of the sails in regards to the excitement surrounding the Southern Scuffle when we found out that Joe Smith and Daton Fix would be missing the tournament due to injury and illness Monday. John Smith said recently that Joe has still been dealing with the same infection issues he’s had for a while and it kept him out of Reno. My assumption is that is still the issue and what kept him out here. It could’ve been the same sickness Fix had as well though. Fix simply got sick and was unable to complete because of that.

Gary Wayne Harding and Kaden Gfeller stepped up to make the tournament a bit more interesting for Cowboy fans though as both rolled through the tournament and into the finals knocking off a few ranked and higher seeded guys in the process.

At 141: Kaden Gfeller had an interesting path to the final. The true freshman won his first match with a tech, then pinned the next guy. The next match looked like it would be his first real test of the tournament against PSU’s Jered Cortez, but Cortez was hurt in the last few seconds of his match and couldn’t go.

Gfeller defaulted into the semi where he took on the 2-seed from Lehigh, Luke Karam. In the first, there was some confusion after Karam took injury time which should’ve given Gfeller the position choice. The refs missed that and what looked like a TD for Karam ended up being called off. Weird exchange but it went to the second with no score because of that. Karam got a quick escape and Gfeller picked neutral in the third. Gfeller got the TD and rideout late to win.

The final for Gfeller was an incredible match and probably one of the more intriguing ones as it had two of the top freshman in the weight class with Gfeller and Nick Lee from PSU. Tons of scoring. Gfeller gets a TD in about the first five seconds, then they exchange scores til the end of the first. Gfeller gets a reversal in the second and puts Lee on his back. After a few minutes of working for it he picks up the fall.

The last true freshman to win the Southern Scuffle was Mark Hall from Penn State. He won a NCAA title 3 months later.

At 133, Gary Wayne Harding came in unseeded and knocked off the 4-seed PSU’s Corey Keener in his first match then rolled through 5-seed Ricardo Montoya, and unattached 8th-seed Cory Smith. He lost in the final to Jack Mueller of Virginia.

Really good tournament for him and it may help with seeding for Kaid Brock at the NCAA tournament. There are 4-5 guys jockeying for the 2 seed at the NCAA’s at this weight and a few of them were in this tournament. Looks good when your backup finishes ahead of them.

Those two were the bright spots. Andrew Marsden in his debut at 184 went 2-and-out, Tristan Moran at 149 had a few solid wins including one over pretty highly-ranked Ronnie Perry from Lockhaven but did not place losing to Dean Heil’s brother Josh, who made a surprise run to the final, then lost in OT to Trevor Elfvin of Drexel. Blake Andrews at HWT had the deepest run on the consolation side of anyone that didn’t place.

Overall, the depth of OSU’s team really stood out. When a true freshman, in his redshirt year, and a backup make the finals of a tough tournament like this it shows overall what is in the room — a lot of depth and talent.

The bad thing is the guy whose points are most likely to count in March didn’t have the performance you want to see. The 184 group was tough here but you didn’t want to see Marsden go 2-and-out. It’s not something to get too hung up on. It’s his first time making the weight and it’s not like he just completely laid an egg, he was in both matches. Hopefully we’ll see some improvement there going forward.