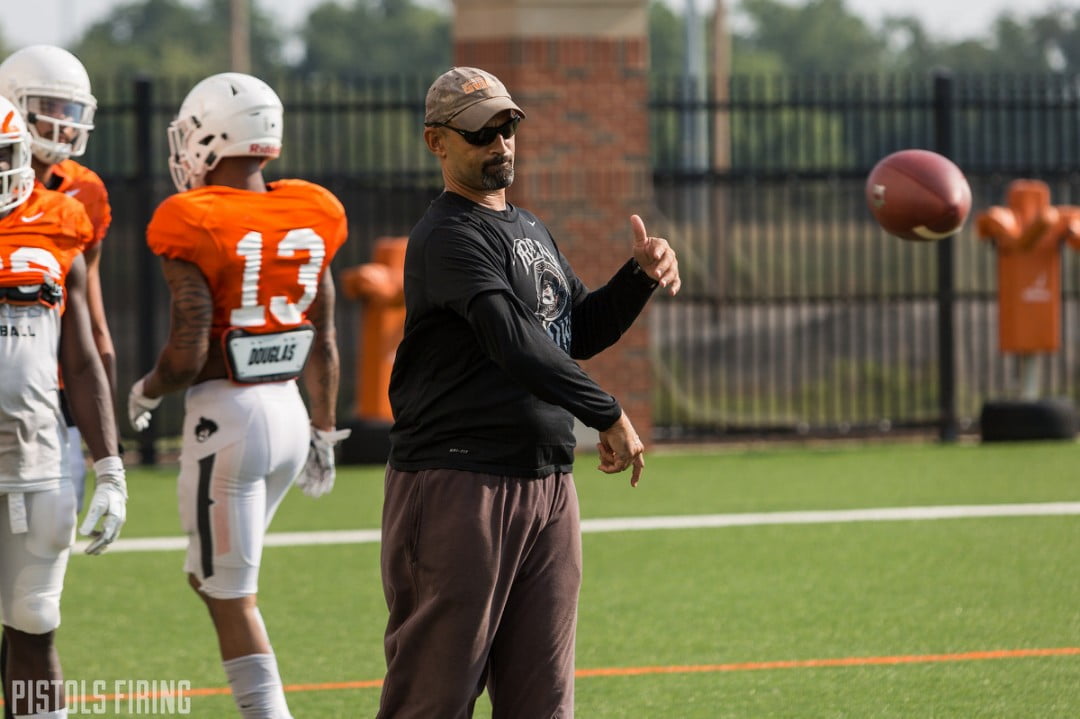 Oklahoma State’s long-time receivers coach, Kasey Dunn, is getting a well-deserved promotion. The football program announced Monday that Dunn — after a short offseason stint of being mentioned as an offensive coordinator candidate at UNLV — has been tabbed as Sean Gleeson’s successor as the coordinator of the Cowboys’ offense.

Dunn joined Mike Gundy’s coaching staff in 2011 and has since risen up the ranks of assistant coaches nationally. Between his recruiting acumen — where he’s reeled in talents like James Washington, Marcell Ateman, Tylan Wallace, CJ Moore and others — along with his developmental talents, he’s earned with time the label of OSU’s most valuable assistant. And now he’s earned a bigger role in Stillwater as OC a year after being promoted from receivers coach to receivers coach/associate head coach.

“We have been in Stillwater going on 10 years and have loved raising our family here and being part of the OSU community,” Dunn said in an OSU press release. “We have an excellent returning cast of players and coaches and a supportive fan base, which makes this an exciting time for Cowboy football. I’m honored to get this opportunity and thankful to Coach Holder and Coach Gundy.”

Dunn was passed over last offseason when Mike Gundy had to replace offensive coordinator Mike Yurcich when he left for Ohio State. When Gleeson left for Rutgers, Dunn was the logical in-house candidate. Insiders at OSU believed Dunn was a favorite to win the job if Todd Monken, most recently with the Browns, was not willing to jump back down to the college level. Monken’s plans remain unclear.

What remains clear, however, is that retaining Dunn was priority No. 1 for Gundy. Dunn has coached two Biletnikoff Award winners since his arrival (Justin Blackmon in 2011; James Washington in 2017) and coached Tylan Wallace to All-America status as a sophomore last season. In his nine years, he’s had 10 All-Big 12 performers. All but one year during those nine years he’s had at least one All-Big 12 receiver.

Dunn doesn’t have play-calling experience, but he’s got enough coaching chops to fill up a room. Prior to his tenure at OSU he coached running backs for the Seattle Seahawks, then coached receivers at Southern Miss before Gundy plucked him. Here’s a look at his career arc via OSU’s website: 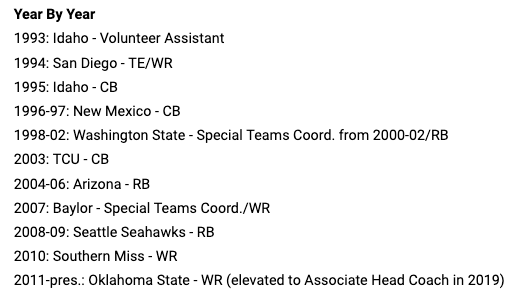 Gundy made it a point to retain Dunn last season by promoting him to associate head coach, which entailed more involvement for Dunn during game week with Gundy and more speaking engagements. Gundy said last year everyone was trying to hire him, and with this move, the only logical upward move from OSU’s OC would be as a head coach somewhere.

“I needed to take care of Dunn so that everybody would quit trying to hire him,” Gundy told the Tulsa World last summer. “I have to do what’s reasonable and to pay (assistants) what’s fair, but also not blow it out of the water.”