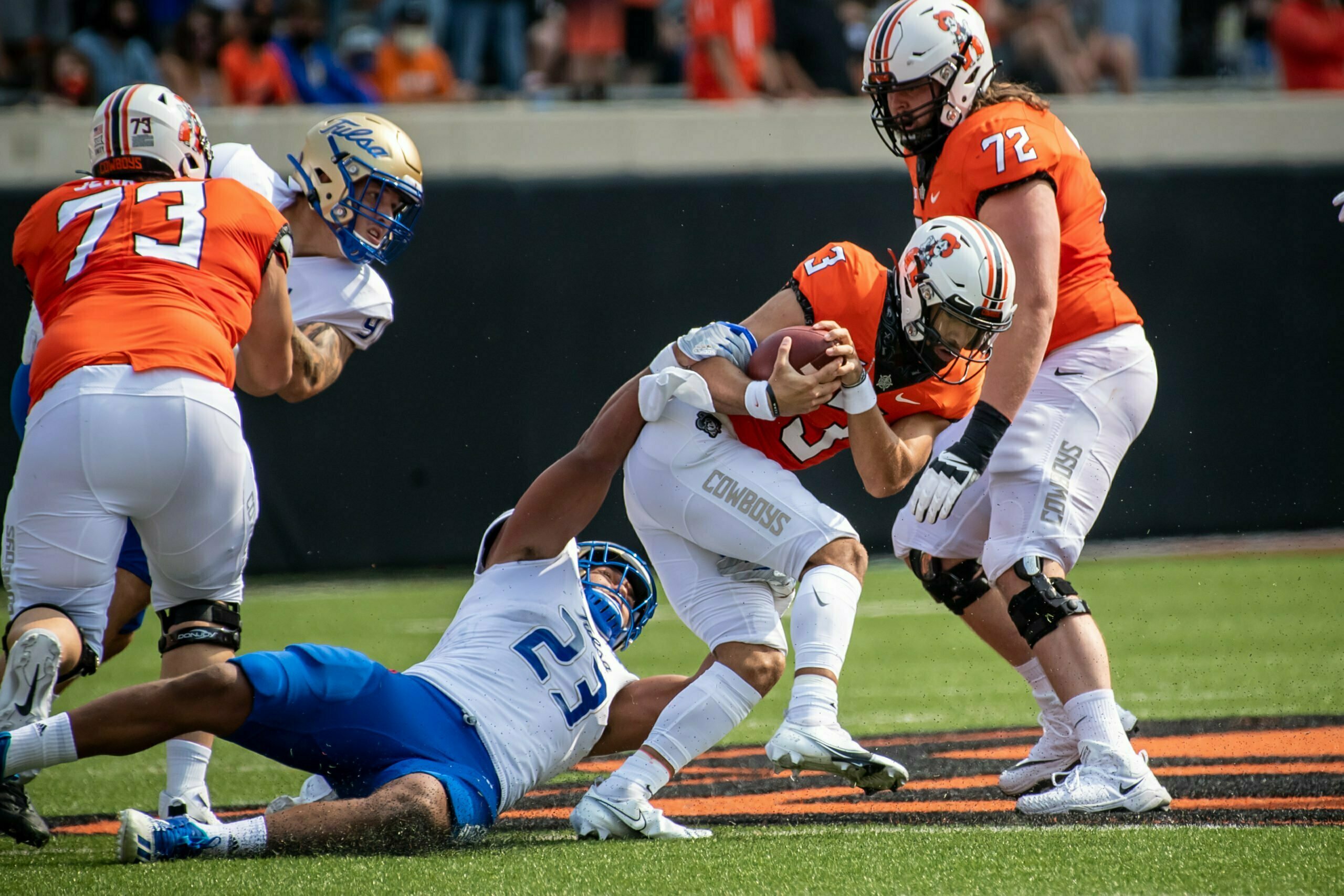 Kasey Dunn’s promotion from receivers coach to offensive coordinator was a fan-favorite hire of the offseason, but just about everything that could go wrong did go wrong in his first game calling plays.

It seemed feasible that Oklahoma State could use three quarterbacks in its season-opener against Tulsa, but not in the manner they were used.

In the Cowboys’ 16-7 win, Dunn lost his starting QB Spencer Sanders after a drive and a play to a high-ankle sprain, so on he went to junior college transfer Ethan Bullock. But after offensive struggles, in came highly touted freshman Shane Illingworth, who hadn’t practiced much within the last few weeks because of COVID-19 contact tracing.

“That was interesting, and they’re all slightly different,” Dunn said. “Spencer and Shane are on opposite ends of the spectrum, but it was certainly a challenging day at times, but our guys responded.

“… It sorted itself out at the end. I’d love to have restarted that thing again and obviously go back and restart from quarter No. 1 knowing what I know now, but it was a great win. It was a great team effort.”

OSU was supposed to score many more than 16 points in Dunn’s debut at OC, but without Sanders and with a few offensive linemen also bowing out to injury, things started getting dicey.

The Cowboys mustered just 287 yards of total offense, well below what Sean Gleeson, Mike Yurcich, Todd Monken or Dana Holgorsen put up in their debuts. But those debuts weren’t navigating a pandemic that ended spring ball and offered an odd preseason.

Without Sanders in the game, the Cowboys attempted to rely on the running game, but Tulsa predicted as much. OSU ran the ball 50 times at just 2.8 yards a carry. The Cowboys threw the ball only 20 times Saturday.

The balance of OSU’s offense seemed to come back when Illingworth got in. But what was different and why didn’t he get the call earlier?

“I can’t really answer that until I get back in and watch the tape, but [Illingworth] flipped up a couple of balls,” Dunn said. “He threw it to a pretty good wide out in [Wallace], and [Walllace] caught it. So at the end of the day, that’s kinda what it was for Shane. He’s a poised player.

“… It was a pretty good battle with him and Ethan when Shane basically ended up vanishing for a little bit of time [because of contact tracing], but at that time it was very, very tight. Obviously with Ethan getting more time, more reps, more snaps, us sliding him in there with the ones at times, certainly he gets the nod in that situation.”

The 16 points OSU scored against Tulsa is the same amount it was able to score against Oklahoma last season, but all that matters is that OSU, and offensive coordinator Kasey Dunn, are 1-0.

“You lose your quarterback, essentially on the first series of the game in the first game of the year, and everybody’s going, ‘Holy crap, what the hell happened?'” Dunn said. “But [Bullock and Illingworth] stepped in and did a solid job. Hats off to Shane, he stepped in a moment that we needed a couple plays. He found the right couple of guys, got them the football, got protection settled up and did a nice job of standing in the pocket.

“I’m excited with where we’re heading with that young guy, and hopefully we get Spencer back soon.”