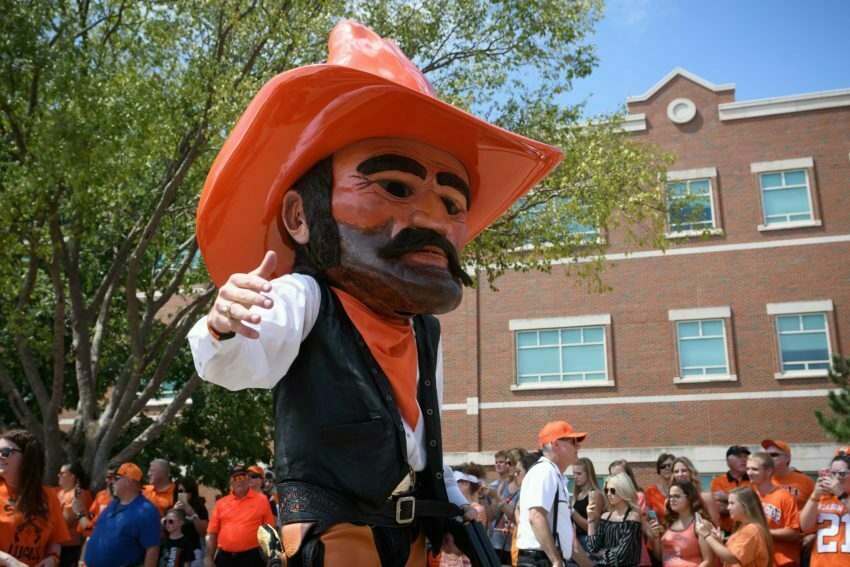 Ok, it’s time to regroup, cast off the sorrows and cobwebs, and get ready for another week of Oklahoma State football! That means another week of our competition series, King of the Game!

This week’s enemy picks come from Zach Mason, who also gave us some great insight into this year’s Tech team, which you can find in our “From the Other Side” post.

Here are this week’s bets:

Bet Against the Spread: Texas Tech — After last week, I’m not ready to trust the defense enough to go with -9.5. This is a night game in Lubbock against another offense that knows how to score. Plus, the longer this win streak goes against Tech, the more nervous I get every year it will come to an end. I think OSU wins, but not by more than 9 points.

More Passing Yards: Mason Rudolph — After last week’s debacle, I’m going to ride with Rudolph. I know Gundy likes to run the ball a LOT more than  Kingsbury, but I think he’s going to let Rudolph sling it.

Over/Under: Under — Last week only five OSU receivers caught passes. I think this is a close game, which means the primary OSU targets record catches. Namely Washington, Johnson, Ateman, McClesky, and Stoner. Tech will get it to seven different guys, but that’s not enough  to take the over.

King of the Game: Keke Coutee — Keke Coutee owns the king of WR names in the Big 12 and he will be the leading receiver in yardage on Saturday. He currently leads all Power 5 wideouts in yards per game. Tech has several others but he’s the obvious deep threat and Shimonek will continue to feed him the ball. He’s far and away Tech’s No. 1 option receiving 26.8 percent of the targets.

Prop Bet: There will be at least two trick plays in this game, including a fake punt/field goal.

Bet Against the Spread: Texas Tech — I’ll take Tech against the spread. I think the Cowboys pull it off and make it nine-straight wins, but it’s going to be closer than we want it to be.

More Passing Yards: Mason Rudolph — Rudolph by a hair because the Cowboys are going to need it to win. The running game will be important to both offenses, but Tech has been much better against the rush than the pass through three weeks.

Over/Under: Under — OSU has seen eight, eight, seven and then five receivers catch as pass as the season has progressed. Chris Lacy appears to be still out and Tyron Johnson may be working his way out of the doghouse. After not making the trip to Pittsburgh he got exactly zero targets against TCU.

King of the Game: James Washington — Again, this should be a close one, so I’m going with Rudolph’s go-to receiver, Mr. President.

Prop Bet: My worst is probably an accurate description based on four weeks’ worth of predictions. Here you go. Either Dillon Stoner returns a punt for a touchdown or Jalen McCleskey fumbles one.

Bet Against the Spread: Texas Tech — Man….after what happened last week, I just don’t know anymore. If last year’s game is any indication of this year’s, I’m going to be a wreck. Texas Tech looks vastly improved on defense than they did last year (which to be fair, isn’t saying much). In the famous words of Lee Corso, “It’ll be closer than the experts think.”

More Passing Yards: Mason Rudolph — This is a toss up to me. I’ll go with Mason purely because I think Tech will try to be much more balance offensively than OSU will. Tech rushed for 200 yards last week on the road in Houston. I think there’s a possibility OSU falls behind and asks Rudolph to throw it 50 times.

Over/Under: Under — To me the answer depends on the status of Chris Lacy and if OSU decides to even decide to utilize Tyron Johnson this game. I’ll lean towards the under on this one. Tech had 8 guys with a catch in a close road win last week while OSU had just 5. It is definitely possible, not sure if see it this game.

King of the Game: James Washington — Here’s Washington’s game chart against Tech in his career:

I’d be an idiot to neglect those numbers. He’s led the team in yards and reception in each of the last two meetings against them. They haven’t been able to cover him and it won’t start now.

Prop Bet: Either Tech or OSU fail to score a touchdown in a quarter — OSU didn’t score in the 4th quarter of last year’s game yet managed to hang on and win. Additional prediction separate from the first one is I really feel this game could be decided by a special teams impact play (long return or TD) or a gaffe (blocked punt/FG or fumble return). Oklahoma State’s return game has been abysmal and Tech missed 50 percent of their field goals last week.

Bet Against the Spread: Texas Tech — I’ll take TTU plus the points.

Over/Under: Over — I’ll take the over on receivers with a catch.

Bet Against the Spread: OSU — OSU covers but just barely.

More Passing Yards: Nic Shimonek — Shimonek should have more as we will rely on the run game more.

King of the Game: Marcel Ateman — Ateman. He needs to step up.

Prop Bet: Both teams will have at least four plays over forty yards and at least one turnover for each team.