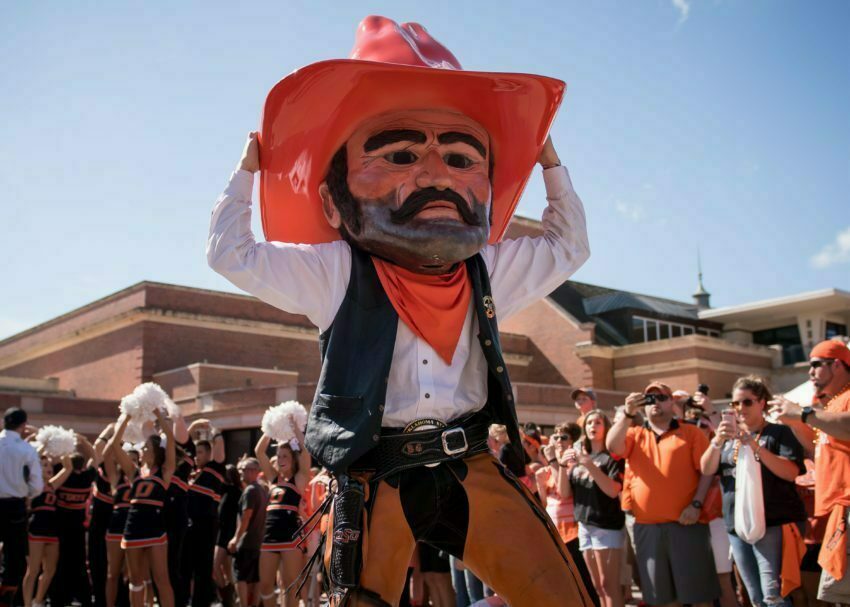 The Cowboys are on the road in Austin this week to face Texas which means we’ve got some picks to make. While Mason Rudolph attempts to go 3-0 in his career against the Longhorns, the PFB team is just hoping to close the gap on the guest pickers.

Before we get to the picks, let’s make sure everyone knows the rules:

This week’s enemy picks come from Cody Daniel of Burnt Orange Nation, one of two Texas Longhorn SBNation blogs (it’s the better one).

Our fan picks come from Tyler “TBeezy” Beets, who laid down some classic smack-talk on Texas.

Yes Tbeezy. You did. (Bringing that loss up will never get old).

Bet Against the Spread: Oklahoma State— I don’t think Oklahoma State ever really pulls away, but I think they at least win by 10.

More Third Down Stops:  Oklahoma State – This is number of stops, not better third down defensive percentage. I think Texas has more 3rd down opportunities than OSU does, allowing OSU to get more stops. It’s just a numbers game.

Over/Under: Under — Hill has not proven to be a smash-mouth back. That’s more J.D. King’s style which is why I actually think King gets more carries in this game than Hill does.

King of the Game: Malik Jefferson – I almost went with an OSU guy here. However, I think OSU rotates too many guys to allow one to rack up a ton of stats. Secondly, Jefferson already has 54 total tackles on the season. He’s a beast and I think Texas rides him as much as they can.

Prop Bet: With the run game having trouble getting its footing, three Oklahoma State receivers end the day with 100 receiving yards.

Bet Against the Spread: OSU – I think this is a close one throughout but the Cowboys win by 10-14. Something in the range of 35-21.
More Third Down Stops: Texas – The numbers would tell us Texas. Their offense is third behind only TCU and Oklahoma State in the Big 12 in third-down completion rate. But on defense the Longhorns are best in the league at getting off the field on third down and OSU is worst. A lot of those bad third-down numbers were against mobile quarterbacks like Tulsa’s Chad President and TCU’s Kenny Hill. And just like Texas’ Sam Ehlinger.
Over/Under: Under – But partly because Mike Gundy remembered he had another running back during the bye week. J.D. King’s nine carries were also due to the fashion in which OSU was blowing out Baylor, but I think he gets a handful of Hill’s runs.
King of the Game: Jordan Brailford – I’ll go with Brailford because I think he can have some success against a rag-tag Longhorn offensive line and for the Cowboys to do what they want defensively they will need to put pressure on Ehlinger while still containing him. The crafty Brailford should win most of those battles and facilitate that.
Prop Bet: Tyron Johnson finally breaks loose on a kickoff return and gets his second TD of the year.

Bet Against the Spread: OSU – A banged up Texas squad plays a fresh and focused OSU squad at 11:00 a.m. I don’t think Herman has ever faced a passing attack quite like this. Glenn Spencer plays QB spy on Ehlinger and forces him to beat OSU through the air. OSU wins by at least 13.
More Third Down Stops: Oklahoma State – Toss up here. OSU hasn’t been great at getting off the field on third downs. Texas, on the other hand, forced OU to a 33-percent conversion rate and KState to 18 percent.  I’m going to guess that Spencer formulates a solid defensive game plan to contain the freshman quarterback.
Over/Under: Under – Texas has not allowed a 100-plus yard rusher since Maryland. Since that game, they have faced several very talented backs. Here’s how they have fared.
• Ronald Jones II (USC) – 47 yards
• David Montgomery (ISU) – 34 yards
• Trey Sermon (OU) – 96 yards
I’ll say Hill comes close, but not over 100…
King of the Game: DeQuinton Osbourne – OU was able to cause disruption up front and force Ehlinger from the pocket numerous times. I say OSU is able to fluster Ehlinger and get some key tackles for loss and maybe a sack or two.
Prop Bet: I think we see four different players take direct snaps this game. Two different Texas quarterbacks, Mason Rudolph, and maybe like a wildcat look with McCleskey or Hill.

Bet Against the Spread: OSU – Is 10 points close? Eh, close enough. I think Texas will hold the Pokes to well below their season average, just as it has with every opponent since Maryland. But until Texas proves otherwise, teams don’t need to pour on 50 points to win. I’ve got OSU by 10.
More Third Down Stops: Oklahoma State – Simply because Texas will need to keep drives alive on third down to have a chance. Oklahoma State won’t. I wouldn’t be surprised if the Cowboys enjoy 2-3 drives where big plays prevent OSU from even being faced with a third down.
Over/Under: Over – Over because if Texas is going to have a chance, it will need as many bodies in the secondary as possible. With the defense so focused on slowing the passing attack, Hill should find more than a few big plays throughout the game against smaller fronts.
King of the Game: Jordan Brailford – I’m going with Jordan Brailford here. As I’m sure you know, the Texas offensive line is a rag-tag unit largely comprised of reserves and underclassmen, and that’s been evident on the field. It may not exactly show up on the stat sheet since Sam Ehlinger has done an excellent job of escaping pressure, but Brailford should be a mainstay in the Longhorns backfield on Saturday.
Prop Bet: I’ll bet on no fewer than nine camera shots of Tom Herman standing on the sideline with his arms crossed, chewing a massing glob of Hubba Bubba or whatever it is that he prefers. Anything less (especially in a loss) would be a letdown.

Bet Against the Spread: OSU – UT’s weakness in their defense is against the pass, as long as the Pokes don’t turn it over OSU covers.
More Third Down Stops: Oklahoma State – I was leaning towards UT since they are sixth in the nation in third down stops percentage compared to 112th for OSU. I say OSU because we have one of the fewest third-down attempts from our offense and has the second-best conversion percentage where UT has one of the highest third-down attempts. I just don’t think UT will force enough third downs.
Over/Under: Under – OSU passing game should feast on the UT secondary and the Longhorns DL has a few NFL guys on it with one of the best LBs in the Big 12.
King of the Game: Poona Ford – I’m concerned how Johnny Wilson matches up with Poona Ford if Lundblade can’t go. Ford seems to be having an excellent season and Wilson hasn’t matched up with anyone close to his caliber yet.
Prop Bet: 22.5 Carries for Justice Hill. You can look at it two ways: 1. Gundy & Yurcich are forcing a run game that isn’t working or 2. The Cowboys have control of the game with Hill. I’ll say under. The pass game against their secondary is just too lethal and I believe/hope they are trusting J.D. King more.
Related Topics: