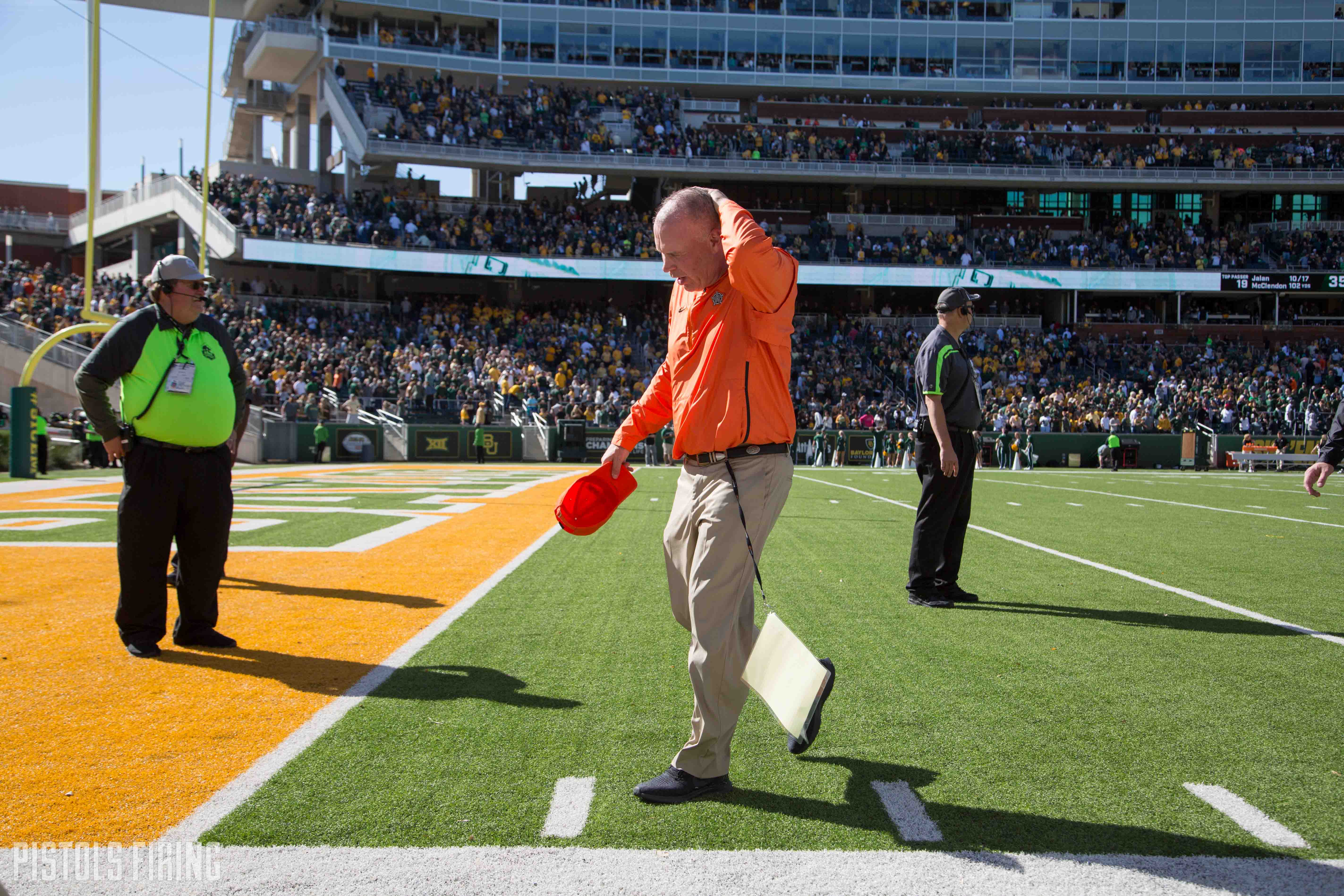 The Cowboys out-gained, out-possessed and out-played the Bears in Waco for much of the afternoon, but when the clock hit 0:00 there wasn’t much for the visiting team to celebrate.

The sight (and result) on Saturday further cemented what we have already gathered and learned about this Oklahoma State squad through nine games.

Different teams earn different monikers. The “Cardiac Cowboys” played everybody close but almost always found a way to edge out the win under Mason Rudolph’s leadership. I think most OSU fans would love to have that problem now. Maybe we should call them the “Penalized Pokes.”

Mike Gundy-coached teams have historically played clean, not committed turnovers and rarely shot themselves in the boot. That is no longer the case. The Oklahoma State record for committed penalties in a season is 103 back in 2002. OSU is currently on pace for 98 (if it makes a bowl game). Lack of discipline and poor, sometimes head-scratching, decisions are now a calling card for this 2018 Cowboy team.

To sum it up in just one word, I’d have to go with inconsistent.

One week after tying a season low with four penalties in a nearly spotless win over No. 6 Texas, the Pokes were flagged for 12 transgressions, the most since 15 flags were thrown at Gundy’s feet during the loss to Arizona back in 2012.

Those reprimands were predictably at the forefront of his mind after the game.

“We’re not a good enough football team to have that many penalties and a special teams blunder and give up the touchdown,” Gundy said.

Here’s a look at all 12 penalties that were accepted against the Cowboys inside McLane Stadium where OSU is now 0-3 all-time.

Only three of those penalties were called on offensive players. Two false starts from your O-line isn’t great. But the defense? Woof.

Three face mask penalties (!), two by the same player. That has to be one of those historically significant stats that will never show up in a media guide. For as good as he played a week ago, the four penalties on Green were not good.

One of the eldest of OSU’s secondary, Green basically earned an assist on Baylor’s first scoring drive early in the second quarter with a pair of needless penalties to both kick-start it and put the Bears into scoring position.

When asked about what changed for this defense down the stretch, Gundy didn’t mince words.

“I think it’s penalties,” Gundy said. “I think we prolonged drives, and again, I can’t — it’s hard for me to recollect every drive but we are extending drives and giving them free 15-yard penalties, and that’s a huge factor.

“It’s difficult to get stops and then certainly when you’re giving them 15, 20 yards a drive on penalties, that’s where it would start for me, just too many undisciplined penalties.”

The Cowboys had their sixth win (and guaranteed bowl eligibility) within their grasp and they let it slip right through those fancy Nike gloves. The M.O. for OSU teams used to be resiliency, playing clean and focused, and discipline. But this team looked about as focused as one that spent the trip to Waco watching its own highlight videos from the Texas game.

“What I told the team was: Even after all that, you had a chance to win the game,” Gundy said. “But I’m really disappointed in being undisciplined with all the personal fouls, the face mask, chop block, late hit. Those are things that shouldn’t happen.

“You know, it’s interesting, we talk about it, being disciplined and we were undisciplined today, and playing smart football and we didn’t play smart football. We have to do a better job of coaching it. The general rule is: The players will show you how well you’re coaching them and what you’re working on on Saturdays, so that’s what I take out of this.”

Bowl eligibility is still on the table as the Pokes have three games to win one, but they had a real chance to build off of that primetime win over Texas, and just didn’t. Homecoming looked like it might be a turning point, but as of right now it’s proving to be an exception, yet another rule for the Cowboys to break.