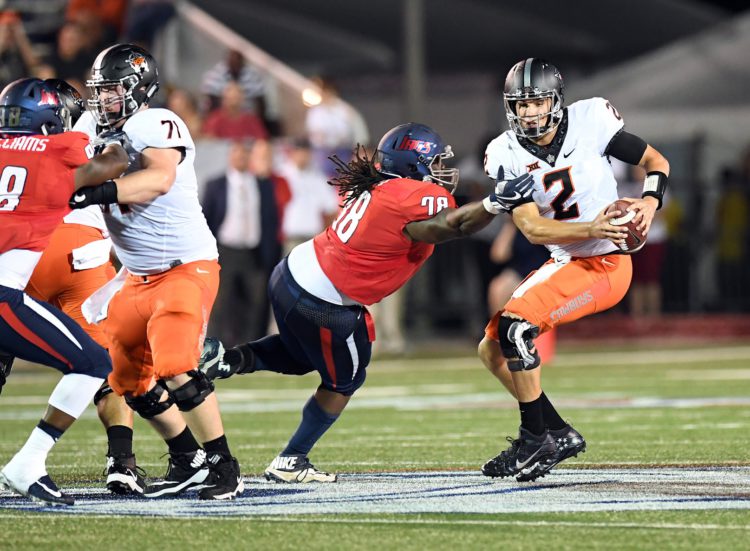 Oklahoma State went out and did exactly what they needed to do on Friday against South Alabama in dominating an inferior team, incurring minimal injuries and not exerting a ton of effort.

Between David Bowie and BlackJack references, I was able to watch the film of the first three quarters again, before the backups were substituted. Based off what I’ve seen, South Alabama isn’t a quality opponent, so please have that in mind when reading these observations. Nothing I saw indicates this being more than a 4-5 win team.

Let’s start with the offense line, which will most likely be the hot topic of criticism this week after a below average performance with the ground game.

Pass protection was phenomenal, which is expected as USA didn’t really have any feared pass rushers.  Of 24 true drop backs, Rudolph had 21 clean pockets. The three exceptions were mainly caused by extra pressure applied by the USA defense, including two QB hurries that caused incompletions. There were a few examples of free blitzers coming off the edge, but for the most part the OL held up very well.

I paid special attention to Aaron Cochran as he received a little criticism for his performance last week, and thought he was much better this week. Tevin Jenkins did play a few series at RG in for Larry Williams, and thought both held up well also.

Larry Williams is beat here, I really don’t understand why. He was in the right position then came off his block to help Lundblade, mental mistake.

I don’t have a lot of notes on pass protection. Limited pass rush threat, and a strong performance from the OL in pass protection led to a wealth of time for Rudolph to throw the ball.

The run blocking is a different story, I made pages and pages of notes. Before you put the OL on blast, it should also be noted that the running backs didn’t do them many favors.

To start off you always wonder if the blocking was poor, or if the defense was really keying in on the run to make things difficult. I charted the amount of players in the box for each play that wasn’t a clear passing down, so I omitted 3rd and long and most of the drive at the end of the first half.

USA ran Cover 1 for a good majority of the game, with mostly man coverage across the board with one high safety. Cover 1 generally allows you a little more flexibility to move some people around to help support the run game. Based off the activity of the LBs and safeties, you could tell that stopping the run was an emphasis, but the numbers above aren’t overwhelming and should’ve opened up plenty of pro-OSU numbers in the box for their running game.

To be clear, this line isn’t an elite run-blocking unit. By no means did the OL dominate like maybe they should, and clearing consistent running lanes by mauling DL didn’t happen often. However, there simply weren’t a lot of missed blocks here, and although the running lanes weren’t huge, they were there. This is where we get back to holding some of the RBs accountable.

I thought Hill looked very hesitant on his run style and vision was lacking for sure.  Here are a few examples of what I’m talking about. You have a huge hole between RG and RT, 1 on 1 vs. a LB. OSU will take that matchup all day with Hill’s open field ability.

Cochran has seal on left side, we know that the right side DE is going unblocked and likely to crash down. Instead Hill takes the run away from play side and cuts back right into unblocked player. Not great.

This one is the worst. He could’ve easily bounced this outside left from the handoff for a big gain, there was also a cut back lane to the right once he cleared the LOS. He took neither.

Here is a great example of strong vision. This play is designed to go right and he cuts it up field into a monster hole, then cuts again for an extra 2-3 yards. This is what we are used to seeing with Hill.

There were few missed blocks or assignments from the OL in general, I think the biggest issue is just a lack of physicality overall. I’m liking what I’m seeing from Larry Williams, but he still needs to improve.  Outside of Keyes (watch here), no one shows the high physicality level that a really strong rush team has. From a run game perspective, you would love to see the OL jumping off the snap and winning the line of scrimmage. This OL doesn’t miss many blocking assignments, but DL are left with opportunities to shed blocks and make plays.

Here is a great example of what I’m referring to from a physical perspective. Watch how Keyes/Lundblade drive this block 10 yards down the field.

Here is a nice blocking set where Lundblade and Keyes are able to seal a nice hole. This simply didn’t happen enough.  The USA DL were able to fill the gaps they were responsible for too often.

Here is Cochran crashing down well to open up a nice hole for a first down.

Overall I think the run blocking was average but OSU’s RBs left a lot of yards on the table. OL coach Josh Henson needs to continue to preach a physical/violent culture with the offensive line to continue to have success on the ground.