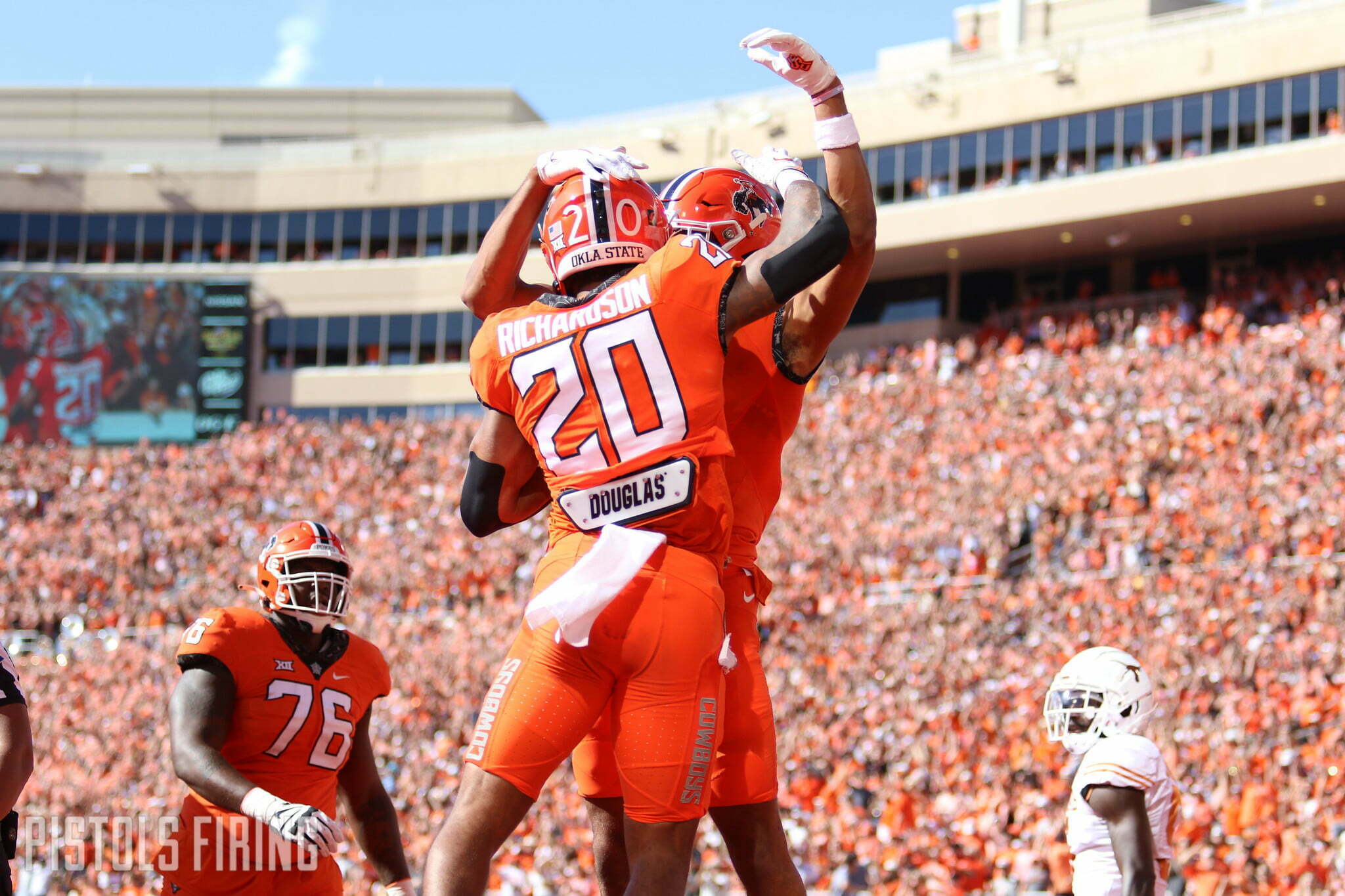 Folks, I’m happy to report that the football game played in Stillwater, America, on Saturday afternoon was indeed a good one.

A really, really good one.

OSU outlasted Texas 41-34 after mounting a double-digit come-from-behind effort. OSU trailed by as many as 14 points in the game and by as many as 10 in the second half. But as the game wore on, OSU, even banged up, got better. The Cowboys staged their comeback behind 17 unanswered points, culminating with a 41-yard catch and pass from Spencer Sanders to Bryson Green in the final few minutes.

Here are the full updates and highlights from the game in our live blog. Updates below are posted in reverse chronological order.

Fourth quarter, 1:00: OSU on fourth and four punts it. Texas will take over from the 24. Has to go 76 yards to either tie or win it in regulation.

Fourth quarter, 1:23: Jason Taylor II with a HUGE interception on fourth down. Pokes lead 41-34 and take possession. Texas has three timeouts remaining but OSU can end it here. Hopefully Taylor is OK. It looked like he limped off after injuring his knee.

Fourth quarter, 3:09: Sanders gets one forced to Bryson Green, and BRYSON GREEN DOES THE REST. POKES LEAD 41-34. That’s 17 straight unanswered points for OSU.

Fourth quarter, 4:17: On a critical third and long, Spencer Sanders finds John Paul Richardson running across the middle to convert for a fresh set of downs. HUGE throw into tight coverage, even bigger catch by JPR, who held on despite getting absolutely clobbered.

Fourth quarter, 5:10: Quinn Ewers and Xavier Worthy JUST miss on a connection in the end zone. Worthy was wide open, but Ewers overshot him. Crisis averted for OSU defense because not only did they fail to convert on third, but Texas misses its ensuing field goal attempt. WOW.

Fourth quarter, 9:54: We have ourselves a tie game, folks. It’s 34-34 after Spencer Sanders connects with Brennan Presley over the middle for a red zone score. Whoooo boy.

END THIRD QUARTER: Been a lot of bad/missed calls today that cost OSU. This one was significant. Watch to the end.

Third quarter: Finally, some points. Texas strikes first in the second half with a field goal with 2:10 left in the third quarter. OSU trails 34-24.

Third quarter: Lot of back and forth in the first half but it has been a defensive tussle thus far in the second half. OSU right now has its drive stall but punts to try and play field position. Still trailing 31-24 as Texas takes over.

Second quarter, 2:40: TD Pokes! It’s Texas 31, OSU 24. Dominic Richardson punches it in AGAIN, this time from 2 yards out. Huge drive to answer. Jaden Nixon with some serious juice injected into the running game on that drive. Ran out of his shoe and looked really good doing it. Expect more of him to mix it up in the running game, which has stalled last few games.

Second quarter: An important in-game update. I … did not know this.

Second quarter: Stephon Johnson Jr., the true freshman receiver, getting some big run here today. And boy has he looked good. Look at this catch.

Second quarter: OSU defense limits Texas’ offense to a field goal. That unit is having some struggles in the first half but still grinding and keeping OSU in this. Texas leads 24-17.

Second quarter, 11:16: Another response by the OSU offense when it was needed. Spencer Sanders had some huge runs to push the ball down the field, and Dominic Richardson once again punches it in, this time from one yard out. It’s 21-17 Texas.

Second quarter, 13:28: My god. Bijan Robinson with a house call again. Just roared out of the backfield and no one had him. He’s one of the best pass-catchers on the entire Texas team. Just inexplicable busted coverage. Texas leads 21-10.

Second quarter, 14:15: OSU attempts to punt and pin Texas deep in territory, but Tom Hutton’s punt is blocked. Texas takes over, up 14-10, in favorable territory on the right side of the 50.

First quarter: Call on the field is that Brennan Presley fumbled the punt return and Texas recovered. Play is reviewed and they say it stands. Didn’t appear the ball even hit Presley, but of course they could find definitive evidence in review to overturn the wrong call initially. Go figure!

First quarter, 9:39: Good guys go back on top. Dominic Richardson caps a quick responding drive to punch it in the end zone from four yards out. 10-7 Pokes. Took just 2:22 to March down the length of the field.

First quarter: Bijan Robinson is #good. Pokes strike first with a field goal, but the talented Texas tailback responds with a house call to give UT the lead. Wow.

Pregame injury news: Here’s the full injury report in all its glory:

But really really, here’s the actual report from Dave Hunziker on the radio pregame. Starting to make a lot more sense why Mike Gundy earlier in the week was very against divulging any injury deets. This team is really, really banged up right now.

Pregame uni reveal: This helmet is so bucking beautiful. Wow. 10/10.

Pregame buzz: Sounds like a lot of folks are counting out the Cowboys. We love to see it. (Shout out to Desmond Howard!)