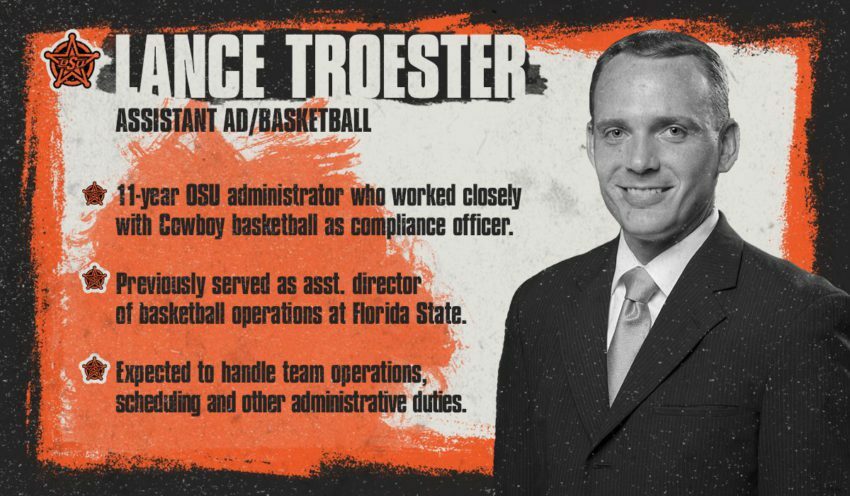 OSU men’s basketball coach Mike Boynton has made another update to the staff.

On Friday, after presumed assistant Michael Fly stayed at Florida Gulf Coast, Boynton named Lance Troester the associate athletic director/compliance for men’s basketball, after serving as an administrator since 2006.

#okstate administrator Lance Troester has made the move to the Cowboy hoops staff. Welcome aboard @LTroester!

Troester will oversee the day-to-day operations and scheduling for the mens basketball team. Troester seemed thrilled at the opportunity:

“I would like to thank coach Boynton for this wonderful opportunity to join his staff,” Troester said. “I’ve had the opportunity to get to know him over the last year, and I’m very excited about the direction of OSU basketball.

“I’ve been fortunate enough to work closely with the men’s basketball program over my 11 years at OSU, and I’m excited about joining such a historic program in a role I have such passion for.”

Boynton seemed just as excited to pull Troester over from an administrative role to the associate AD/compliance gig.

“Lance brings tremendous value to our staff as our new assistant AD for basketball, and we’re excited to have him come on board with us,” Boynton said. “He’ll obviously be involved in the day-to-day operations of our program, but he’ll also be heavily involved with our on-campus activities from a recruiting standpoint.

“Most importantly, he’ll be someone who keeps the staff organized internally. He has great experience in this role from his time at Florida State, and he’s someone that brings a great deal of compliance knowledge as well. I look forward to working with him going forward.”

Troester is no stranger to the Big 12. In addition to his 11 years in Stillwater, he attended Iowa State University for undergraduate, then went on to get his master’s degree at Florida State, in sports management.