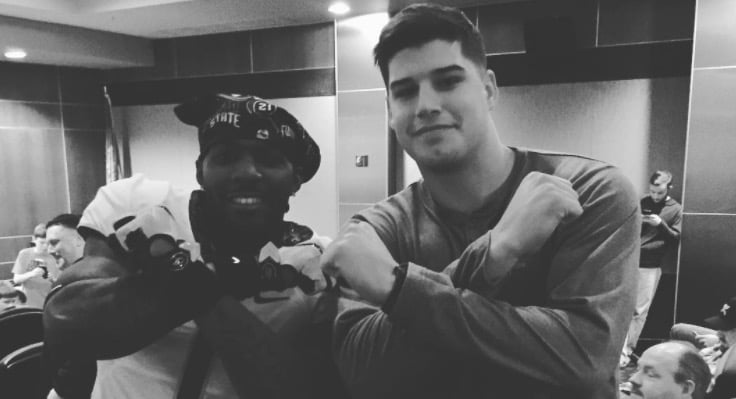 The first quarter of 2016 for Oklahoma State athletics included a new football class that (at the last minute) included Calvin Bundage, the new OSU football uniforms, the end of the Travis Ford era (RIP) and the beginning of the Brad Underwood era. For the sake of the blog, I wish Mike Holder would have stretched the coaching search into about three weeks instead of three days, but it’s pretty clear he made the right decision.

1. Dez and Weeden show off new unis. While not as exciting for me as the original new uni reveal in 2011, this was about as well as you can unveil a uniform in 2016. This was also the first time I remember thinking, “Snapchat? What is Snapchat? Why are the uniforms on Snapchat right now and I can’t see them?!”

2. Barry J transfers to OSU. This should have been exciting, and it was. But there also should have been warning signs that No. 26 was not the second coming. I think we almost universally chose to ignore those.

3. Travis Ford is fired. This could have happened about three different times. It finally did when ticket sales hit rock bottom. Money talks. Both when you’re losing a ton of it and making it hand over fist. How many times do you think Mike Gundy has mentioned Ford’s contract to Mike Holder? Over/under 999.5?

4. National Signing Day coverage. This was just one big post we updated throughout the day with news on new signees. It’s fun to look back on now that a season has gone by. Turns out this was one of the bigger tweets in recent OSU recruiting history.

5. Coleman Key commits. And you guys wonder why we hit uniforms and QB coverage so heavily.

Doug Gottlieb wants the OSU job. I stand by the fact that he would have been terrific, but I’m glad for Mike Holder’s decision. It has become abundantly clear that Brad Underwood is a top-shelf college basketball coach.