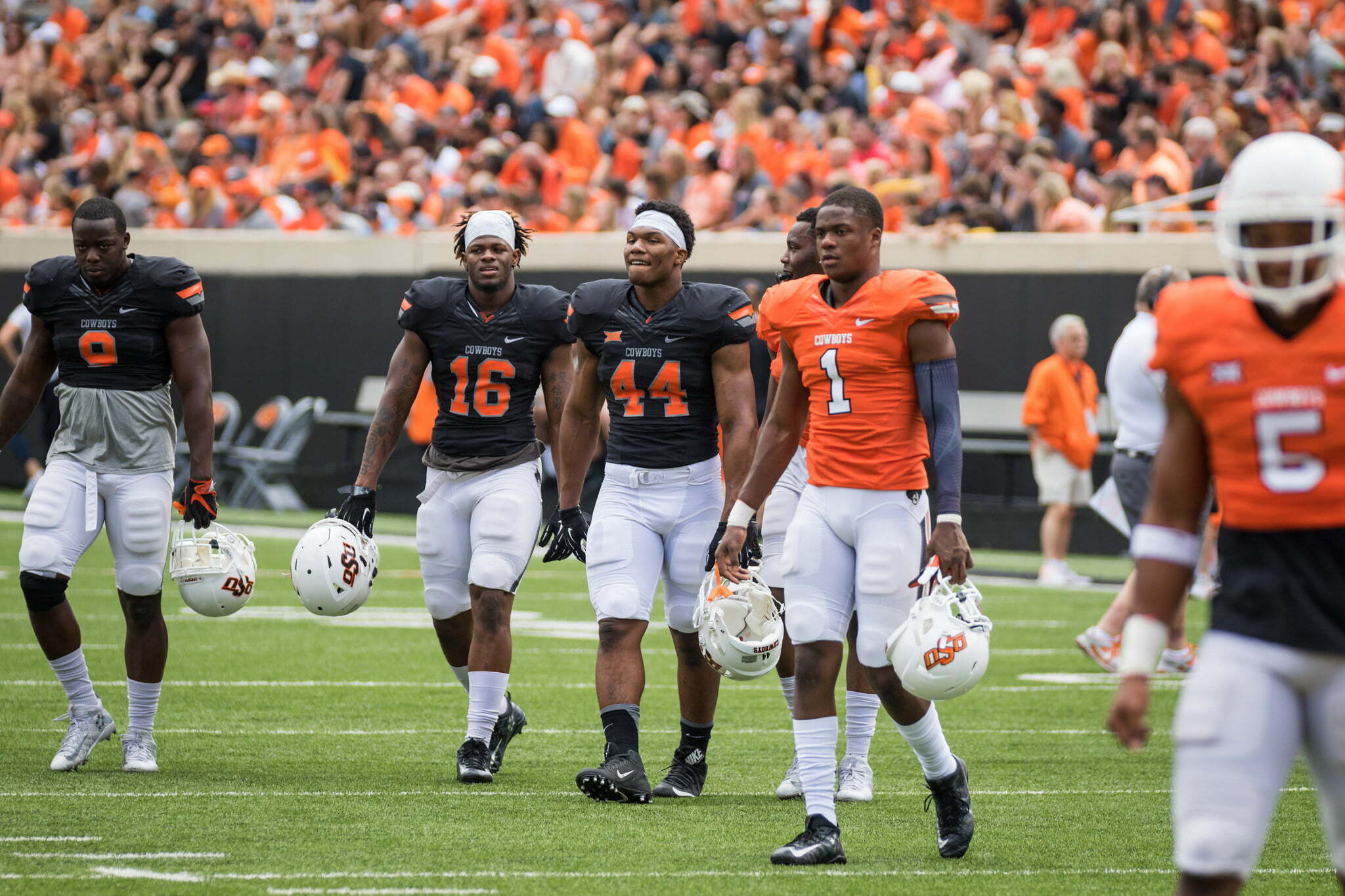 With new TV deals years away and as plans to add more teams to the conference fall off the face of the planet, the organic growth of the Big 12 is going stagnant. Attendance is part of the internal expansion of any conference, and in the Big 12, it has become a problem.

This doesn’t necessarily diverge from a nation-wide trend. But first, let’s take a look at what each team in the Big 12 averaged in home attendance last season.

For a Power Five conference that tries to market itself as the premier group of universities in the nation, having only two schools that average more than 60,000 fans a Saturday is not ideal. When comparing the Big 12 with the other power fives, it ranks at the bottom in total attendance. That mostly falls on the number of teams in the league vs. the others. Three of the Power Five leagues have 14 teams; the Pac-12 has a dozen, and the Big 12 has only 10.

But even when the conference totals are averaged per game, the Big 12 ranks in the center among the power fives (this includes home and neutral site games between teams in the same conference). 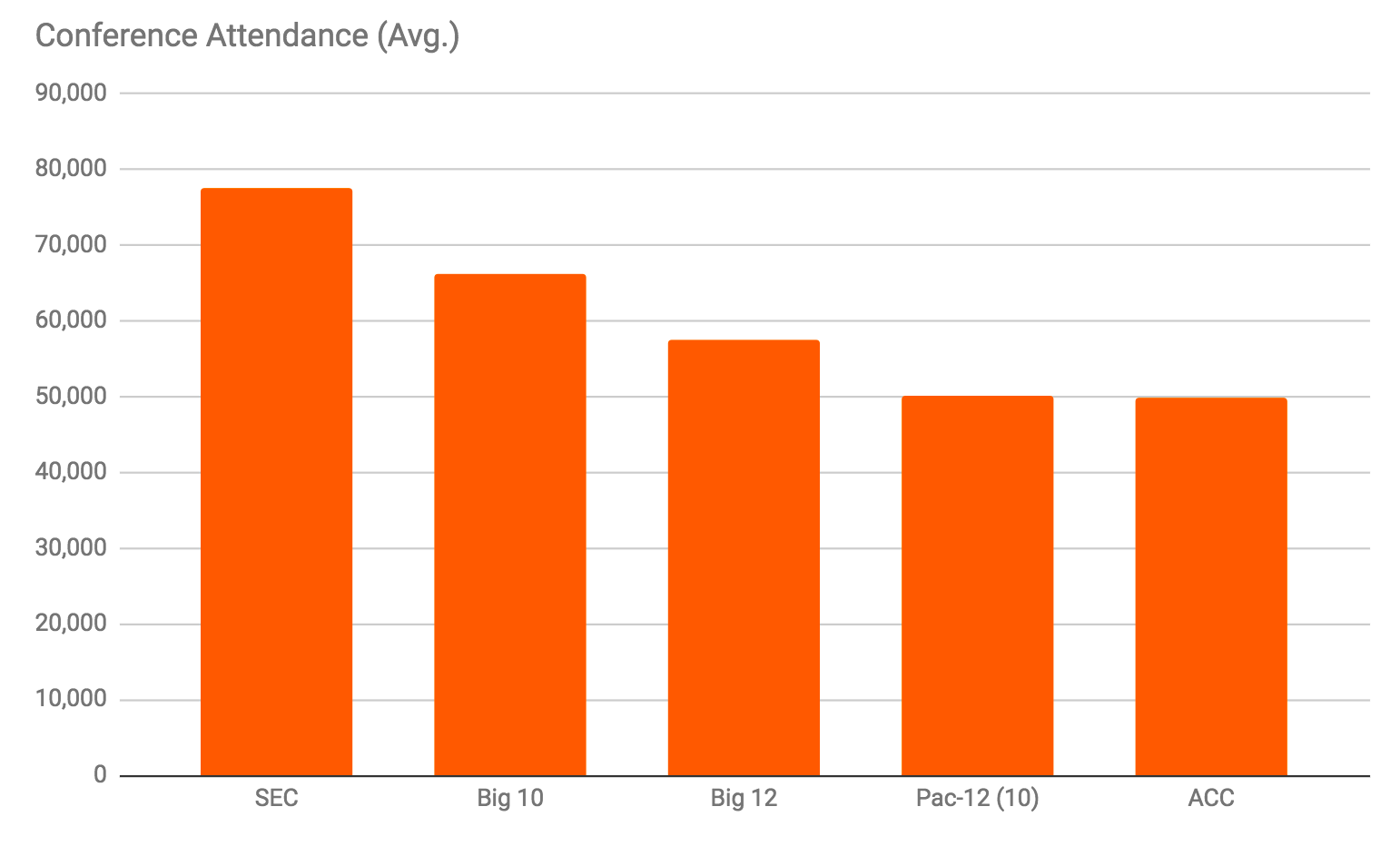 Five of the 10 Big 12 schools hover just below the Power Five average attendance line of 61,024. Those universities include Oklahoma State at 53,814. And these attendance more or less line up with the hierarchy of revenue generated by each conference.

So, in a sense, when Big 12 Commissioner Bob Bowlsby said, “I think our league has the best depth,” at Media Days, he is absolutely correct. When analyzing the distribution of average university attendances, the Big 12 is far and away the most concentrated with seven of 10 schools within a 20,000-attendee range.

But the perception of those numbers is up to the beholder. The SEC has four universities that average more than 100,000 people through the turnstiles every week. You’re getting a more competitive and more consistent league in the Big 12, at least from an attendance standpoint, but you’re also getting far fewer people overall.

Going to a college football game is becoming less popular across the nation. The Mountain West Conference has dropped more than 26 percent in its average attendance since 2006. That’s the extreme, but all except two other conferences are down in average attendance numbers from a decade ago. The SEC and Sun Belt Conference are the only two leagues to report any positive growth.

These numbers are not wildly surprising. TV deals have made it incredibly easy and sometimes more enjoyable to stay home or in the parking lot for the game. Couple that with a mind-boggling spike in ticket prices, only those with a pretty lofty disposable income can and will go to games anymore.

For example, the median price for a Bedlam ticket last year was $190, according to Forbes. And that was cheap that week. Two other games posted higher median prices, including Michigan-Ohio State.

Average Big 12 attendance is down 2.44 percent. That doesn’t sound like a lot, but that comes out to more than 1,400 fewer people per game. That’s almost 100,000 people over the 66 conference games that were played last season. Not that Big 12 teams (or any teams) are hurting for money, but that’s a lot of lost revenue over the course of several years.

And the world is becoming more technologically sound by the day, and it’s astonishing. Bowlsby ranted about 250 words on it at Big 12 Media Days before attempting to address how it would impact the conference.

“Does that have an effect on whether we have bigger venues or smaller venues?” Bowlsby said. “Well, I think you look, and the trend is towards smaller football stadiums, smaller basketball venues because more people are consuming away from the venue. And I think we need to be concerned about that.”

Bowlsby said students and millennials are those of particular concern with the change away from live, in-person sporting events but didn’t have any direct plan to combat that and keep butts in seats.

“How it’s going to be distributed? I mean, we may be watching the Super Bowl on the insides of our eyelids before too long,” he said. “I wish I knew that answer, but I think the best things we can do is partner with people that are on the cutting edge and ride along as they answer those questions.”

Smaller stadiums is both the trend and the answer. At OSU, Boone Pickens Stadium recently was shrunk from 60,218, down to 56,790 to create more room for fans, said Andy Sumrall, OSU’s assistant athletic director of ticket operations.

“Some of the biggest issues we have come from someone sitting on my seat or half of my seat,” Sumrall told the Tulsa World. “Seats are just too close together.”

That is half of the story though. There has only been one true sellout at BPS, and it came in 2013 against Baylor. So a decrease in seating capacity essentially means a better (more comfortable experience), more sellouts and potentially higher ticket prices to make up that revenue.

Will that work? Who knows. The NFL is on Amazon now Thursday nights, so why even lounge in your recliner anymore? These are unanswerable questions in 2017, like Bowlsby said. But so long as nothing is done to answer them, Big 12 attendance will only continue to slip lower on the national scale.