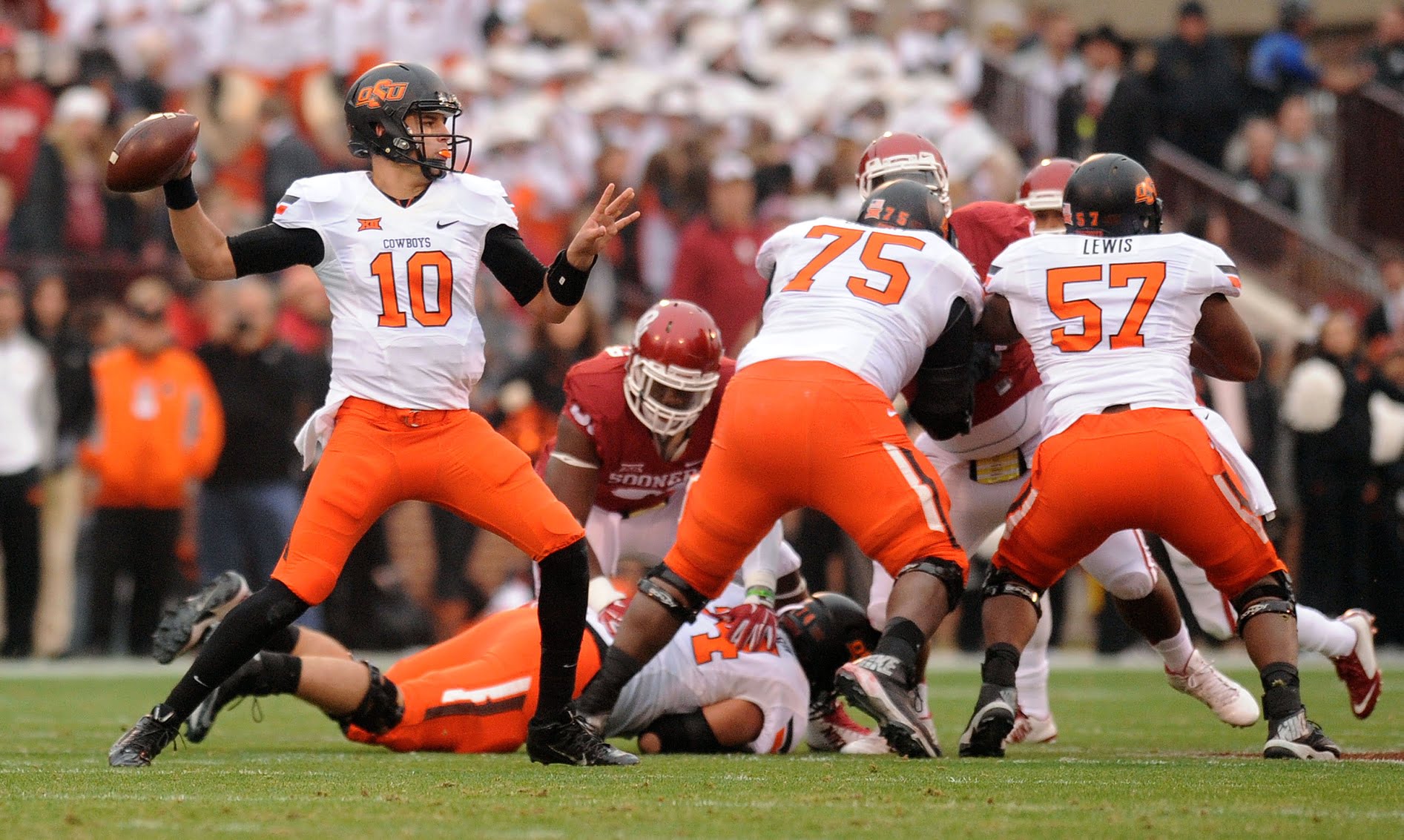 As a part of our dog-days slate in the absence of football, we at PFB will be taking you down memory lane and looking back at several of the biggest wins in Oklahoma State history.

The idea is to present a multi-part series where we go in-depth on each game or event recalling the most significant moments from memory and then framing them with perspective of what we now know about Oklahoma State football.

The first that came to my mind is an especially memorable game for all Oklahoma State fans, and one that I was able to enjoy in person. This is my recollection of Oklahoma State’s latest Bedlam victory in football, fueled by my memory and aided by what now must be my 109th total viewing on YouTube.

It was a foggy, cool afternoon in Norman. Personally, I was there as the guest of my father-in-law. He in his crimson and me in my orange. The interwebs tells me it was 45 degrees about the time we found our seats, roughly 2:30 p.m., but I can assure you that the wind whipping through the upper level of the southwest corner of Gaylord Family Oklahoma Memorial Stadium (pre-renovation) felt much cooler.

But the Cowboys were even colder than that, coming in on a five-game losing streak and were an abysmal 5-6 on the year. I hate to admit it, but when the offer was extended weeks earlier, I immediately began thinking of reasons to play nerve-wracked spectator from the safety of my living room. But two weeks prior, a strangely exhilarating loss in Waco strengthened my resolve to rub elbows with the crimson collective.

Being around obnoxious Sooner fans was never a problem and neither was, for that matter, the prospect of losing to Oklahoma. That’s how I grew up. My dad is a Sooner alum, as is my brother. Dad was never much for getting too excited about sports, much less becoming obnoxious, but a good chunk of my relationship with my brother during our formative years centered around more mutual hatred than respect when it came to our sports teams.

We are familiar with the big picture setup. At the time of kickoff, OSU was on the wrong end of an 83-18-7 record in the in-state series. Mike Gundy was 1-8. OSU needed the win to keep its program-best bowl streak alive under the mullet, and Gundy needed the win to replenish his then-depleted store of goodwill and collateral among higher-ups in Stillwater and even some fans.

Things had gotten, well, tense during that losing streak. Even Gundy’s media availabilities — which are now mostly jovial and, if nothing else, entertaining — ranged from delicate to awkward. His 2014 press conferences could be separated by the labels B.B. for before Bedlam and A.B. for after.

Despite the aforementioned skid the Pokes were riding, there was palpable buzz in Cowboy country. Mason Rudolph had finally been unleashed on the Bears of Baylor before heading into the previous week’s bye.

The Cowboys came up short in the Waco rain, but a spark was ignited during the debut of the eventual all-everything leader in program history whose embers were fanned by the ensuing rivalry game and a less-than-untouchable Sooner squad hamstrung by injury.

Still, the Cowboys were three-touchdown underdogs and faced the always daunting task of going to toe-to-toe with the Sooners in Norman. My mood — I think I can speak for most OSU fans — was less than confident with a slightly brighter-than-normal glimmer of hope.

The announcement was made: OSU won the coin toss and deferred. They would defend the north end. OU would receive.