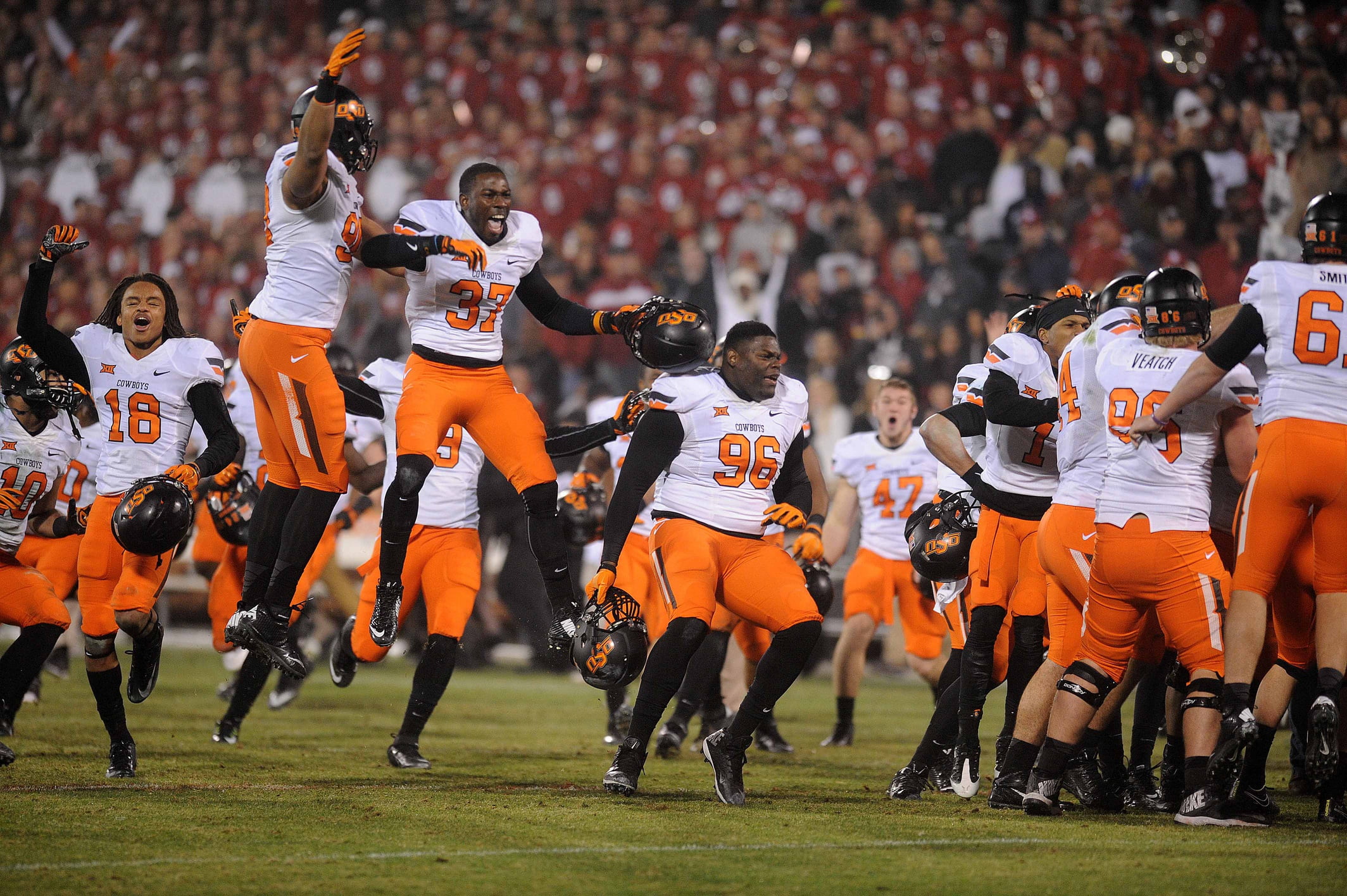 When we previously left off, the Sooners had scored their final points of the day on an Aaron Ripkowski 1-yard run. The score was 35-21 in favor of the home team, setting up one of the more drama-filled and exhilarating finishes many of us will ever witness.

Spoiler alert: Oklahoma State would finish the game on a 17-0 run. Tyreek Hill’s punt return is the score we all remember, but let’s first look at the several dominoes that had to fall into place for it to even be possible.

On the ensuing possession after OU’s last score, the Cowboys found themselves in fourth-and-long after a pretty egregious holding penalty was not called on Sooner DB Julian Wilson who hitched a ride on Brandon Sheperd’s rear collar through most of his route.

OSU was down two scores with less than seven minutes on the clock and Mike Gundy, still owner of all three timeouts, decided to punt. It was a decision that put in motion the sequence of Gundy out-coaching his Bedlam counterpart maybe for the only time ever.

Glenn Spencer’s defense held up its end of the bargain forcing another three-and-out. Gundy used his first TO and got the ball back with just over five minutes remaining. Just enough time for the Brandon Sheperd Show. Rudolph went to Shep for 14 yards on the first play and then right back to him for a tough grab, spin and scurry that totaled 43 yards and counted for 6 points.

Bob Stoops, though only up 7, was more than happy to try to run clock. Gundy called his bluff and put 10 in the box. Another three-and-out. The would-be game-tying drive was in play with four minutes left. But as if all Bedlams were somehow destined to end the same way, the next three plays left me and my orange compadres’ heads spinning.

That was it. Another Bedlam defeat snatched from the jaws of victory. It was cold. My face was numb and stuck in a stupid expression. The home student section was swaying, at least what was left of it.

We’ve given Gundy plenty of grief over the years about the way he manages the end of games and the way he coaches against OU, but his handling of OSU’s timeouts — and Big Game Bob’s complete lack of urgency — played into the Cowboys’ favor.

Stoops was more than happy to give the ball back to OSU with just over a minute remaining. A glimmer of hope. Then, before you could say “squinky” a flag was thrown on OSU for interfering with OU’s kicker, and my face made another, stupid expression. Insult, meet injury. But OSU caught a big-time break based on nomenclature, and what could have been a roughing the punter call was simply called running into the punter.

Then Bob gave the Cowboys an even bigger break when he decided to rekick to Tyreek Hill. Had OU declined the running-into-the-kicker penalty, OSU would have taken the ball at their own 15-yard line with 1:01 remaining and no timeouts.

The momentum seemed to shift every other play during those last eight or so minutes of regulation. And it all culminated in this one unforgettable moment.

Personally, this play might be the most polarizing and hardest to reconcile for me ever as a sports fan.

It’s hard to know how to celebrate this play. At the time it seemed like the single greatest thing I had ever witnessed. Shortly thereafter, it became an unfortunate reminder that you can learn little to nothing about a player (good or bad) based on what you see on TV.

Looking at the return as it relates to this game, it encapsulated what we love about sports.

The rest, as they say, is history. The Cowboys won the overtime battle thanks to another clutch kick from Ben Grogan, and a not-so-clutch kick by Michael Hunnicutt.

The Cowboys got the W, Gundy got a new hair cut, and I got to gloat a little bit over dinner with my in-laws and all was well in Cowboy land for the next year or so.