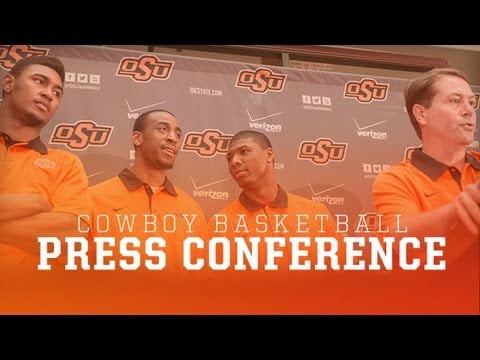 Marcus Smart did the unthinkable on Wednesday — he turned down $8 million in guaranteed money to return to Stillwater, Oklahoma for his second year of basketball under Travis Ford.

Here’s what he had to say on Wednesday at his press conference:

I love you guys and I’m a Cowboy at heart, so it looks like I’ll be coming back for my sophomore year.

I am aware of how much money I’m giving up. A 19 year old kid with that kind of money. It’s a lot of money.

I just followed my heart. This is where it’s at.

Here’s Nash and Markel too:

This is one of the hardest decisions of my life … I decided to come back for my junior year. (Nash[1. I have no idea what’s going on here.])

We decided it was time for me to…keep building on this legacy here. (Markel)

We need to get Gallagher back jumping. (Markel)

And Ford (who couldn’t stop smiling):

Finally, here’s a photo of the Union:

And a lasting shot: