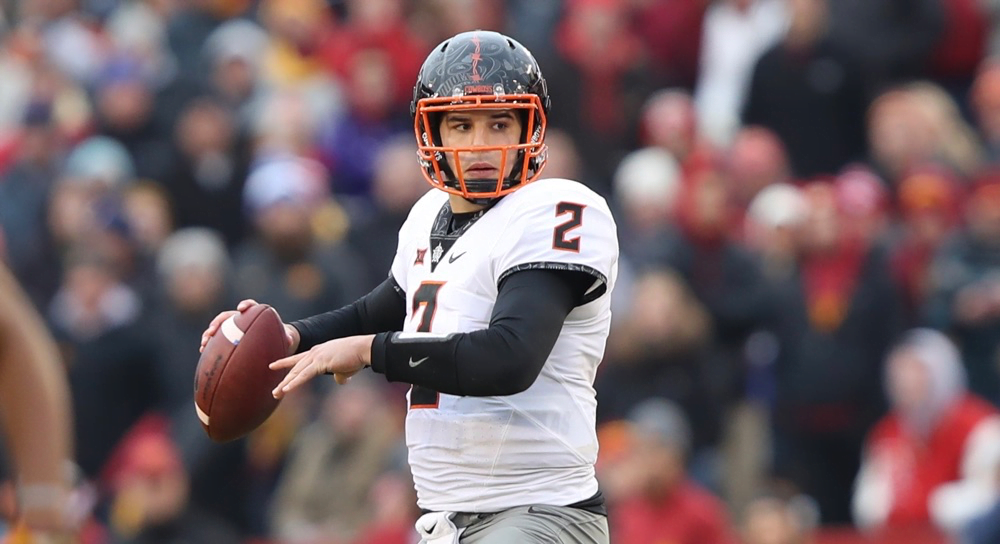 Oklahoma State senior quarterback Mason Rudolph has been tabbed as the winner of the 2017 Johnny Unitas Golden Arm Award, given to the nation’s top senior or fourth-year quarterback.

Rudolph was among the final five for the award and won it over OU’s Baker Mayfield, Ohio State’s J.T. Barrett, NC State’s Ryan Finley and Penn State’s Trace McSorley.

It’s official, @Rudolph2Mason is the 2017 #GoldenArm Award winner! Welcome to the QB club. ?

Rudolph is 31-9 as a starter at Oklahoma State entering the Cowboys’ yet-to-be-determined bowl game. He tops the OSU record book in passing yards with 13,267 throughout his career as well as touchdown tosses with 90.

“Mason represents our football program the right way,” said Mike Gundy. “He’s won a ton of games for us. He’s played with broken ribs, he’s played with a broken foot and he’s been tremendous for this school and tremendous for society. I had a conversation with his mom and dad and told them for everything that he’s done (on the field), as a parent, you should be more proud of what he’s done (in the community). He’s awesome.”

According to the award’s website, the winner’s qualifications not only take into account on-field success, but are also “judged on their character, citizenship, scholastic achievement, and leadership qualities,” which might explain why he’s the winner over presumed Heisman favorite and infamous crotch-grabber Baker Mayfield.

“Winning the Johnny Unitas Golden Arm Award is a meaningful honor for me because this is a reflection of how I was raised,” Rudolph said. “I was taught from a young age that there is more to life than football and I’m thankful to the committee for selecting me. I am humbled and thankful to everyone who helped me get to this point.”

Rudolph will receive the prestigious award at a ceremony to be held on Friday, Dec. 8 at the Embassy Suites Baltimore Inner Harbor & The Grand in downtown Baltimore. Former Baltimore Colts center Bill Curry will be in attendance to honor him.