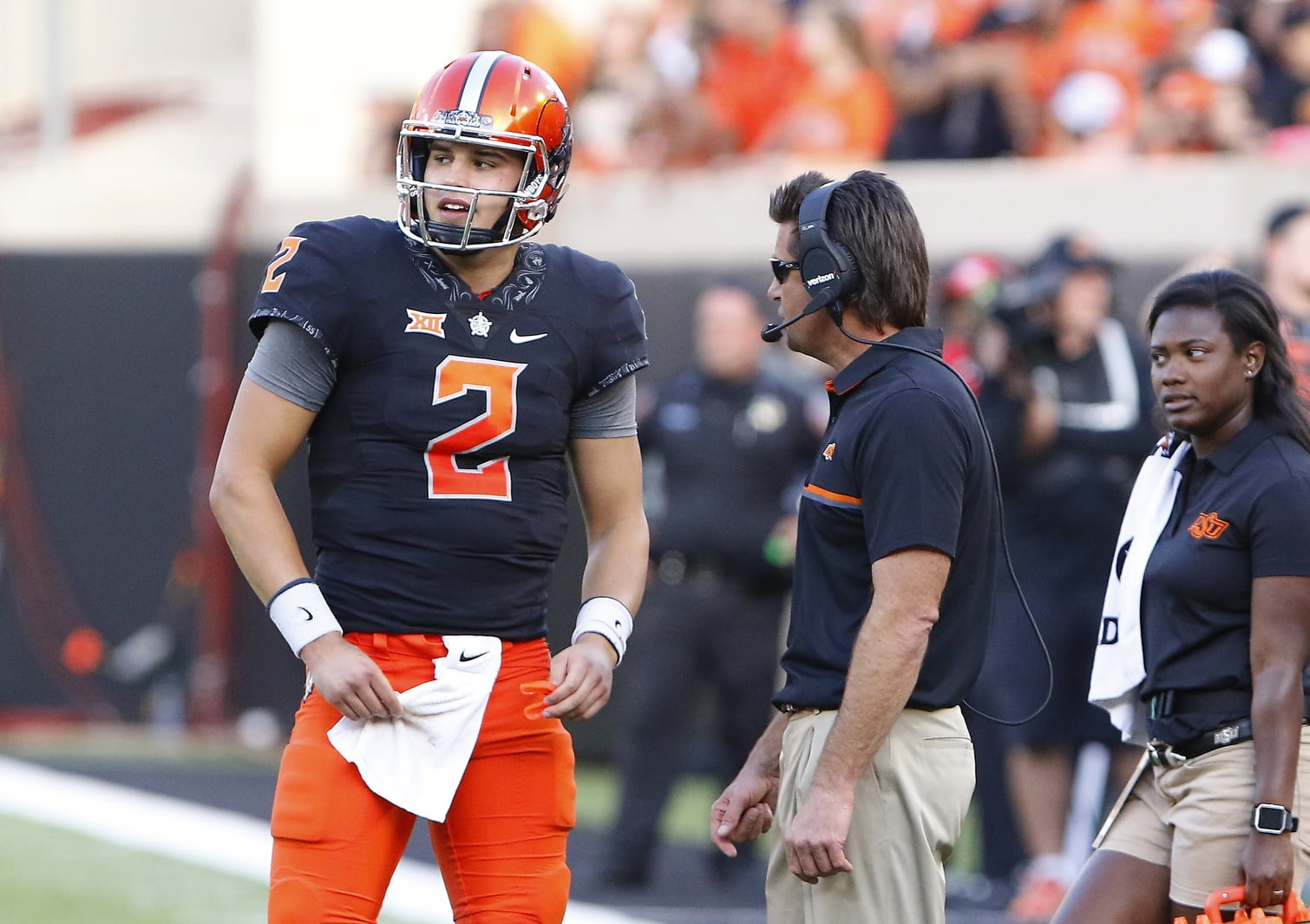 It was painfully obvious — and obviously painful — every time the Cowboys reached the red zone or came up to a third down-and-1 with Mason Rudolph at the helm a few years ago. The young franchise QB that shouldered the hopes of Oklahoma State’s return to relevance wasn’t trusted to throw a back shoulder fade or to dip his own shoulder over the line of scrimmage.

It was probably the right call, but that didn’t make it hurt any less each time Rudolph trotted toward the sideline, somewhat dejected. But he always high-fived his relief, J.W. Walsh, along the way.

That subject was broached earlier this month as Rudolph spoke at the Mayor’s Prayer Breakfast, an event in Rock Hill, South Carolina where OSU’s all-time passer attended high school.

“Obviously, I was not a big fan of Mike Gundy’s two-quarterback system,” Rudolph said through a smile, according to the Rock Hill Herald.

The 2015 Cowboys offense was very one-dimensional, which was not Rudolph’s fault. But there was plenty of finger pointing to go around, at least by fans.

The blame was placed on an offensive line coach that had left the program two years prior in Joe Wickline. The blame had been placed at the feet of the two OL coaches that had filled the job sense and, by many, at the feet of then-OC Mike Yurcich. The point remained that OSU was inept at running the football and at protecting its QB (see all of 2014 and the class-1 felony performed by Texas against Daxx Garman).

For most of that 2014 season Rudolph had waited his time on the sideline, even after Walsh joined him with a foot injury. He waited through a four-game losing streak before finally getting his shot on a rainy night in Waco when Gundy could keep that redshirt tucked in no longer.

The Cowboys came up short to Baylor, but even in the loss there were embers of excitement around the program and among its fanbase. Two weeks later, Rudolph would light the fire by leading OSU to its latest Bedlam win (with special thanks to the mononymous figures “Bob” and “Tyreek”).

When the Cowboys had a chance to set up a game-winning field goal in overtime in Norman, Rudolph solicited Gundy for a chance to win it with 7 instead of 3. Again, Gundy rebuffed and made the correct decision for the program.

The two-QB system the following season was a strange situation, even if it was necessitated. You have your franchise QB, a budding star, but then you have a team not adequately built to facilitate his abilities or showcase his talent.

Rudolph revealed that he didn’t have much of a relationship with Gundy until his junior year. A Cowboys assistant coach greased the wheels between the two, suggesting to Gundy that he make more of an effort to build a relationship with Rudolph, who had enjoyed a very tight bond with his high school coach. Rudolph said that after the assistant coach spoke to Gundy, Gundy sidled up to him the next day and said, “how’s it going?” in his country accent.

Rudolph pointed out that his relationship with the mulleted one improved over time (winning seems to cure everything), even recalling the scene at 2017’s Homecoming and Hoops when he and Gundy bared chests together for the sake of hype. 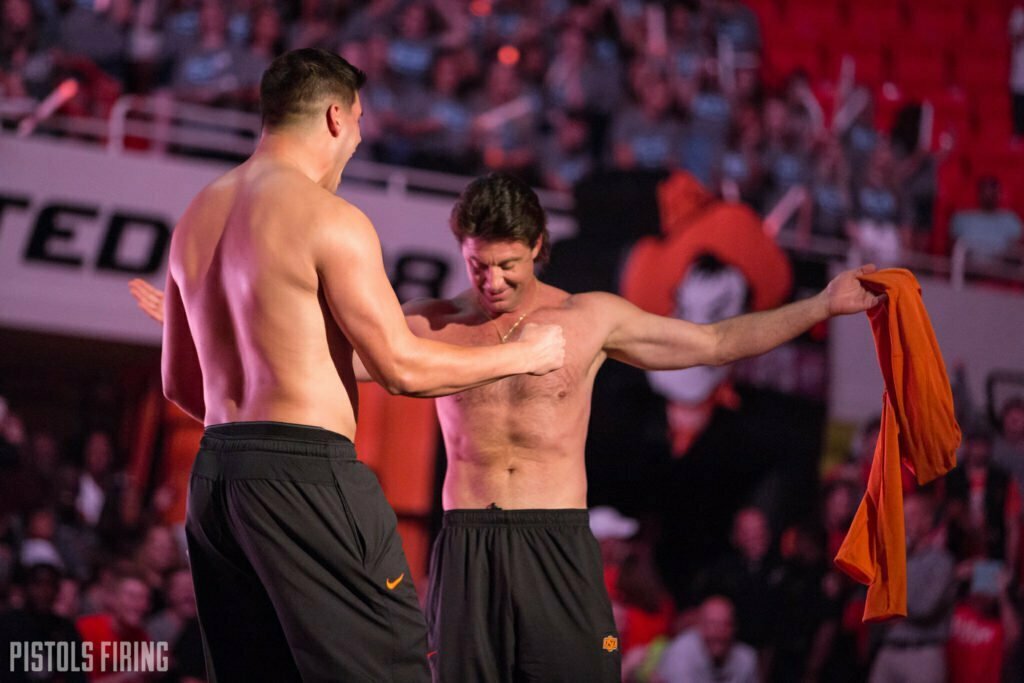 Rudolph grew into his role as the face of the program and OSU’s offense grew into the type that could go toe-to-toe with any in the country. Although, I’ve always wondered what Rudolph and his weapons could have accomplished had he spent four full years behind an at least competent O-line.

The Drama of the Draft

While a whole new crop of NFL hopefuls are counting the days until the NFL Draft, the current Pittsburgh Steeler vividly recalled the journey he took just a year ago, and all of the stress and the frustration that came along with it.

Rudolph, who was thought by many to be one of several quarterbacks to go in the first round, fell all the way to pick No. 76 in the third round. In any other year, maybe he goes in Round 1, but this crop of passers was being hailed as the best since that historic 1983 class that included Dan Marino, John Elway and Jim Kelly.

One by one, he watched Baker Mayfield, Sam Darnold, Josh Allen, Josh Rosen and finally Lamar Jackson get selected on Thursday. Rudolph would have to turn in for the evening undrafted. The family and friends who showed up for his big night would go home, the food would be put away and they would all come back and try again tomorrow.

“That was a blow,” he said. “I’ve tried to bottle that up and keep it flowing through these next few years.”

Now the former accomplished college QB is seemingly playing third fiddle in the Steel City behind a suddenly enlivened, but aging, Ben Roethlisberger and his one-year senior Josh Dobbs.

But Rudolph is taking it all in stride, biding his time and preparing, just like he did at OSU, waiting for his chance to take the reins and hopefully light the fire of another fanbase.