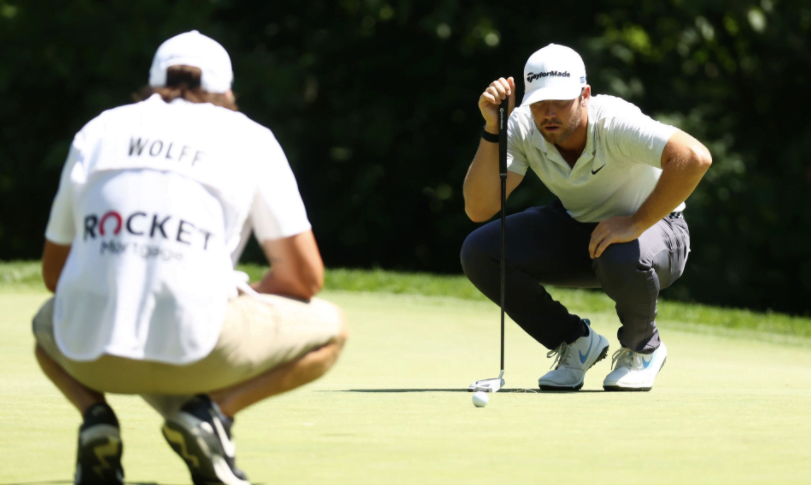 Former Oklahoma State star Matthew Wolff was the 54-hole leader in Detroit heading into Sunday at the Rocket Mortgage Classic before wrapping his weekend with a runner-up finish and succumbing to the phenomenon that is Bryson DeChambeau.

Wolff had a good-but-not-great Round 4 after a promising opening three days in which he lead the field by multiple strokes. After posting 69-64-64 in his first three rounds, he got in the clubhouse with a 1-under-par 71.

It was a perfect confluence of events that led to him ultimately getting passed by DeChambeau. DeChambeau posted his best round of the weekend on Sunday with a 7-under 65. The two sparred late in the afternoon but Wolff’s slow start — in which he posted four bogeys on his opening nine — led to him playing come-from-behind.

It almost was a winning strategy, too, against the odds. After a bumpy front nine he birdied four of his final seven and pushed DeChambeau to the end, but he left himself with little margin for error with his sluggish start. So when he had a chance to really apply the pressure, he couldn’t quite do it.

Matthew Wolff …
For an eagle …
To get within 1 … pic.twitter.com/Q3jYSpzmB8

Credit to DeChambeau, though. Wolff didn’t lose it as much as DeChambeau won it. He posted four birdies on his front nine to establish early momentum in his run-from-behind, and capped his day by posting three consecutive birdies on Nos. 16, 17 and 18.

Wolff had a couple of opportunities that passed him by on the greens — some makeable putts that either lipped out or didn’t quite lip in — but he said after his round that it was a valuable learning experience for him.

“I feel like those putts that I hit that didn’t go in, I hit good putts. They were a little bumpy. It just wasn’t meant to be. But it was something I’ll take account of, and as many times as I’m going to be in this position in my career, it’s something I’ll learn from. I’m not taking any negatives away from this week.”

Rickie Fowler had the best round Sunday of the killer OSU trio with a 5-under 67 — matching his best round of the week to jump 28 spots on the leaderboard up to T12. Hovland, meanwhile, had his most choppy round — a 1-under 71 — after a 54-hole score that had him inside the top-10 going into the final round.