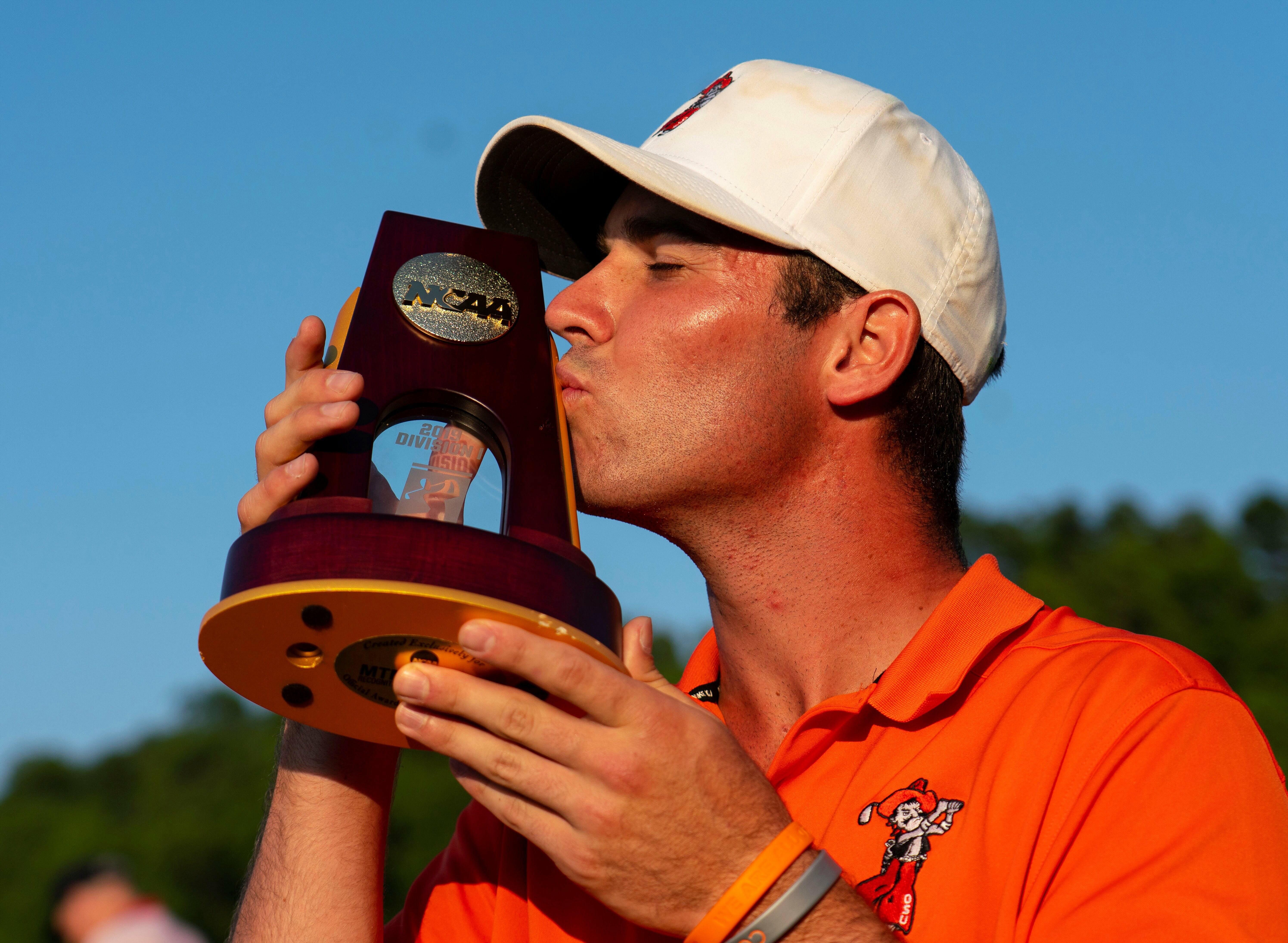 Matthew Wolff went out in 4-over 40 on Friday in Round 1 of the NCAA Championship. He played the next 63 holes in 14 under to win the 2019 individual title by five strokes over Steven Fisk of Georgia Southern.

It was the most dominant performance in recent NCAA history and may have just touched off the greatest single season by a Cowboy in the long, storied history of its prolific program. Wolff is the 10th individual NCAA champion for the Pokes and the first since Jonathan Moore did the deed at the Crosswater Club in Sunriver, Oregon in 2006.

Wolff set OSU’s single-season wins record (6), single-season scoring record (68.69) and won the biggest college event of the year at one of the toughest courses these golfers have ever played. Only five players finished under par at the end of the 72-hole event, and Wolff was doing laps around them all.

He beat the field average by a measly 26 strokes.

He was -10. Only five players broke par.

He shot one of just five rounds in the 60s on Monday en route to the title and played the back nine in 33 for the cruise home. While that may seem rote in the world of Wolff, I assure not everybody is constructed like Wolff is constructed.

“It was an unbelievable experience,” said Wolff. “Started off kind of slow, but kind of just was mentally tough and I told myself to kind of pick it up a little bit, give myself opportunities, and obviously, we have had a great year, so don’t let anything get to you. I have confidence in kind of just taking it shot by shot after that …”

“After the slow start, he was 4 over par after his first nine holes, and I just did the best I could to remind him, ‘Hey, it’s a 72-hole tournament and hopefully that’s a lesson that he learned,'” said head coach Alan Bratton. “We talked about that a lot, and hopefully that he remembers that for the rest of his life to always play that way. So certainly fun to have a front row seat for the show that he put on.”

I’ve been thinking about the fight or flight concept a lot in the past few weeks as it relates to golf. It started with Brooks Koepka at the PGA Championship, who had every opportunity to eject when things got rolling the wrong way on Sunday. I think one of the biggest misconceptions in golf is that great players don’t hit bad shots or have tough holes like everyone else. The reality is that great players are able to mentally overcome the bad shots they do hit and fight when others might flee.

Wolff is cut from that cloth, as he proved after that 40 on Friday on a course that, let’s just say should not be called “Blessings.” He made just five bogeys over the next 63 holes to 19 birdies, but it was the pars like the one he made on the par-3 13th hole when he got up and down from a dead spot in the bunker beyond the green that separate the pros from the ams. Wolff took a full swing at out of the sand and left it short of the hole when you couldn’t possibly leave it short. It was a 3 on the card but worth much more than that.

Also when you hit it as far as he does and wedge it like this, it might not be a fair fight. Wolff could be jammed into the Memorial later this week, and he’d have solid odds.

After back-to-back bogeys, @OSUCowboyGolf's Matthew Wolff bounces back at No. 10 🐦 pic.twitter.com/uU2VKnpy3n

So it’s not surprising that Matthew Wolff won the rare 72-hole college event (most are 54 holes). The more golf you play, the easier it is for talent to emerge. If every PGA Tour event was 1,000 holes instead of 72, the only players who would ever win are Brooks Koepka, Dustin Johnson and Rory McIlroy.

What is surprising is how easy Wolff made all of this look. After an All-American freshman season, the kid with the funky swing was playing PGA Tour events and became more famous than most players on the big boy circuit.

It’s not a stretch to say he’s the most famous collegiate golfer since that fellow who played at Stanford over 20 years ago, and yet it hasn’t rattled him. In fact, it’s seemingly done the opposite.

What Matt Wolff has done this year is insane… to play THAT well every week… when you’re the favorite and expected to play well is beyond impressive. What a run he (and OSU) is on

All the records have fallen. Statistically, nobody else can hold a candle to his 2018-19 season in Oklahoma State history. His 2018-19 campaign was nearly a shot better than Charles Howell’s 69.57 scoring average in 1999-2000. He also holds the career scoring average over Hunter Mahan. He beat the single-season wins record by two. The previous sophomore wins record was three, held by Peter Uihlein, Hunter Mahan, Scott Verplank and others. Wolff doubled it. Only Howell has more rounds in the 60s (42) than Wolff does (39), and it took him two more seasons to do it.

We could be here all night.

The point is this … there is an argument that the best golfer in OSU history just had the best season the school has ever seen. Plenty remains over the next two days, and only time will tell if this was lightning in a two-year bottle or if Wolff is going to be one of the best at the next level, too (he is).

“Walking with Matt was a treat, it always is, he does some pretty awesome things,” said Bratton. “He hit an 8-iron from 151 on number 3 which I thought was the best shot he hit all day, and on No. 12 he hit an 8-iron from 200 yards. So to have the ability to change speed like that was exciting. He worked the ball both ways and did a fantastic job of keeping his composure all week. … So certainly fun to have a front row seat for the show that he put on.”

So few superstar talents possess the pizzaz and ferocity Wolff possesses. That combination led him down a path few have tread in college golf history. It ended the only way it ever would. With him hitting pause by marking a 5-inch putt on the 72nd hole of the NCAA Championship — the last hole of his individual college career — and roaring one more time over what he’d just accomplished.