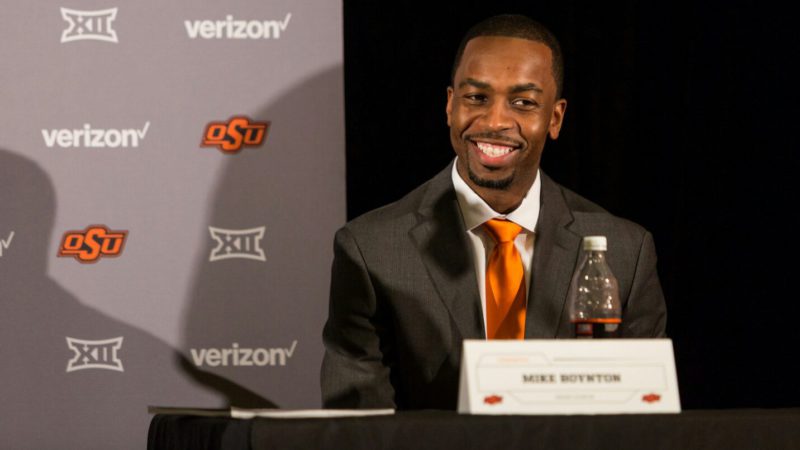 Earlier this week, OSU’s first-year head coach got some good news in the way of a pledge. Highly sought-after transfer Michael Weathers wants to be the Cowboys’ point guard of the future. Weathers, the 2016-17 Mid-American Conference Freshman of the Year, averaged 16.7 points, 4.8 assists and 4.2 rebounds as a freshman.

“We are ecstatic to add a player of Michael’s ability and character to the Cowboy basketball program,” head coach Mike Boynton said in a statement on Tuesday. “He embodies everything we want Oklahoma State basketball to be about. He comes from a tremendous family and has a passion for the game of basketball, but more importantly he has a desire to be the best player he can be. We look forward to having Michael join our team, and will be even happier to have him join us on the court in 2018.”

After the shock wore off from Boynton being named as the successor to departed coach and mentor Brad Underwood, most had questions. Can he coach? Can he really recruit?

This is a big win on one the latter front. Whether the recruiting acumen is Boynton’s or belongs to associate head coach Lamont Evans (or both) is really a moot point.

Seemingly, Boynton has spent more time in an airplane during his first month in office, than his own office. And it seems to be yielding results. He’s secured next year’s incoming point guard Zack Dawson and now has Weathers on board.

Boynton and staff reportedly reached out to Weathers after he announced that he was looking to play elsewhere. Last week, Weathers announced his plans to visit Stillwater on April 25 as well as scheduled visits at Nevada, Xavier and Miami. Apparently, Boynton was able to close the deal without the visit.

It also didn’t hurt that Weathers’ head coach at Miami (Ohio), John Cooper, is now a member of Boynton’s staff.

Weathers will have to sit out the 2017-18 season due to NCAA transfer rules but has three years of eligibility remaining.