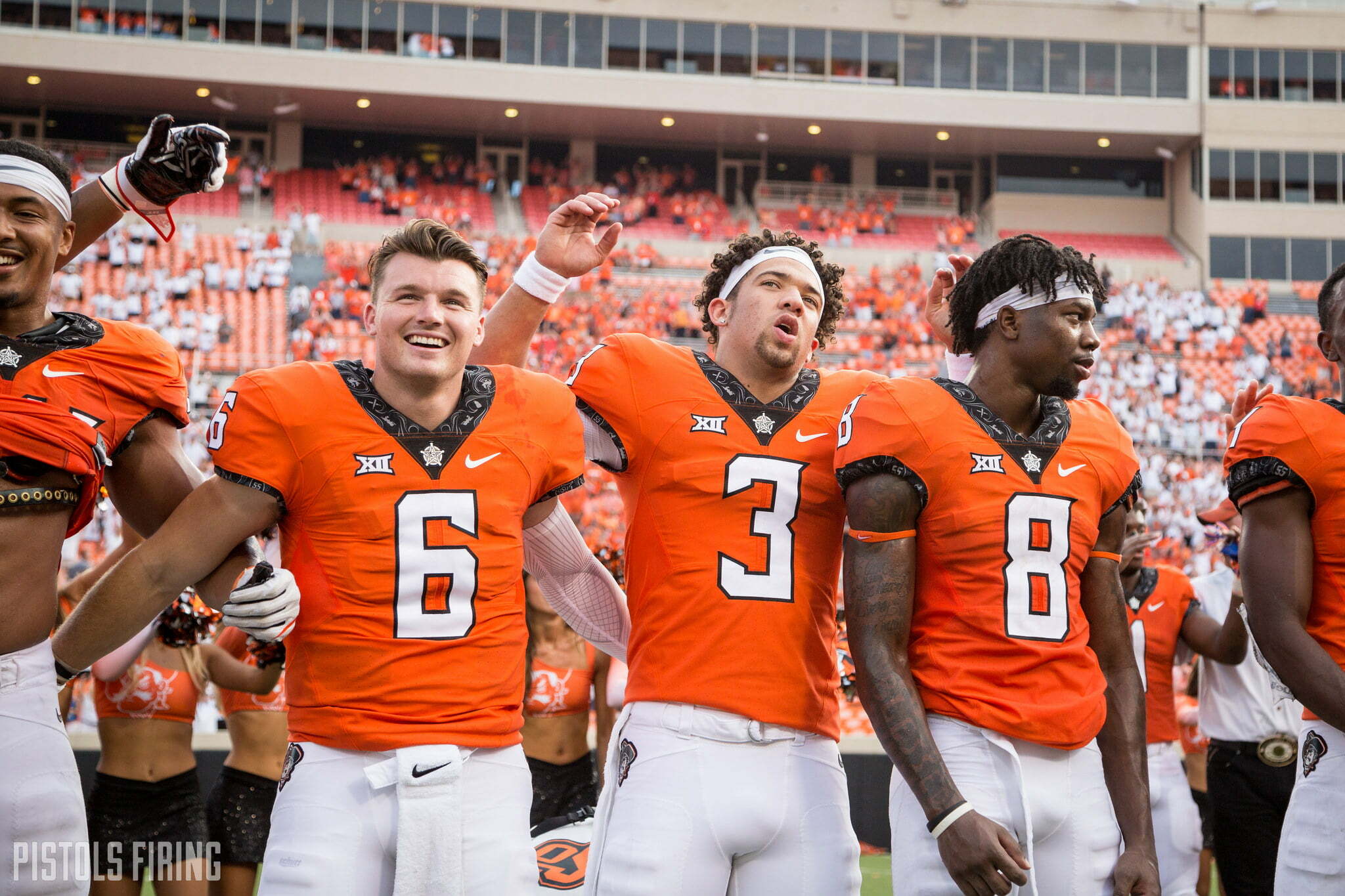 There are plenty of questions for Oklahoma State’s football team heading into this spring, but numero uno concerns who will be taking snaps in its backfield.

After a year-long wait by OSU’s fanbase for that QB substitution that never would come, we will finally see Spencer Sanders take the lead of Oklahoma State’s offense. Or will it be Dru Brown? Or Brendan Costello? Or will it be quarterback by committee? Mike Gundy had better hope not.

Sanders has shouldered heavy expectations since he arrived on campus last summer and is the assumed QB1, if everything works out. From all accounts, he’s the clubhouse leader and it appears that he’s not planning on wearing a headset on the sidelines come September.

But OSU also has Brown, who has also been in the system for a year and is an adequate thrower, runner and leader of the offense. And let’s not forget the four-star passer from Cali — outgoing offensive coordinator’s Mike Yurcich’s parting gift — Brendan Costello, who enrolled early and will take part in spring practices. That’s something Sanders did not do in 2018, and which may have contributed to his not seeing the field as a true freshman.

That amount of depth, talent and upside would be the envy of most head coaches across the country. But what if someone can’t outright win the job?

The man holding the clipboard in that quarterbacks room will be recently hired OC Sean Gleeson who brings an imaginative playbook and a history of not only playing multiple quarterbacks, but fielding them at the same time.

Those hijinks remind me of a daydream I had at one point during the fall of 2015 which involved Mason Rudolph walking, dejected, back to the sideline while J.W. Walsh trotted on-field at a puzzling juncture. Only Rudolph stopped on the turf, visibly upset, to complain just as the ball was snapped. It was a trick play and five seconds later Rudolph strolled into the end zone after catching the game-winning touchdown.

I never got my wish. I digress.

While two- or three-quarterback trick plays sound like the stuff of legend, having a clear-cut QB1 has proven to be crucial to Oklahoma State’s success, and that will likely be the case in 2019 and moving forward.

You can point out aberrations and exceptions, but across college football — and especially in the Big 12 — stability behind center normally translates to success. Let’s look at what it’s meant for Gundy-coached teams historically.

During his 14 years at the helm, Gundy has seen nine seasons with an unquestioned starter behind center from start to finish (roughly 64 percent of his tenure) and his legacy has been livened by those passers.

Here’s a look at those years and the corresponding records.

Of those nine years, seven were captained by three of the best QBs to ever lace ’em up at Oklahoma State — Brandon Weeden, Mason Rudolph and Zac Robinson. You can rank them however you see fit, but the preceding order was the correct one. Most coaches would kill for such a run of QBs.

Before my fact-checkers interject, we are including 2009 and 2015 even though Alex Cate actually started a football game (?!) for an injured Robinson and J.W. Walsh — who  actually served a huge role in the offense — started in place of an injured Rudolph during the 2015 rendition of Bedlam. That’s the last we’ll speak of that night, I promise.

Then there were the other years, mostly in between franchise QBs, in which multiple passers got the start — sometimes due to injury and mostly due to inconsistency.

You could cherry pick that 2013 Cowboy team — which should have won a conference title. But remember that it fielded probably the best defense in school history, and at least the best during Gundy’s tenure.

As it relates to the near future, do we think that Year 2 under Jim Knowles, with a rebuilding D-line, will provide a defense able to shoulder that type of load? ?

Also, that 2013 team lived in a world that included a watered-down Oklahoma team (that OSU still lost to) in one of just five years during Gundy’s tenure that big brother didn’t win the league. Remove that year and multi-quarterback years for OSU have finished just a hair above .500 overall (26-24) and have proven to be mediocre overall.

Following a disappointing 7-6 season, OSU needs a gamer to emerge at QB, and that gamer probably needs to be Spencer Sanders. Brown is intriguing and Costello has all the upside, but Sanders is the highest-rated QB that Gundy has ever signed.

Gundy is OSU’s winningest coach ever, and the thought of his seat even feeling warm seems silly. But college football suffers from a recency bias and if he strings together back-to-back finishes in the bottom of the Big 12, that mullet all of the sudden isn’t so marketable and those antics aren’t quite so forgivable.

If a full year invested in the former Mr. Texas Football can’t translate into a Big 12 starter — after a few months invested couldn’t beat out a polarizing walk-on — then what does that say about Oklahoma State football and its ability to keep up in the Big 12 arms race?