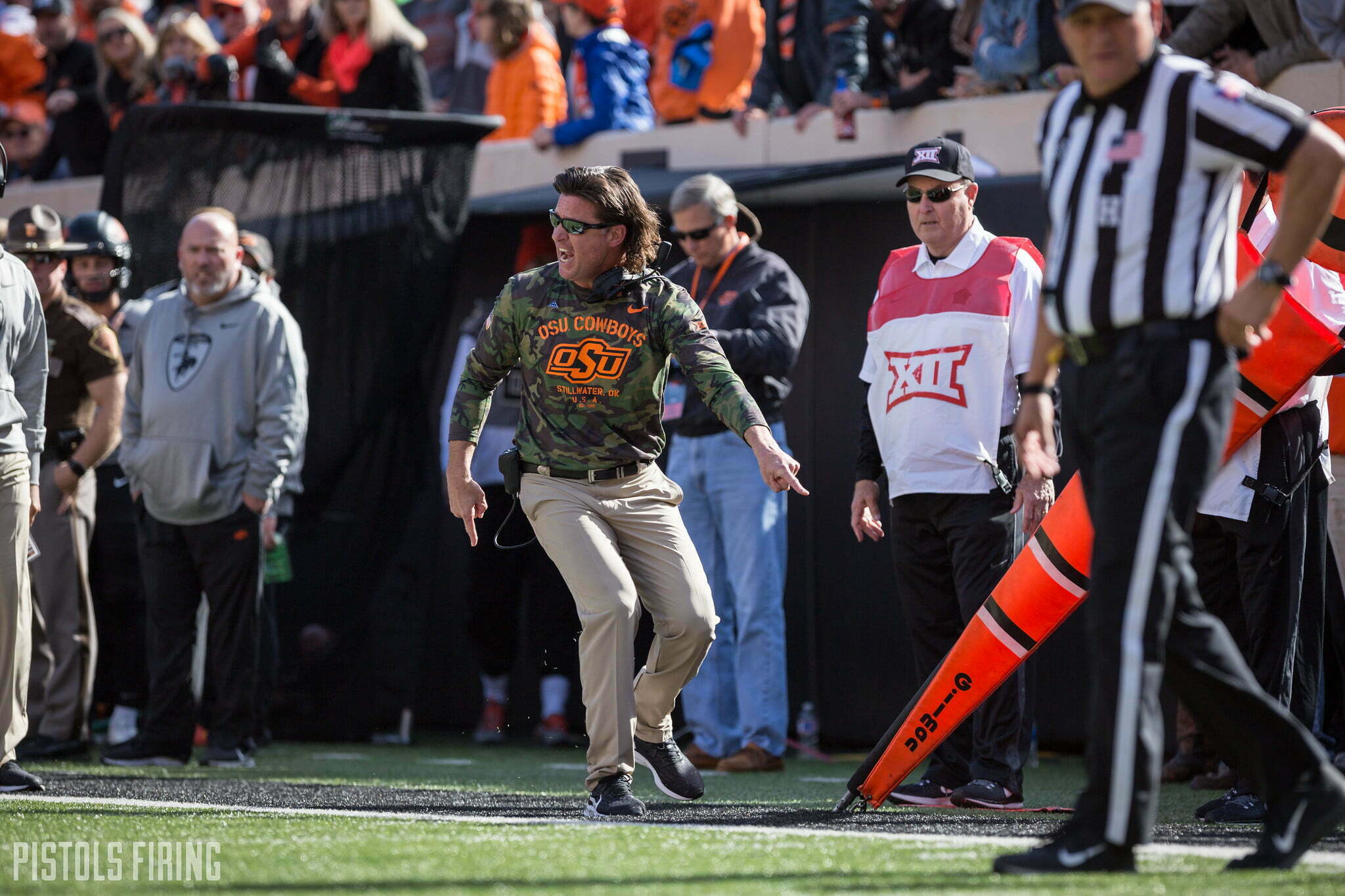 If you came hunting for some Mike Gundy slander like a man in his boots with some rattlers in northern Oklahoma, you came to the wrong place.

Mike Gundy’s OU problem is obvious. He’s 2-13. They — one of the five winningest programs in college football history — are winning at a clip that is (far) better than they’ve won at historically. More simply: OU is a top-five program of all-time, and in the last 15 years they’ve been better than that historical average (by a wide margin).

That this intersects with the golden age of Oklahoma State football is the most unfortunate reality for everyone included, Gundy most of all.

Here’s the thing we all need to accept: OSU is, for the duration of Gundy’s time in Stillwater, not going to recruit significantly better than it is currently recruiting. Those Richetti Jones-Dez Bryant-Brandon Pettigrew days are over. They’re never coming back.

If you say running a college football program is three-fold (and I do), those three silos would be as follows.

Being good at recruiting is largely a function of time and energy. Being a good in-game coach is learned over time for the most part. And being a good program manager is a level of skill that many (most?) Power 5 coaches never reach (go read a Texas blog).

This, to me, is the greater risk in looking into the future than grabbing somebody who’s going to bail for the first top-10 job he can find. That’s a risk, sure, but it’s not the biggest risk. The biggest risk is ejecting on Mike Gundy and getting Travis Ford.

Gundy only has X number of years left to coach. He’s only going to win X-X+1 or X-X+2 more Bedlams. It is what it is. So the absolute meltdown “pry my fingers off the keyboard” mode of wanting him to recruit MOAR STARS is a fool’s errand. It’s not going to happen. He doesn’t want it to happen. Recruiting improvement doesn’t get better with age. You normally either maintain it or it gets worse (See: Stoops, Bob).

But it’s also not necessarily a black mark on his resume. Because the thing you pay $5.1 million annually for is not a top-22 or top-18 recruiting class. You could pay $1.5 million for that (and OSU does in hoops). You pay $5.1 million annually because you have somebody who’s cracked the culture code and built one of the highest floors in the country. OSU might never win 12 games again, but they’re not very often going to win just six either. It’s repeatable and comfortable. There is so little risk.

I’ve sort of just accepted it, I guess. Kyle Boone is going to write about how OSU can get around their recruiting problem later today or next week, but there are certainly ways to do it. Those ways almost assuredly do not include losing QB1 and WR1 in the weeks leading up to Bedlam. But they exist.

Gundy has been wily in the past few Bedlams. They let it go against Baker in 2017. They went for the throat in Norman last year. This wasn’t the “might still be wearing his turtle shell after that four-year stint at Maryland” Gundy of old in Bedlams.

This year? What do you want? Do you want OSU to run the Annexation of Puerto Rico with Dru and LD? Do you want quadruple and quintuple reverses on every play? Onside kicks at every turn? OSU was outclassed this year by a wide margin. This is QB2 life at the end of the season.

And dang it do I wish Gundy would reignite in himself a recruiting fire once his kids graduate high school and turn OSU into Clemson Lite, where they’re loading up with top-17 and top-23 classes and raising the ceiling of the infrastructure every single year? Hell yes I wish this. The frustrating part is that it could happen, too. It could! It’s time plus energy plus desire. As somebody said in The Chamber last night, OSU was pulling Richetti Joneses when it was half the program it is now.

But it won’t, and we shouldn’t expect it to.

And if that’s true, then I hope in five or six years or whatever OSU starts talking about a legit succession plan. Somebody to take over the reins when Gundy doesn’t want them anymore. Somebody who wants to recruit the doors off the place but also somebody who understands in an intricate way the things Gundy has built and how they work. I don’t know who this person is, but I know that Ohio State and Oklahoma have made the transition beautifully, and I think OSU could do the same.

Mike Gundy won’t have many more 11- or 12-win seasons. Won’t beat OU much more. Might never win another conference crown. These are realities. Maybe one of each here or there, but there is no encouraging trajectory at a high level. As a human and a dad, I respect how he spends his time. As someone who covers this program and still wears orange, it’s tough to internalize that Gundy is best at what it’s hardest to be best at and doesn’t seem to care about the rest.

I don’t know where that leaves us. OSU has climbed the mountain and mostly stayed on a lower ledge than those Tier 1 programs for a decade. That’s why there’s nothing to do about the Mike Gundy problem. You going to get rid of Mike Gundy because he can’t do what nobody else can do either (beat OU)? Come on. That’s nonsense, and everybody knows it.

So after another Bedlam pounding, OSU looks into a future with a high floor and a low ceiling, pending another MLB pitcher from the state of Oklahoma taking his QB talents to Stillwater. It’s not the worst way to spend your fandom, but I’m not sure it’s really the best either.