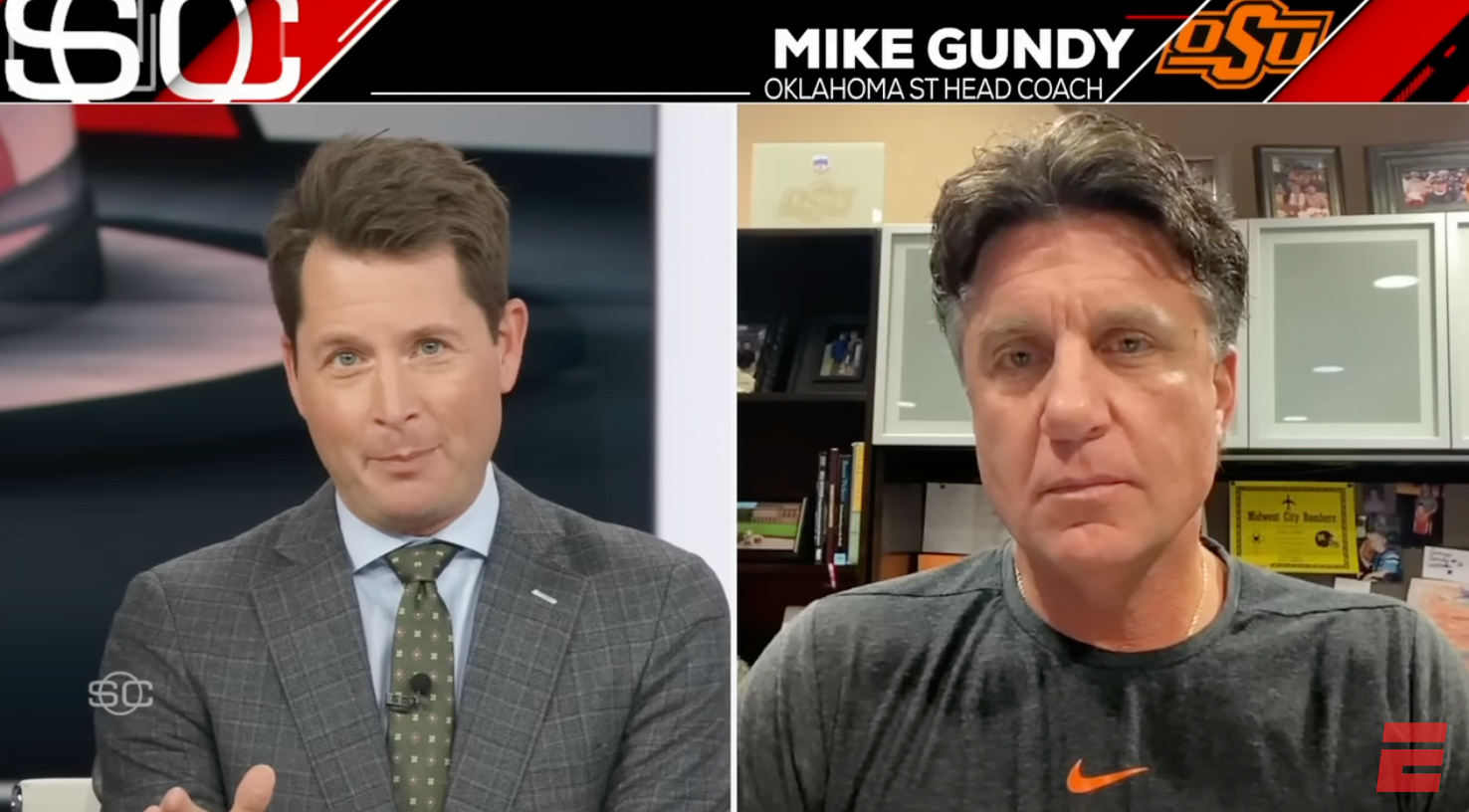 Mike Gundy joined SportsCenter on Tuesday to talk with Matt Barrie about his brief interest in joining the NFL, his team’s 5-0 start, Demarco Jones’ smart fair-catch wave on an onside kick, the state of the Big 12 and much more.

Here are the highlights of his appearance. (Full video linked at the bottom.)

• On why he stuck with college in 2012 after interviewing for the Bucs jobs, which he revealed earlier in the week: “I had really good interviews with the Bucs. They never actually offered me the job. I didn’t get to that point. I thought it was close. That’s neither here nor there. In the end, I feel committed to Oklahoma State. I’ve been here forever. It’s a part of me. From that standpoint, I love the people here. This is who I am. … I get a kick out of seeing former players come back. I’ve started recruiting my players’ kids now.”

• What he likes about this team: “These guys play hard. They’ve been committed to each other. Good team chemistry. There’s areas we are young. We’ve had some young guys step up, they’re making mistakes, but they’re playing hard, they’re buying in and competing hard. It’s a fun group to coach.”

• On the Demarco Jones fair catch when Texas Tech tried an onside kick: “Those are things that are coached in preseason and in August. We have a list of special teams thoughts that could potentially happen. We’re fortunate with Demarco. He’s a very savvy, intelligent player. Those guys are told in that situation to show fair catch.”

• On Spencer Sanders: “He’s very competitive, very tough. He’s learned to control his emotions. He’s mastered our offense. The offense is simple for everyone on the field except for quarterback. It takes a year and a half, two years, but once they figure it out, they become really good players.”

• Gundy on the Big 12’s health: “It’s very healthy. I think we now have the most aggressive, innovative commissioner in all of college football. He’s a deal-maker. He understands, he listens, highly intelligent. We’re bringing in four teams that have been tremendously successful over the years. They’re bringing in good television markets, winning programs, good coaches. It’s going to make this league stronger than ever.”

• On TCU: “TCU is a really really good team. This will be a good challenge for us. They’re playing really well.”