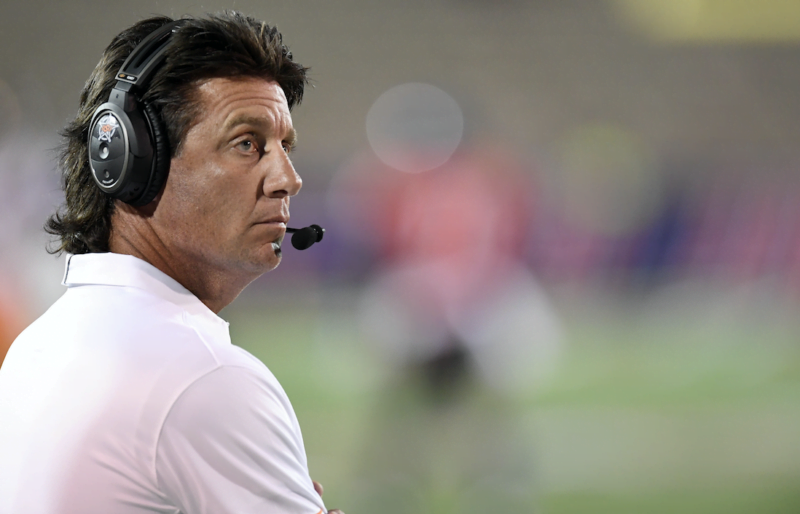 The job of an offensive coordinator at a Division I football team is fairly simple from an outsider’s perspective: Score more points than your opponent and don’t get too stale doing it.

Of course, there’s an Xs and Os element in that mix. And film study. And recruitment. But whether its an insider’s or outsider’s perspective, so far this season, OSU play-caller Mike Yurcich has been lights out in his role with the Cowboys. Mike Gundy heaped praise on his OC when given the opportunity following Saturday’s offensive explosion against Pitt.

“Mike is a task master,” said Gundy. “He very seldom gets his head and eyes off track for what he’s doing. I brought him here to hide him for a few years and it ended up being a good decision. I don’t know that I’ll be able to hide him much longer. He’s pretty dang good at what he does.”

Over the years Gundy has developed a reputation of bringing in offensive coordinators, grooming them, and watching them leave for other jobs. Dana Holgorsen left OSU to take the head coaching job at West Virginia, and Todd Monken did the same with Southern Miss. They were stellar coaches with stellar play-calling reputations. And Gundy says Yurcich can stand neck-and-neck with all of them.

“Mike is as good as anyone I’ve ever had. Mike is really good. I know a lot of people might debate that. I have no reason to tell you anything other than he’s really good. He deserves everything he gets, he’s a hard worker, he’s loyal. Dealing with me on offense is not fun, and I’m wrong a lot and he just says ‘yes sir’ and goes down the road and then does what he wants to do a little later. But he’s a smart guy and he’s a good coach.”

There is perhaps no coach who values continuity more than Mike Gundy in the country, but he’s smart enough to know that his young offensive coordinator will be tough to hang on to after this season—especially if the team continues its record-breaking pace behind Heisman candidate Mason Rudolph.

Said Gundy: “I can’t say he’s not a good candidate [to leave for a head coaching job] somewhere.”

Despite being quarterbacked by Rudolph in just 8.5 of a possible 12 quarters due to blowouts this season, OSU’s offense is at the tops nationally in points per game and total offensive production. It’s no fluke that the man who has his fingerprints behind these numbers could find himself at the helm of a football program sooner rather than later.