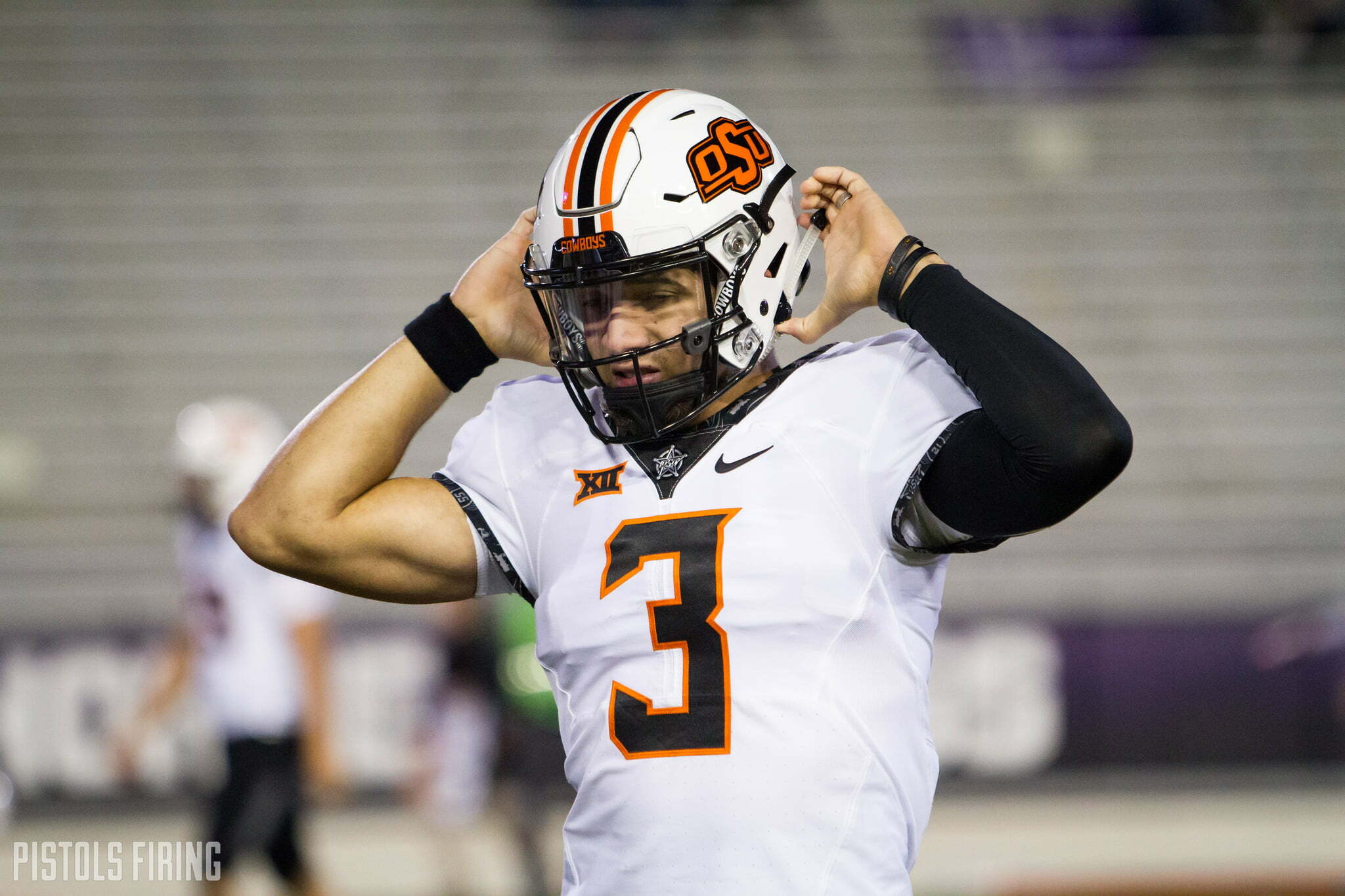 Remember that one and file it away when Spencer Sanders goes 14 for 26 for 218 yards and 2 INT against Iowa State in Ames as OSU gets throttled and Gundy trots out the, Well in my experience college QBs have to play 15 games before they get comfortable narrative.

In the quote above Gundy was talking about penalties and benching players and many things other than QB play, but boy, that’s a retrospective line right now, isn’t it? All season in 2018 Gundy trotted out a lame-duck QB who he banked on getting better as the year wore on. We were told after the first game and the fourth game and the sixth game, “No really we promise he’s good.”

Corndog improved as the season went on and played some of his best football in the biggest games at the end of the 2018 season. His pre-bye and post-bye splits tell you everything you need to know.

He led OSU to two (and nearly three) Ws over top 10 teams after the bye week, found his legs in the run game and was generally terrific the back half of the season (I’m purposefully ignoring the TCU game). Corndog, it became clear, was not the problem in one of the most bizarre years of the Gundy era.

The problem now is that Oklahoma State is going into 2019 — what should be a year in which it theoretically contends for the conference crown following the post-Rudolph gap year — with one hand on the reset button. All of its QB experience is gone, and its two top RBs coming into 2018 probably are, too. OSU couldn’t help the second part of that equation, but it certainly could have affected the first.

This — like with most things in sports and life — goes back to what your goals are. Are your goals to win as many games as possible in 2018? Or are they to maybe sacrifice a game or two (or more?) for the sake of getting your QB1 of the future the experience he needs to be ready to rock for conference play in 2019.

It’s not an easy decision, and you don’t often get to have it both ways, although I’m a believer in Sanders to the point that I think you might actually have gotten to have it both ways. Regardless, it’s tough to look the Justin Phillips’ and Cole Walterscheids of the world in the eye during their senior years and know you’re probably not putting the very best 11 guys you have out there on offense.

The flip side of this is that just as I argued against caring about what happens with Sanders four years from now regarding a redshirt, it’s fair to take the same approach with what happens one year from now. Who cares about that, we need to win now.

But now you have to pay off the debt on those purchases, and you’re starting in a hole in 2019 that could have been avoided. Gundy talked a few weeks ago about how one of his sons said after Bedlam that Corn would be pretty great if he was coming back in 2019. Gundy said this as if it was a great thing, maybe not realizing that it said more about the state of OSU going into next season than it did about Corn.

Is playing Sanders for five or seven or nine games in 2018 the difference between playing for the Big 12 title — that’s the annual goal, right? — or not in 2019? I have no idea. But I think there’s a world in which that could be true (a world that Gundy exists in, more specifically), and that’s what makes a decision like the one Gundy had so difficult to sort through.

The weird part about all of this? I’m not sure I can hold any of this against Gundy. Other than the Texas game, there wasn’t really a natural entry point for him to stick the S.S. Three behind center. Once the redshirt was safe, OSU was rolling. Were you going to bench Corn after Texas? No. Make Sanders’ first start against OU? No. Bench Corn after OU or West Virginia? No. And now we’re here. Now it’s over.

There’s also the reality that you may have been sacrificing a bowl game — and all the practices that go with it — for a few reps for Sanders. That’s probably not the greatest trade-off. Although you wouldn’t have if you’d played him against TCU, but you couldn’t do that following Corn’s heroics against West Virginia.

Ultimately I think Gundy probably made the right decision. I think we overvalue playing time, and if Sanders is as good as we think he is then a handful of games at the end of 2018 isn’t going to make that much meaningful difference in 2019. Plus, the up-and-down nature of the year made it really tough to know when to make the flip. It was much easier in 2014. If a move to No. 3 was going to be made, it should have come really early on in the year.

Gundy stuck with Corn in the face of criticism and a drumbeat of opposition, too. When Robert Allen even hints at a change, you know that beat is thunderous. I respect the choice and understand why he made it. That doesn’t mean there won’t be some reconciliation come Corwallis on August 30, 2019.

Short term vs. long term. It’s a no-win situation, especially when you go 6-6 and play Houston in the Lockheed Martin Armed Forces Bowl. If you rolled No. 3 out there, maybe the team doesn’t believe you’re playing to win the games. If you stick with No. 14 maybe your fan base doesn’t feel you have the best interests of the future of the program at heart. Maybe they feel that you care more about winning nine games than winning a conference title.

The reality here is that we’ll never know how this would have played out differently in an alternate universe. We’ll never know if OSU would have started 10-0 the year after Sanders got his feet wet like they did with Rudolph in 2015. So we can talk about it forever (and you can bet we will) but nothing changes the reality that OSU just went 6-6 in 2018 and is losing one of the primary pieces that helped them do so.