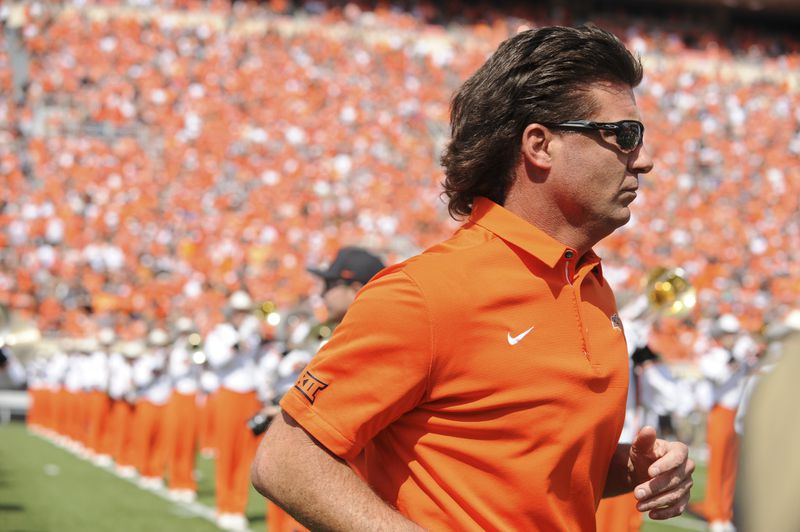 Mike Gundy flirted with the possibility of leaving his alma mater to take Tennessee’s head coaching vacancy in 2017 and wound up getting a handsome raise out of the deal.

Not only was it not the first time Gundy used good, old-fashioned leverage to squeeze money out of his employer, it was ironically not the first time he used Tennessee to do it, either. In his wide-ranging ESPN interview this week in which he (correctly) claimed OSU would have smacked LSU for the natty in 2011, Gundy said Tennessee has offered him the job not once, not twice ….

“I’ve had that (Tennessee) job offered three different times,” said Gundy. “It’s ironic that it’s always been Tennessee. I guess it gets to a point where you say, ‘Is it time for me to make a change? I’m 50-something years old. Is it time for me to go do things differently?’ Sometimes in your life, you think that way.

“Tennessee put together an unbelievable package, and it’s hard to tell somebody no when that happens. But I made the right decision.”

As the great Brett McMurphy reported in 2012, Gundy also got a new deal when the Vols came calling back after the 2008 season. The other instance came in 2012 after the program fired Derek Dooley.

The last time Tennessee called, in 2017, it felt like a real possibility. So much so, in fact, that OSU offered him a one-time $625,000 contract bonus and a new five-year rollover contract that sets him up with annual escalators and what amounts to a lifetime contract if he wants it. And despite the flirtations, Gundy says that he’s happy with his decision to have not left.

“This is who I am,” he told ESPN. “This is what I am. This is where I belong. This is me. There’s no reason for me to go anywhere else.”