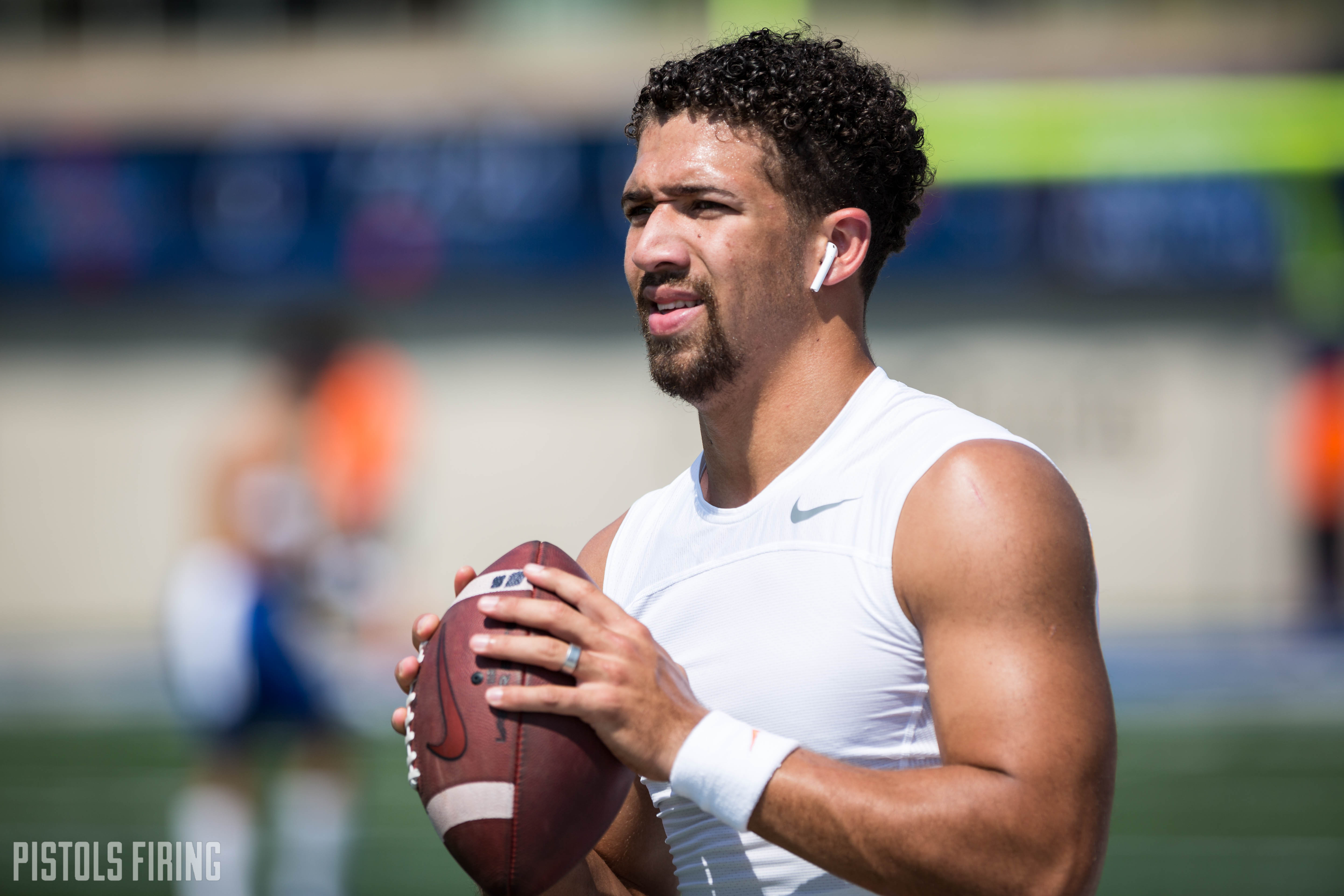 Early in the second quarter of Oklahoma State’s 40-21 win at Tulsa, Spencer Sanders was visibly frustrated. He had just completed a pass to Braydon Johnson that picked up 3 yards. Unfortunately, it was third-and-5.

The Cowboys, who had started out hot, running off to a 17-0 lead, were now up just 20-14 (and soon to be down 21-20). Sanders and the Pokes offense had mustered just 3 points in their last four drives starting with the first interception of Sanders’ young career. From the outside, things were looking a bit hairy.

The freshman phenom had mostly had his way with the defenses of Oregon State and McNeese. Any true test surely wouldn’t arrive until a week later in Austin. But Tulsa’s defense seemed one step ahead of OSU and, what’s more, the touted QB looked rattled for the first time.

“I was frustrated with my play,” Sanders said after the game. “I felt I played very poorly. My team really helped pick me up, but I missed throws that I usually hit. I have to get it right for next weekend.”

“He got flustered in the second quarter a little bit, and I had to calm him down,” said Mike Gundy. “Very competitive. Wanted to do a couple things different, and we really couldn’t do it based on what they were doing. We got him calmed down, and then he was good.”

Through his first two games, Sanders racked up 453 yards in essentially six quarters while boasting 74 percent completion rate and throwing six TDs. His passer rating was 211.6. Through his first two quarters against Tulsa, he had just 43 passing yards, was 7-of-14 on attempts, and had thrown an interception and was credited with a fumble. His passer rating was 61.5.

Sanders looked off on (and was forcing) deep balls and it appeared he was getting away from what had given him success in Weeks 1 and 2 — his legs and the intermediate passing game.

“Those things will help him as we go along,” Gundy continued. “Won’t be the last time. He wants to win. He wants to be good, so he’ll get frustrated. But he calmed down really well. Didn’t lose his thought process, in my opinion. He’ll get better as we go along.”

Based on what was obviously a close race with Dru Brown all the way through fall camp — and the quick trigger we’ve seen from Gundy in QB swaps in the past — it made you wonder if we’d see Brown warming up the third quarter.

When asked if he was tempted to give Brown a go, Gundy was dismissive of the notion, doubling down on Sanders’ development.

“(Sanders is) frustrated with success, not frustrated in a negative way,” said Gundy. “So, you let him go, put him back out there. The next series is when he took off against the house blitz and he scored, so he’s fine.”

Spencer did seem fine in the third quarter, going 4-of-5, connecting with Tylan Wallace for the third-longest passing play in OSU history and taking off for his own 27-yard TD run. It was that third quarter bounceback, along with the defense’s second half shutout, that allowed OSU to retake control of the game.

After we watched Gundy stick with Taylor Cornelius through thick and thin for 13 games last year — all the while with a pair of viable options in Sanders and Brown chilling on the bench — I just hoped we’d see that type of loyalty afforded his would-be QB of the future while he felt things out. So far, so good.

Sanders, too, seems confident that this is just another part of the process and an opportunity for growth.

“I’m going to do what I can to fix it, help this team and get it right,” said Sanders “I’m more than happy with the win. We can live it up tonight, but tomorrow I have to get better and I’ve got to do better.”

There are going to be growing pains for any freshman quarterback, but this is the capital you invest in someone you think can be great. Fortunately, this time his defense and his playmakers came to the rescue and the Cowboys are 3-0 heading into Big 12 play. But I have a feeling that sooner than later, that Spencer will return the favor.