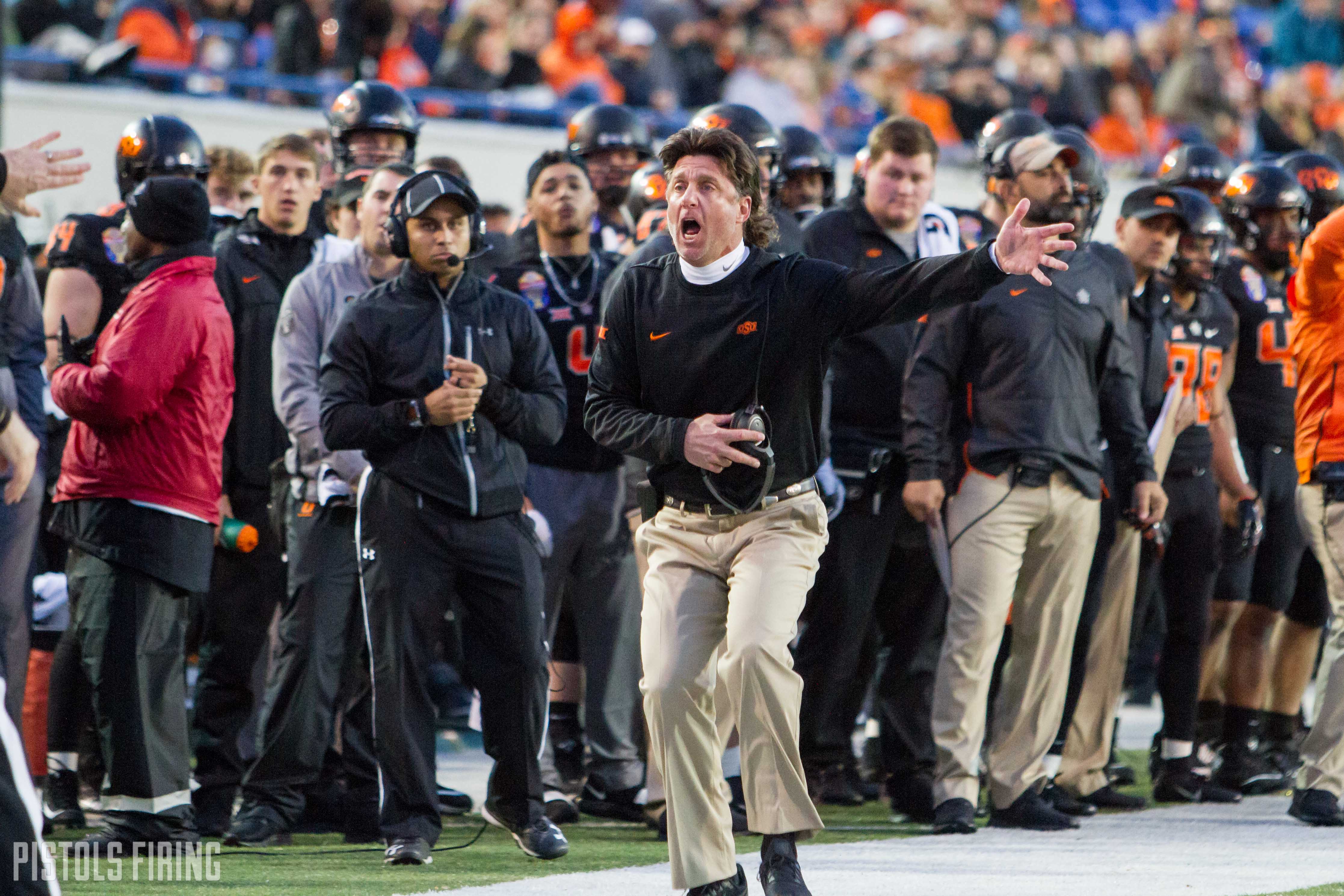 MEMPHIS, Tenn. — It was an innocuous enough question. I asked Tyron what it is about big games that gets him going. He didn’t really have an answer, but he did say at the end that Mike Gundy did some things in the locker room before Monday’s Liberty Bowl to get OSU jacked up to play a ranked Missouri team. Everybody at the dais — Enoch Smith, Justin Phillips, Chuba Hubbard and Taylor Cornelius — laughed like they knew something we all didn’t (which they did).

So I had to follow it up: What did Gundy do?

I can’t even begin to speculate (jk, this is a blog, of course I can). Did he … light up a punching bag with Chase Daniel’s face on it? Curse out a life-size FatHead of Blaine Gabbert? Sacrifice some of the grass you know he kept from that ’07 game at Faurot Field on an altar made of rocks Todd Monken stole from the Rock M in 2011? Anything and everything is on the table.

“Oh don’t tell them,” said Gundy to his players. “My mom would tip over back home. I’ll say this, I asked them to take the challenge of playing in the SEC and being more physical than them. In a different way, different language. Other than that, that’s what I asked them to do. And they did.”

It’s infuriating (?), perplexing (?), frustrating (?), confounding (?) that Oklahoma State goes out and punches a top 25 Mizzou team in the mouth like they did to open up a big lead they couldn’t even give back with two picks and one of the worst fake punts in bowl history but lays eggs against less physical, far less talented teams like TCU, Kansas State and Baylor.

This is the theme of the season — nothing you guys don’t know — but part of me wonders if the team goes as Gundy does. Gundy was locked in on Monday. On the sideline and apparently in the locker room. Was that enthusiasm there all season? I have no idea. I’m not in the locker room, not at practices, not in the middle of it.

Maybe it was, maybe the team just responded differently because this game was on ESPN instead of FS1. Or maybe organizations take on the rhythms of their leaders. Maybe Gundy has become disenchanted with rote games. That seems doubtful to me — although I know many of you have opined that and much more! — but maybe it’s true.

And if so then maybe this game — similar to the 2007 game in Columbia — will be a turbo boost OSU needs — Gundy needs — heading into the next few years of Oklahoma State football.

Whatever the case, it was clear that Monday’s Liberty Bowl got the attention of a team that needed their attention got. With a big 2019 on deck as the Pokes try and rebound from one of the weirdest years of the modern era, Gundy needs 12 straight games of what he got in Memphis. Locker room histrionics sold separately.