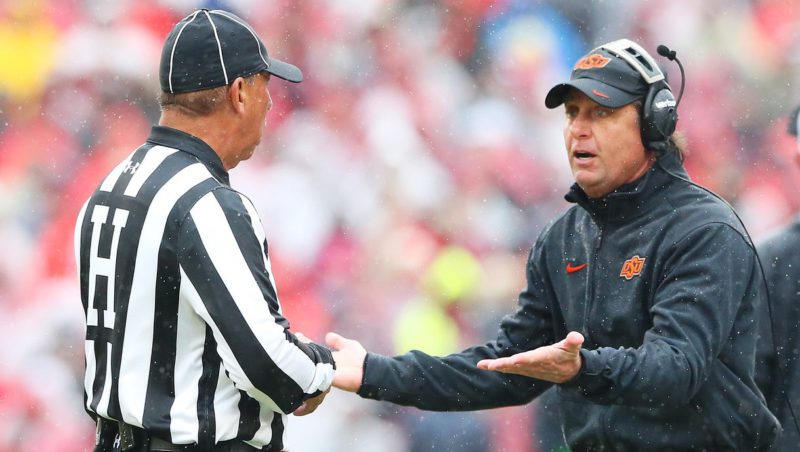 With 13 minutes left in the Bedlam-Big 12 title game, Oklahoma State was down 31-20 on the road in the Sooners’ house. After the Cowboys gave up a play that seemed like it would close the door on OSU’s Big 12 title hopes, Samaje Perine fumbled the ball at the Oklahoma State 18-yard line.

A glimmer of hope?

The Cowboys got their turnover. The team that leads the Big 12 in turnover margin rarely loses a game when they’ve won that battle. Unfortunately, the Cowboys didn’t pay it off. They dispossessed Perine. But Oklahoma State needed to get down the field and score.

They again leaned on the run game with Justice Hill making one of the few second-half positive yard plays to start. Then, after a horribly marked (yellow line) first down marker was missed by Blake Jarwin just by inches, the Cowboys faced fourth down and very short at the Oklahoma 40-yard line.

What is Mike Gundy going to do? Punt … right?

Nope. Let’s call a timeout right after the officials ate up enough time to decide I was able to grab popcorn. Then decide to just to send your punt team back to the bench and let Chris Carson run for 16 yards… There you go, Coach.

Unfortunately, the Cowboys found themselves at third-down-and-ten at the Sooner 29-yard line after a predictable draw play saw Justice Hill register a no-gain.

So what do you do?

Hand it off to Chris Carson for an impressive run that almost made the first down.

Throughout this game (and in many past in-state Big 12 contests) Mike Gundy has been accused of coaching conservatively. This one may take the cake.

Facing a fourth and short, Gundy held the dice in his hand. Instead of going for a first down, he elected to roll Ben Grogan out. It hooked wide left.

I’ll say that the fourth-and-two field-goal attempt does less to cement Gundy as a “little brother” coach than the previous play call on third down that was obviously designed to get three points instead of seven.

Now, Mason Rudolph had one of the worst games of his career and I can’t really blame the weather. When a quarterback of his caliber finishes with a 44 percent completion rate, 186 yards and no touchdown passes, you need to look behind center.

Rudolph’s struggle on the road is a real thing.

The field was wet. The ball was wet. But you can merely glance at Baker Mayfield’s stat line and you’ll dismiss that from your excuse list.

Back to Gundy. He coached scared. There’s really no other way to look at it. But I think it was more of a collective effort on his part than just that one play/drive.

If Grogan makes that kick, it’s a one-possession game with almost ten minutes remaining. But my problem isn’t with the miss. It’s with what the decision to go for a field goal represents. A field goal? A smart play, given the numbers, that could bring it to one possession. Going for it? That shows some gumption that you’re all in.

Back-pedaling into the first half, another prime example of this. The Cowboys got a 49-yard kickoff return from Barry J. Sanders out to the 50. With 18 seconds left, even my daughter was drooling at the thought of a potential score before the half. Instead, they ran the clock out. With time and timeouts in hand.

The Cowboys left a lot out on Owen Field, which is disappointing. But for all the swagger and moxie the mullet gives Mike Gundy, he had the opportunity at just his second conference title and put a cap on it.