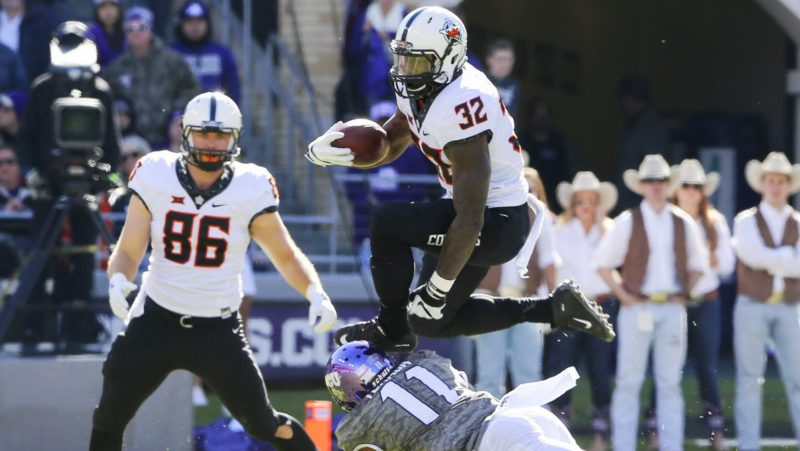 “Chris is exactly what we hoped he’d be.”

Mike Yurcich was the front man for Oklahoma State’s offensive press conference on Tuesday in San Antonio. His charge? To open the media availability for OSU’s offense as they looked forward to Thursday’s Alamo Bowl against Colorado.

His goal? To make a point of each of his players who graced the podium.

He started with the two obvious choices, Mason Rudolph and James Washington, who mostly spoke about their decision(s) to return to Stillwater in lieu of the NFL Draft. He finished with the elder statesmen, red-shirt senior Austin Hays and red-shirt junior Zach Crabtree.

But book-ended in the middle was the second-year player who will play his last game as a Cowboy on Thursday.

Yurcich went on about his senior running back and the “two” in his newfound 1-2 punch in the ground game.

“Physical, tough back who really overcame a lot of adversity this season, came back really strong from an injury, and has really produced in a big-time way, physical, punishing back that’s just really an all-around back that you never have to sub out in any situation.

When Chris Carson came to Stillwater he brought lofty expectations, but ineffective play from he and the offensive line, along with some injuries hampered him in his first year-plus.

But in the seven games since returning from an early-season hand injury Carson has been a man, amassing 453 yards and seven rushing touchdowns at a clip of 7.7 yards per carry.

For his perseverance and huge rule in the Cowboys last six wins, Carson was voted a team captain by his teammates.

“At first I was kind of shocked because there’s a lot of good players on the team that are deserving of that award,” said Carson. “I’m going to take advantage of it, and it’s a blessing, like I said.”