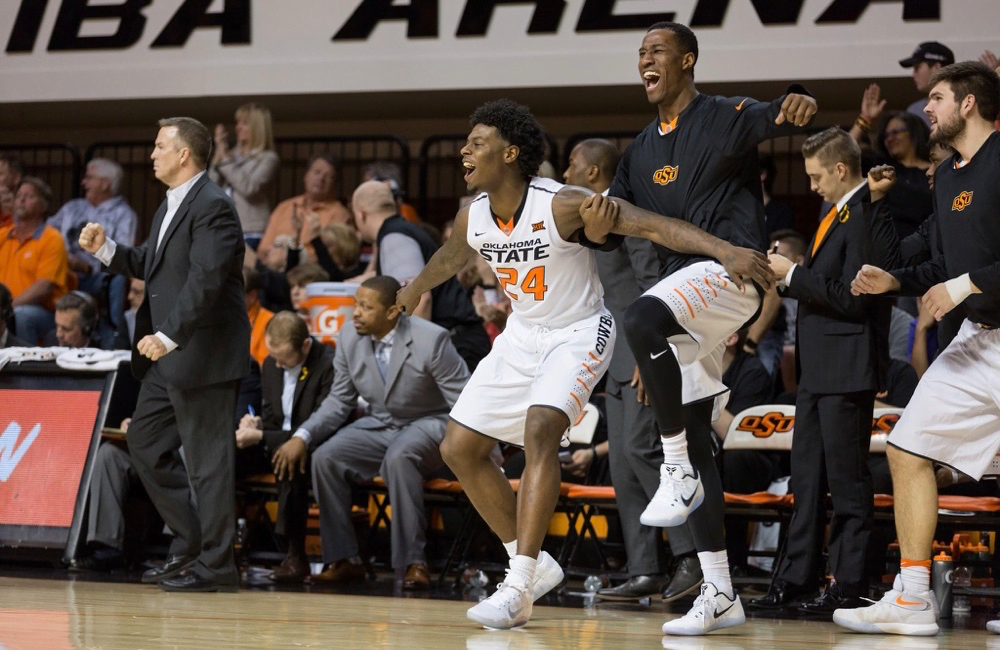 In case you’re an Oklahoma State basketball fan living under a rock, Mike Holder hired the replacement for Brad Underwood, who promised to be in Stillwater until they “put him in the ground or something else happened.”

Well, something else happened. Illinois Athletic Director Josh Whitman slapped a 6-year, $18 million contract in front of him, and before we could finish the chorus to “Friends in Low Places”, Underwood was in Champaign, Illinois, giving the Illini faithful the same old song about his new “dream job” we heard a little over 365 days ago.

Pistols firing from Champaign! Welcome to the family. #okstate pic.twitter.com/8Rb9DUOSdA

Understandably, Oklahoma State fans were left hurt and confused. The program had life for the first time in around a decade. Underwood was a direct descendant of the proverbial Henry Iba Coaching Tree. The Old Barn was rocking like it hadn’t since the days of the Graham Twins, Tony Allen and John Lucas III, with Eddie scowling and pacing the sidelines, swallowing up challenger after challenger.

Cowboy basketball was back. Or so it seemed.

So we broke down the possibilities going forward — the #BringDougHome movement exploded almost immediately, in a manner similar to last year.

However, this time, it felt a little more realistic.

We’d been burned Underwood’s promises and slick talk. Kyle P. called it out — we needed trust, and trust was knocking on our front door, in the form of a former No.  44 and all-time assists leader in Oklahoma State history.

We heard the reports that Dougie G. got an interview Thursday, albeit on the same day with the leftover assistants from the Underwood era and James Dickey, a man who is beloved in Stillwater and revered by many in the program, but not a serious candidate.

Lamont Evans, Danny Henderson, Mike Boynton Jr., James Dickey, and Doug Gottlieb. It felt like the opening round of interviews, almost a courtesy to them and to Doug.

Then the almost unthinkable happened — one of the leftovers of Underwood, who had only been in town for a year, got the job 24 hours after interviewing. Mike Holder decided that Brad Underwood’s replacement was already in the room.

Mike Boynton Jr. has been put in an incredibly difficult situation right off the bat. He is walking into a relationship where the trust has just been broken between a fan base ant its athletic director and his vision for the program. Unfairly, Boynton Jr. is tasked with keeping the momentum moving forward from last year, but likely without the maestro of the 2016-2017 orchestra — Jawun Evans.

He deserves our full support and backing whether we agree with the hire or not — but there is a larger problem that deserves to be examined and discussed. How does Mike Holder view the basketball program going forward, and will OSU ever spend again to bring in the coach to push it to the pinnacle of college hoops?

The Big 12, along with the ACC, boasts the most impressive lineup of head coaches in the college game. Bill Self. Bob Huggins. Lon Kruger. Jamie Dixon. Scott Drew, for all his faults, has made four Sweet 16s and two Elite Eights at Baylor.

Up and comers such as Chris Beard, Steve Prohm, and uh … whatever Bruce Weber is. This is the ’27 Yankees lineup, and OSU called up a rookie from AAA to pitch. That’s a lot to ask.

Maybe Boynton Jr. will crush. The cupboard is not completely bare, given that Jeffrey Carroll returns for his senior year. He’ll be able to surround the Big 12 Player of the Year candidate with a supporting cast of Lindy Waters III, Davon Dillard, Brandon Averette, Yankuba Sima, Mitch Solomon, Cam McGriff, Dizzy, and potentially couple of recruits that have the makings of stars at the college level.

If he can keep them committed. A big if. I present Zack Dawson.

But throughout this quick and head-scratching hiring process, Mike Holder may have made a costly trade. Keeping the band together for 2017-2018 at the risk of the next 5-10 years of Cowboy basketball. It’s hard to believe, with the evidence currently on the table, that Mike Boynton Jr. will bring more success over the coming years than other candidates available may have.

Maybe he will, but the odds say that’s unlikely.

If Mike H. is honest with himself, the evidence of this is the fact that OSU will be paying a first-time head coach less than Frank Haith, the head coach at Tulsa who went 15-17 this year. In the American Athletic Conference. It’s a low-cost prayer that Boynton Jr. brings a few more tournament appearances and keeps it going, likely at the fraction of the cost of not only Brad Underwood but the competition within the Big 12.

Nothing in college hoops (or sports) is a sure thing, but generally the lower the cost of a coach, the more risk you take on, especially when it comes to high-level hoops like OSU plays. You get what you pay for, and no matter what Holder has said this weekend or will say at tomorrow’s introductory press conference for Boynton Jr., he already spoke volumes with his checkbook on Friday.

It’s a tough pill to swallow for those of us that care deeply about the future of Oklahoma State basketball and would do anything to see Gallagher-Iba rock 10-15 times every November to February.