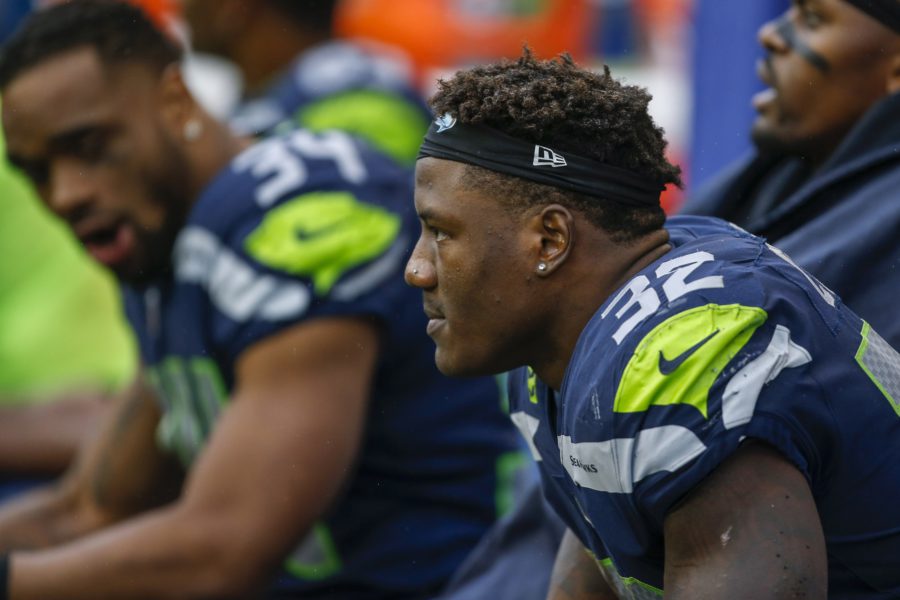 We’re halfway through the NFL preseason and plenty of former Pokes saw action while several position battles waged on. Let’s take a snap shot of where these guys are heading into the second half of the fauxball season.

Chris Carson didn’t have his best showing on Saturday. With a chance to further distance himself in the race for Seattle’s RB1 while rookie Rashaad Penny was out with injury, Carson carried the ball nine times for just 34 yards but fumbled twice, including once inside the 1-yard line which resulted in a touchback for the Chargers’ defense.

“Chris ran the ball really well, but it gets clouded because he gave the ball up inside of the 1,” said Seattle head coach Pete Carroll.

It was’t all bad, though. Carson broke a tackle on the opening drive and ran 23 yards to pay dirt.

Unfortunately, that TD was erased and the play called back thanks to a block-in-the-back call.

Run-pro looks so good, but man, how about Chris Carson, our running back. Takes four guys to bring him down here. pic.twitter.com/lG5Jwi9Qvx

To Carson’s credit, he never fumbled in college or in high school, and preseason stat lines don’t count. He is still firmly in the No. 1 spot for Seattle and has a chance to bounce back when the Seahawks head to Minnesota to face the Vikings on Friday.

After leading the Steelers with 114 receiving yards and two TDs on five catches during the preseason loss to the Packers, Washington continues to earn the confidence of his teammates and coaches.

The latest depth chart from the team shows that the rookie wideout has worked his way up to second-string consideration.

After several impressive catches, James Washington is getting more reps with Ben Roethlisberger. You can tell the timing is still off between the two, but overall Washington has shown big-play ability. pic.twitter.com/UcwA4RSj2w

As we get closer to real football, expect the competition level to ramp up from opposing defenses, but Washington will soon have the benefit of playing opposite the likes of Antonio Brown and JuJu Smith-Schuster — and catching passes from Ben Roethlisberger. Things should just get better for the rookie.

Tre Flowers thriving despite tough transition for a rookie

Flowers continued to start at right CB for the Seahawks during their 24-14 loss to the Chargers.

On this third-and-7 play, Seattle dials up the corner blitz for Flowers who gets credited for a 0.5 sack of Cardale Jones. He also tallied two tackles.

Here is Rasheem Green's 0.5 sack vs the #Chargers:

SB Nation’s Field Gulls took an in-depth look at the tough transition from college safety to Seattle cover man this week. It’s a pretty interesting read and sheds a little light on what NFL scouts/teams look for in prospective defenders.

Teams looked at Flowers’ body of work – moving between a bunch of positions and techniques – and emphatically said: Nah. He’s not a safety. The Seahawks didn’t grab Flowers until the fifth-round. They don’t view him as a safety, either. Nor as a slot. They want him to learn one of the most taxing positions anywhere in the sport: Seahawks boundary corner.

Again, why? Don’t we think of that kind of mobile, athletic guy as a moveable, defensive chess piece? Hasn’t every team been falling over themselves to add a middle of the field Tasmanian Devil?

This is an interesting, sport-wide question. Flowers will be a fun test subject. [Field Gulls]

Flowers seems like a lock to make the 53-man roster as Pete Carroll continues to groom him to be a viable starting corner in his system.

Brandon Weeden gets some work

A week after his two-score performance in his Texans’ return, Brandon Weeden took a back seat during the Texans’ 16-13 win over the 49ers. The former Poke QB went 7-of-15 for 50 yards as third-string quarterback Joe Webb took the lion’s share of snaps.

Weeden is still slated as QB2 on Houston’s depth chart and reps should fall more in line with that pecking order as preseason moves along.

The Cowboys went with a two-tight end formation to start their preseason contest against the Bengals giving former Cowboy Back (this is getting confusing) his first official/unofficial start.

He caught two of his five targets for just 11 yards, but he still continues to impress coaches in practice where he has even been working receiver drills.

Pro Football Focus listed the Jarwin-Dak Prescott connection as one to watch for fantasy owners through the preseason. Not bad company for the former college and NFL walk-on.

Marcell lines up against Ramon

Ateman caught just one ball during the Raiders’ 19-15 loss to the Rams, but he made it count. He whizzed by former teammate Ramon Richards before scampering for a 25-yard gain.

7th round pick Marcell Ateman showing some YAC ability. Has flashed a bit in preseason and training camp. pic.twitter.com/kd3P1Oj6QG

After not missing a single game during his first six seasons in the NFL, the former Lou Groza winner at OSU was sidelined for four-straight contests in 2017. And there have been concerns about his health heading into 2018 after some up-and-down results during training camp.

After sitting out for the Cowboys’ first preseason game against San Francisco, Bailey made his 2018 debut with a single field goal attempt that he made from 35 yards.

The former Cowboy DB spelled suspended Pro Bowl corner Jalen Ramsey during the Jaguars’ second preseason game against the Vikings. And he didn’t look half bad, logging a tackle and two pass breakups.

Was impressed with this play by #Jaguars CB Tyler Patmon against the #Vikings. Playing inside nickel vs. trey bunch left on WR Adam Thielen (inside slot WR). Clicked and closed well against one of the best route runners in the game for the PBU. pic.twitter.com/Vsm8vn5pKZ

Ramsey returned to practice on Monday but Patmon seems intent on carving out a role in this stingy Jacksonville defense.

The former OSU defensive back missed the Broncos’ preseason game Saturday due to migraines, as well as some practice this week. But hopes to be back by Friday for the Broncos next preseason matchup against the Redskins.

It’s a minor setback this week but could ultimately hurt his chances of making the 53-man roster. Hunter was signed by the New York Giants after going undrafted in 2016. He was waived by the Giants last season.

Washington: "I tell you what, you want strong hands, go bale some hay."

Kaboly: "Don't you have machines for that?"

Washington: "No, not where I'm from. We don't have money out there."

Kaboly: "I guess I watch too much TV."

Great catching up with these dudes last night! #gopokes