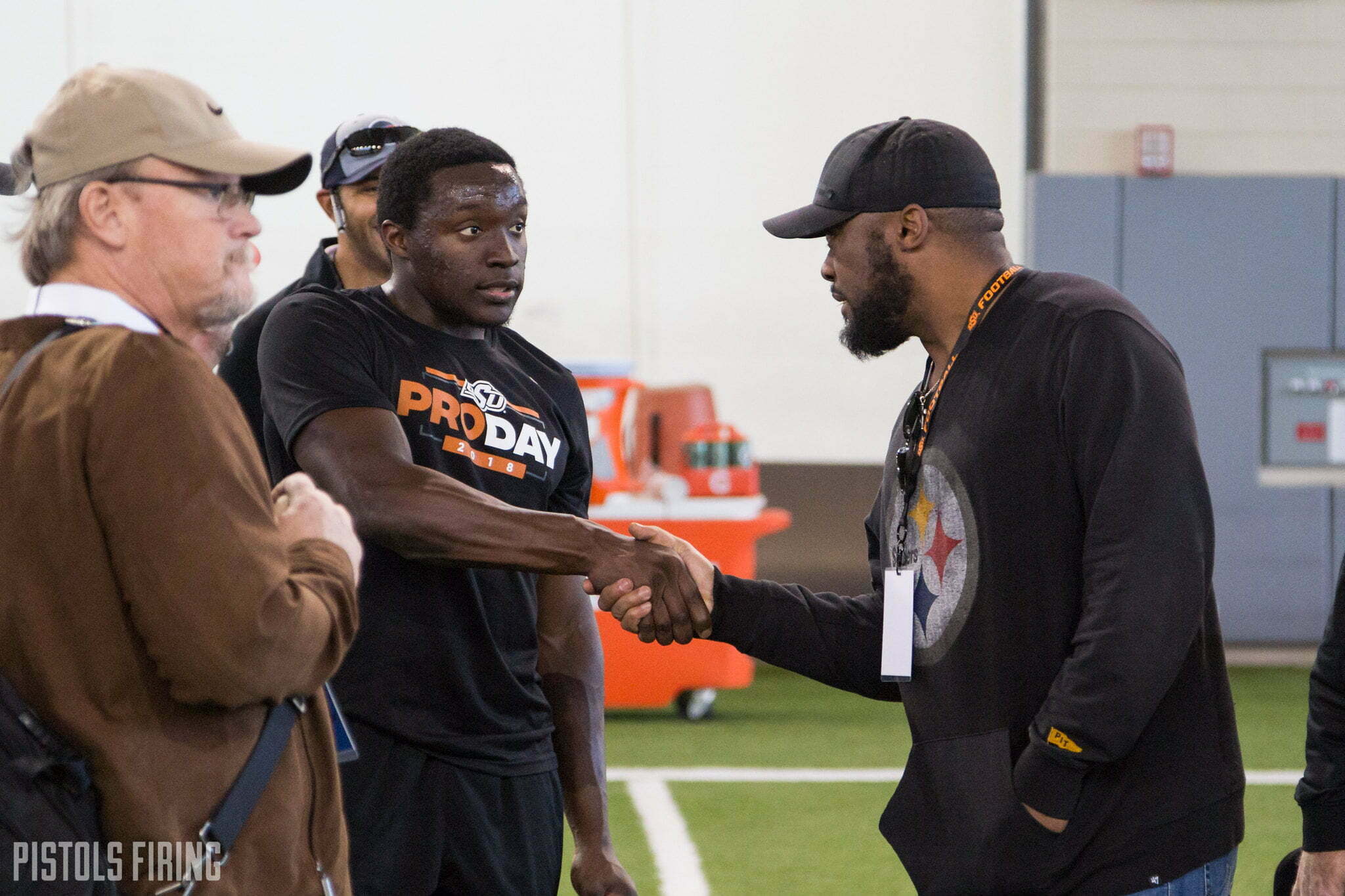 Heading into the final week of the regular season, there are a couple of former OSU stars with question marks awaiting them in the offseason. Both James Washington and Emmanuel Ogbah are one game away from free agency.

We’ll get into who might stay and who might go. But first let’s take a look at some highlights from former Cowboys from the NFL’s penultimate week.

Rookie running back Chuba Hubbard scored his fourth touchdown of the year during the Panthers’ 18-10 loss at New Orleans. How about that stiff-arm?

Hubbard has started nine games this season filling in for injured Christian McCaffery. With one game remaining, Hubbard leads Carolina with 564 rushing yards. His 730 total yards rank third on the team.

The former OSU cover man continues to make plays and move up the Browns’ depth chart. On Monday night, he ended the half of the Cleveland’s loss to Pittsburgh with his first career interception. (Note: AJ Green had as many targets from Big Ben as James Washington.)

For the second straight week, James Washington didn’t catch a ball. He’s had three targets over the last two games. Despite efficient catch rates, and the second-round investment Pittsburgh put into him, Washington constantly loses snaps to other receivers.

When the Steelers suffered through injury woes earlier this season, Washington couldn’t gain a foothold. JuJu Smith-Schuster was placed on IR after Week 5 and those snaps went elsewhere. He’s now been leapfrogged by former sixth-round pick Ray-Ray McCloud.

Washington has to be frustrated. Who wouldn’t be in his situation? He reportedly wanted be traded last offseason, but now he may just be looking forward to this offseason.

Except James Washington. He can get as frustrated as he wants, apparently.

The Steelers face divisional rival Baltimore in their season finale Sunday, with barely a breath of hope of making the wild card. With Washington set to become an unrestricted free agent next season, it may be his last in Steel City. If it is, you’ve got to think there are teams out there that would be interested in Washington’s talents.

It’s also important to note that this may also be Ben Roethlisberger’s final game as a Steeler. He recently spoke about retiring but has yet to make an official announcement. If he does then, as it sits now, Washington’s former college QB Mason Rudolph appears next in line to replace him. But a lot can change in an offseason.

Emmanuel Ogbah had been one of the few bright spots on the Miami Dolphins defense, but he still does not have a contract. That was the story last year, after turning in a career-high nine sacks in his first season in South Beach. With one game left in 2021, Ogbah has matched his sack total and apparently still wants to stay, but he’s still yet to ink a deal.

Now he could go into free agency with 18-plus sacks over the past two seasons and the suitors are likely to be even more interested than they were last summer.

According to league sources, the Dolphins were hesitant to make an offer to extend Ogbah before the season started. They told his camp they wanted to see how the season played out before trying to lock him up on a multi-year deal coming off a career year.

Now that he’s double down on his sacks, serving as the premiere pass-rusher on the unit that leads the NFL with 45 sacks it’s safe to assume legendary rapper Fat Joe infamous line, “Yesterday’s price is not today’s price,” applies.

Unlike Washington, Ogbah has been vocal that he wants to stay put. So maybe it’s just a matter of time before he’s locked into a multi-year deal. The Dolphins end their season with a matchup against the New England Patriots on Sunday. For Ogbah it will be a chance to add to his impressive year, and bolster his bargaining chips.