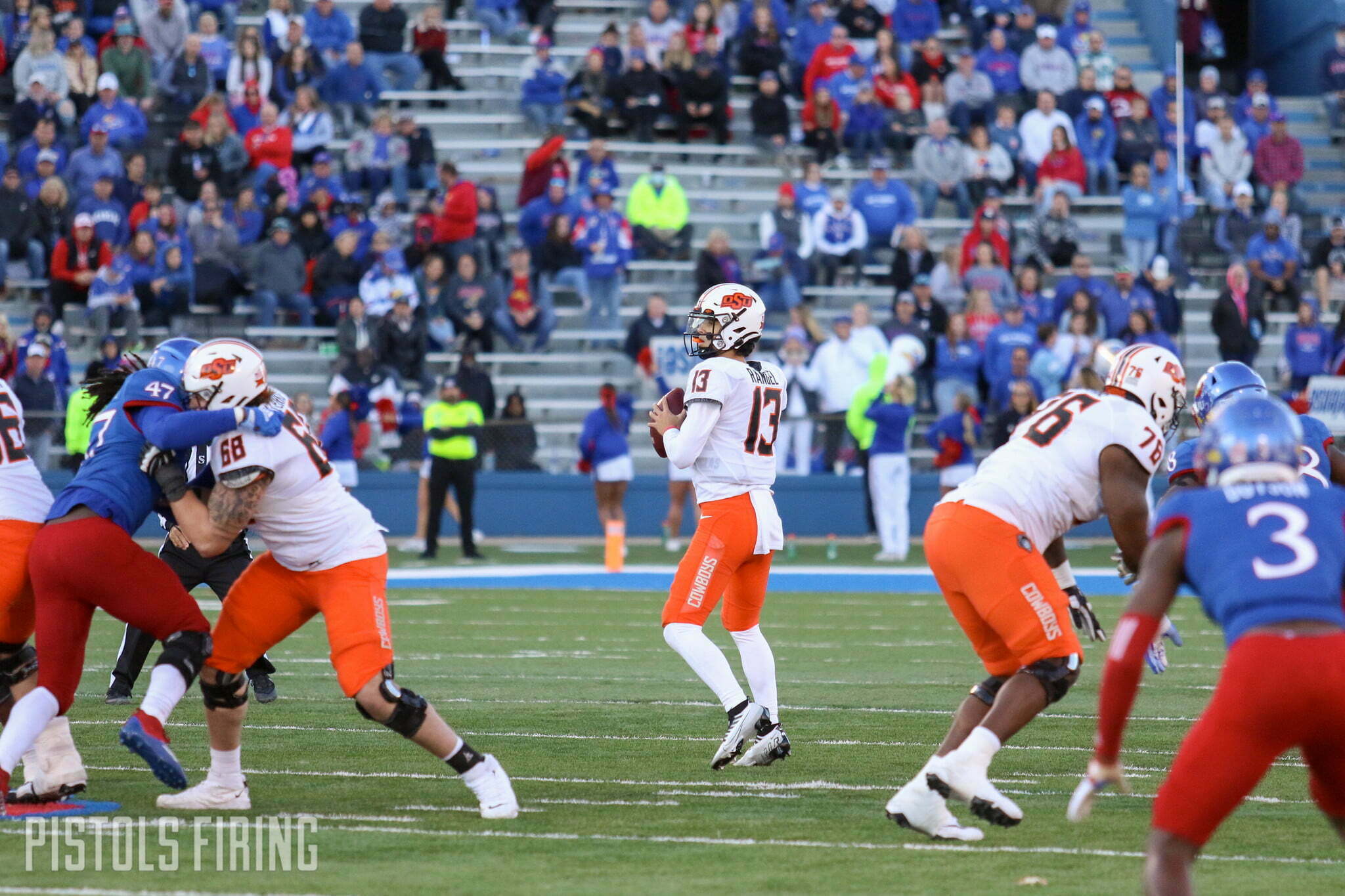 STILLWATER — After two woeful weekends in the Sunflower State, the Cowboys return home this weekend for a game against Iowa State.

Oklahoma State players were available to the media after the Cowboys’ Tuesday evening practice. Here are three things that stood out.

It’s been a rough two weeks for the Cowboys’ defense, allowing a combined 85 points to Kansas and Kansas State.

OSU’s D was always going to take a step back this year without Malcolm Rodriguez, Devin Harper, Kolby Harvell-Peel, Tanner McCalister, Jarrick Bernard-Converse and Tre Sterling, but one area the Pokes were supposed to be pretty good in is the pass rush.

After leading the country in sacks last season, the Cowboys brought back Collin Oliver, Brock Martin and Tyler Lacy. But OSU didn’t record a sack against Kansas or Kansas State. The Pokes rank sixth in the Big 12 in sacks this season.

But OSU’s inability to get to the quarterback spurs from their inability to stop the run, according to Oliver.

“Stop the run — I’m gonna say this until the wheels fall off, we just can’t stop the run right now,” Oliver said. “Once we do that, we’re gonna earn the right to rush the passer and life’s gonna be a whole lot easier for us. Stopping the run is the big key.”

The Cowboys’ past four opponents have averaged 244.5 yards rushing a game. Some of that has to do with run fits, and some of it has to do with tackling. Mike Gundy said the Cowboys missed a lot of tackles against Kansas, a team that ran for 351 yards on the Cowboys. It’s been a point of emphasis this week.

“It’s a mixture of both, the want to bring somebody down and the technique — wrapping and rolling,” Oliver said. “We’re just not harping on that in game like we do in practice. We work on it all practice, and then in game it flops. Just keeping that consistency up and going out there and getting guys to the ground, it’s gonna be a big emphasis this week.”

After Freak Injury, Langston Anderson Gets First Catch of Season

Whether it’s his long, muscular frame or his four-star pedigree, there is a lot to like about Langston Anderson, but injuries have derailed his college career to this point.

Anderson was set to start the Cowboys’ Fiesta Bowl-winning 2021 season at the X receiver opposite Tay Martin. But in warmups for the Cowboys’ season-opener Missouri State, disaster struck.

“Almost done with pregame, the game was about to start in, I think, like eight minutes,” Anderson said. “Then I run one more fade, my receiver coach throws it to me, I catch it. All I did was walk. I just feel something pop. My adrenaline is going. I’m like, ‘It’s not that bad.’ Then like five minutes later it started to hurt real bad.”

That kept him out the entire season after he missed a lot of time in the 2020 season with injury, as well.

He had three catches for 61 yards against Kansas this past Saturday, his first catch since the McNeese State game in 2019 — a 1,154-day gap.

Three teams have stormed the field against Oklahoma State this season — a weird sign that the Cowboys are at least doing something right.

The Cowboys’ offensive line has made a habit of making sure its quarterbacks get back to the locker room safely. It started this season in Fort Worth. With a sea of purple students flooding onto the field, Hunter Woodard and Taylor Miterko each had a hand on Spencer Sanders shoulder pads, getting him to the tunnel secret service-style.

But it wasn’t just with Sanders. Kansas had a bit of a delayed field storming this past Saturday. Center Preston Wilson was already halfway to the locker room when he about-faced and went and grabbed Garret Rangel to get the true freshman off the field.

“Nobody tells you to do that,” Wilson said. “When you tell a man you’re going to protect him, you protect him. That’s part of it, whether on or off the field. When you tell someone you have their back, that means you have their back. And I told [Rangel] before the game, ‘I have your back, no matter what happens. I’m gonna be with you. I’m gonna make sure you’re taken care of.'”