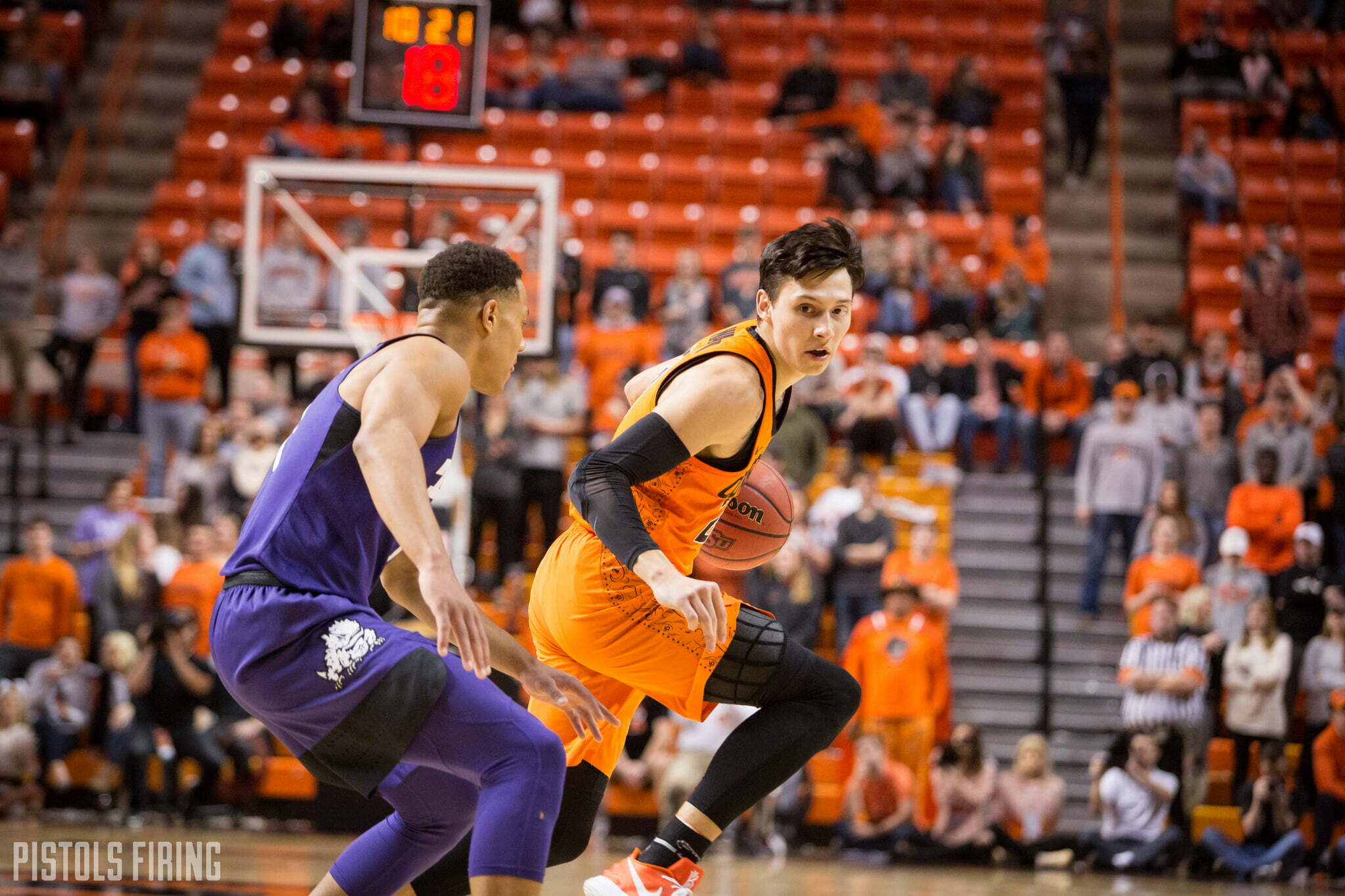 STILLWATER — The Oklahoma State basketball team held a media availability after its Monday practice. If you’d like to watch the interviews in full, you can do so here. Here are some of the highlights in written form.

On a dark bus ride home from Manhattan, Mike Boynton read “The Dichotomy of Leadership” while occasionally checking in on scores from around the country.

Boynton’s team had just got beaten by 39 points, narrowly avoiding the largest loss in program history. Checking scores, it was obvious his team’s next game wasn’t going to be much easier, as Texas Tech beat Kansas 91-62. OSU junior Lindy Waters said the bus ride was mostly quiet. A lot of players were laying down.

“I sensed some disappointment,” Boynton said. “Maybe a little bit of embarrassment. They took us to the woodshed. From start to finish, it was pure domination.”

The team had Sunday off before meeting again Monday. Boynton said he was excited to see his team again, and that the squad had a good practice with good energy.

“We’ll all be better for having gone through this,” Boynton said. “I really believe that. I’m looking forward to that day, when it’s better for us.”

Bad Matchup on a Bad Year

Last season’s Cowboys were a problem for league monarch Kansas.

OSU beat the Jayhawks in Phog Allen Fieldhouse before beating them by 18 points in Gallagher-Iba Arena. It wasn’t that the Pokes were outright better than Kansas, as KU went on to win the Big 12 and was a one seed in the NCAA Tournament, making it to the Final Four.

The Cowboys’ raw athleticism was simply a bad matchup for the Jayhawks, something OSU is experiencing on the other end this season.

Even with the Cowboys down to seven scholarship players, OSU has only been dominated in three Big 12 games, both Kansas State games and against Texas Tech. The Wildcats’ and Red Raiders’ hard-nosed defensive style counters the lack of depth and sometimes stagnant offense of the Cowboys. Of the 351 NCAA basketball teams, Tech is second in the country in scoring defense, and K-State is fourth.

“(K-State is) really physical, really aggressive,” Boynton said. “They can really take you out on the perimeter, which is our strength. Sometimes that happens where in a certain year, the teams you don’t match up with as well are the teams that are at the top.”

Dee Mitchell’s Delayed Chance to be a Cowboy

Before the season, Dee Mitchell came to Mike Boynton’s office to ask about possibilities of walking onto the OSU basketball team.

Mitchell, at 6-foot-2, is a point guard, something that, at the time, Boynton had plenty of with Isaac Likekele, Mike Cunningham and Michael Weathers. Boynton told Mitchell he didn’t know if him walking on was going to be a possibility.

Jump to 2019 and Boynton was without Weathers and Cunningham, leaving only one point guard on his roster. So, Mitchell, an AAU teammate of 2019 signee Avery Anderson, showed up to Boynton’s open tryout where his patience prevailed, and he made the squad.

Mitchell played nine minutes against Kansas State on Saturday, where he scored his first career points off a pair of free throws. Boynton said he still needs time to learn the offense, as he hasn’t been on the team all that long, but Boynton said he has seen good things.

“Dee’s a really good player,” Boynton said. “And he plays a position where you probably need another body anyway. Going into the season, the two Mikes (Cunningham and Weathers) both play that position, and now Lindy’s being asked to do that more. Dee’s the most natural point guard that we have, even moreso than Ice (Likekele) in some ways ’cause it’s the only position he’s ever played. He’s coming along.”