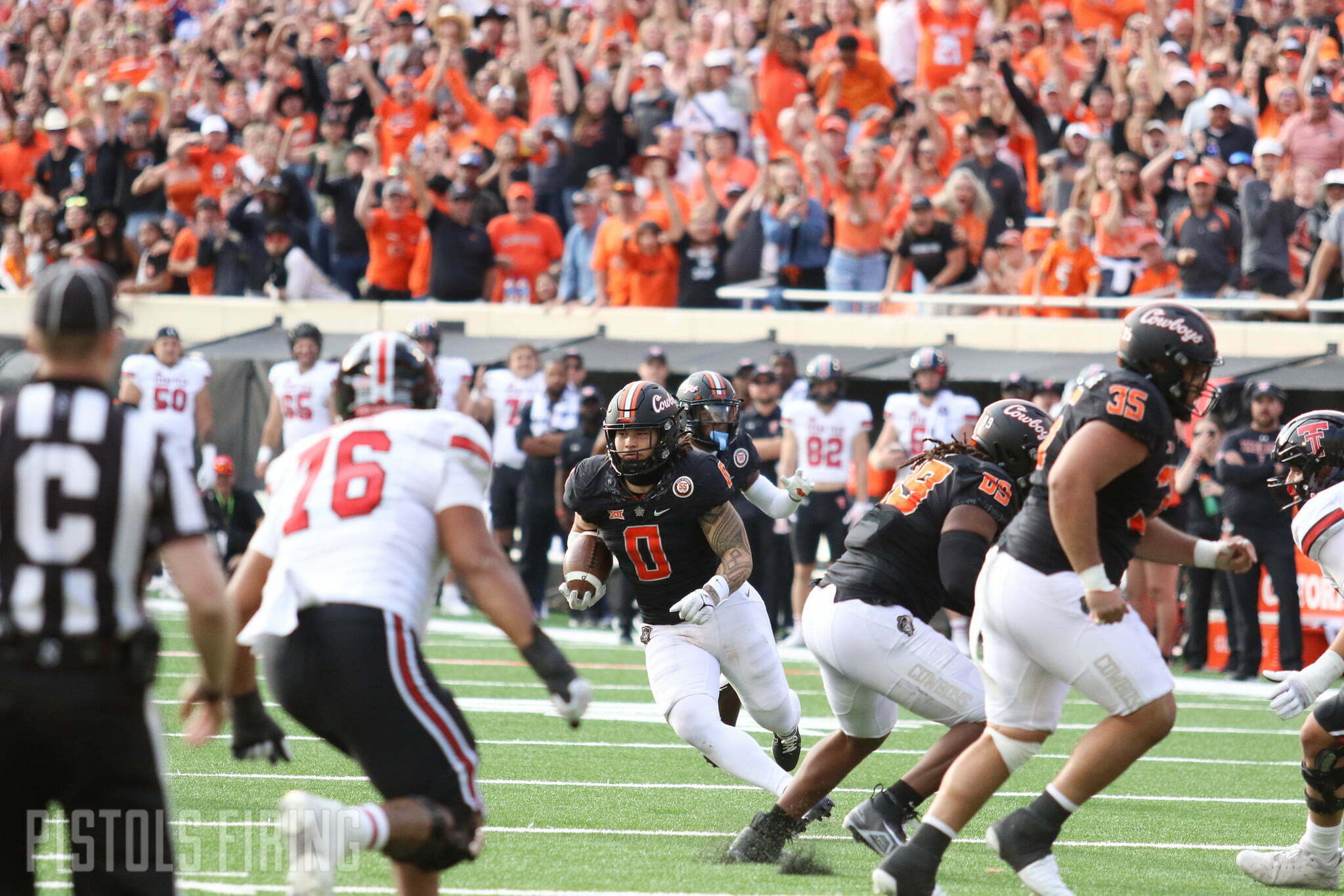 STILLWATER — With as many plays as Saturday’s game had (190, to be exact), a lot happened.

I set out 10 Thoughts after the game, but here are three other takeaways from Oklahoma State’s 41-31 win over Texas Tech.

Mason Cobb was credited with 13 interception return yards on his pick Saturday, but he ran about 50 yards to get those 13.

Cobb made the interception running toward the Texas Tech sideline. He cut back from about the numbers and ran straight across the field before getting tackled near the numbers on the OSU sideline. It was a big play late in the third quarter of a tied game, but Cobb was trying to make it an even bigger play.

“I was trying to put it in, man,” Cobb said. “I wanted the six. It sucks. It’s a lot harder to run the ball in college than in high school.”

It was Cobb’s first career INT in what has been a strong start to his tenure as a starter. Cobb leads the Cowboys with 38 tackles and 7.5 tackles for loss. Only a junior with two more seasons of eligibility after this year, Cobb will probably have another chance at some point to get into the end zone.

“He ran well with the ball,” OSU coach Mike Gundy said. “I think he played offense in high school some. I can’t remember. But right before he went down, he got the ball loose out here. Made me a little nervous, but he did run with the ball well.”

Trace Ford has an innate ability to bat passes down at the line of scrimmage, so much so that he is tied for third in the Big 12 in pass breakups despite being a defensive end.

Ford had a pass breakup, a thunderous tackle for loss and three quarterback hurries in Saturday’s game. He is up to five PBUs in OSU’s first five games, which leads the team. The only game he hasn’t had a PBU in this season was against Central Michigan, but he made up for it with a pair of knock downs against Arizona State.

He is tied with Texas’ D’Shawn Jamison for third in the Big 12 in PBUs behind Texas Tech’s Rayshad Williams and Malik Dunlap, all of whom are defensive backs.

In a game with 107 pass attempts, there was only one pass interference called Saturday and one defensive holding.

The officials were letting the wide receivers and defensive backs play physically Saturday. There were a few times both fanbases were justified in gripes when no flags were thrown. Like in the first quarter when Bryson Green outmuscled a Tech corner for a big completion. Or later in the game when Jaden Bray got held on a cut, which messed with timing on his route. But consistency is all you can ask for, and for the most part, the officials were consistent.

“If you don’t know (officials are allowing physicality), you’re like, ‘Man, blah, blah, blah,'” Green said. “But as soon as you get into the game, I love a physical DB just like I love refs that let receivers play the ball in the air.”