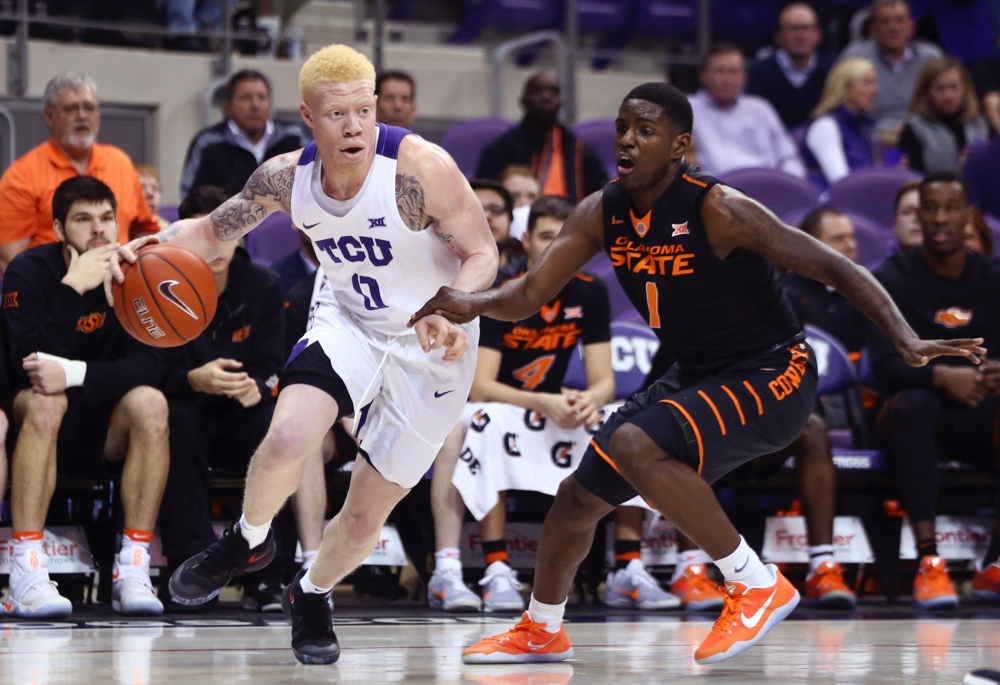 FORT WORTH, Texas — I was in attendance on Wednesday evening at TCU as Oklahoma State got its sixth Big 12 win and first sweep of a Big 12 team under head coach Brad Underwood with a 71-68 victory.

Shout out to the TCU media relations for shooting me a last-minute credential. I have notes from the game.

• This is the first OSU road game I’ve been to since maybe like 2009 when OSU played in Allen Fieldhouse (before I started the blog). It’s incredible how different the sport is in person. I know this in my head of course, but it was good just to remember how fast and athletic the game is. It’s good to get out of my shed every once in a while.

• At one point in the first half after Dillard made a couple of bad plays and Underwood took him out, Phil Forte put his arm around him in consolation. I don’t know why, but the idea of Phil trying to talk Dillard off the ledge after an emotional couple of minutes was pretty hilarious.

• Dizzy is spectacular in person. The entire experience. Gatorade towel around his neck. Screaming at the rafters on and-1s. Hyping up the seniors. Blowing on his fingers after dudes hit threes. Ready to go in and pull from 37 feet at a moment’s notice. I got the full Dizzy experience, and I loved it all.

• Solomon does a lot of little things that don’t show up on TV. He fights for offensive boards, sets in-transition picks and is generally in the right position on defense. I take back 22 percent of the things I’ve said about him this year.

• Jawun’s passing is exquisite to witness in person. He’s so in control of his body and hands at all times. It’s like the thing is on a yo-yo. He hits guys in stride on fast breaks, pumps no-look passes into the lane like Mason Rudolph in traffic and puts it where guys want it when they’re spotted up at the perimeter. A showman. Bring me another year of Jawun Evans. His 12 assists were a career high.

• OSU got to the bucket whenever it wanted to in the first half. Its off-ball movement is a borderline religious experience compared to the Ford era, and TCU simply doesn’t have the rim protectors WVU and Baylor roll out there. I thought OSU did a terrific job recognizing and taking advantage of that. I’m not sure that would have always been the case in previous years. They got 38 points in the paint on Wednesday.

• I would get endless GIFs out of Jamie Dixon if he was the coach in Stillwater. I mean, I kind of already did out of Travis Ford and do out of Brad Underwood (they’ve been blogging gold). But Dixon is one of the greats when it comes to yelling at refs. The facial expressions. The disbelief. The body contortions. Like if Tim Duncan was a Big 12 basketball coach.

One observation from being here live. Defensive intensity is insane. Closeouts and rotations have been strong.

• The first half was one of the cleanest halves of basketball I’ve seen all year. There were 11 total fouls and six total free throws taken. I was scared I was going to walk in on three tied-up Big 12 refs in the doldrums of the arena afterwards.

• I have to say this, Underwood would make me poo my compression shorts at least once throughout the season if I was playing. He’s always leaping, yelling, running, yelling, stomping or thrusting his fists his dudes. Sometimes randomly. I flinched from the media section a few times from 150 yards away. Great coach. Terrifying to play for.

• There were so few people at the game and the gym was so small that I think pretty much everybody made it onto the big screen at one point or another. The TCU student section is a student couple of rows.

• This extends OSU’s road win streak to four games, which is the team’s longest since the 2012-13 squad won five straight Big 12 road contests.

• Clip is to the point here he’s having super quiet 17-point games, and I love it. He was 6-13 from the field with seven boards. He’s become just automatic night in and night out in this league.

“It’s another dimension that we know we have, but it’s nice to have him going,” said Underwood after the game. “He’s been incredible in practice. We felt like coming in that he was going to get shots. Not only was he good offensively, but he was tremendous defensively.”

• Let’s chat about that last sequence. Averette (a freshman) got fouled and made two free throws to put OSU up one. Mitchell Solomon (!) got a swat under the hoop. And Jawun stuck a dagger in ’em. Underwood was asked, by the way, afterwards if he was trying to foul (he was) and he took full responsibility.

“That was on me,” said Underwood. “We practice that scenario. Under 10 I’m going to foul every time. I’ll take the hit for that one. Fortunately for us they didn’t make the shot.”

• This was a really even game. Both teams were 8-20 from three, had basically the same effective field goal percentage, offensive rebounding percentage and turnover rate. It came down to the end, and the fact that OSU has Jawun Evans and TCU does not.

• I liked OSU’s matchup zone they played on defense. TCU came in No. 200 in the country in three-point percentage. OSU dared them to hit shots (they did).

• OSU had a pretty large crowd in attendance given how many guys are from the Dallas area — I think dudes were jacked up to play, Leyton most of all maybe.

We love seeing all the ORANGE in Fort Worth tonight ???Pistols Firing! #GoPokes #okstate pic.twitter.com/mT6KpIVnNV

• Dillard finally had a bad game. He’s a human. He’s not an alien!

• TCU has NIT appearances painted on the top part of its gym. Sad.

"NIT Apperances." Makes me LOL every time I'm in this gym. #GoFrogs pic.twitter.com/QDnnGPZZpM