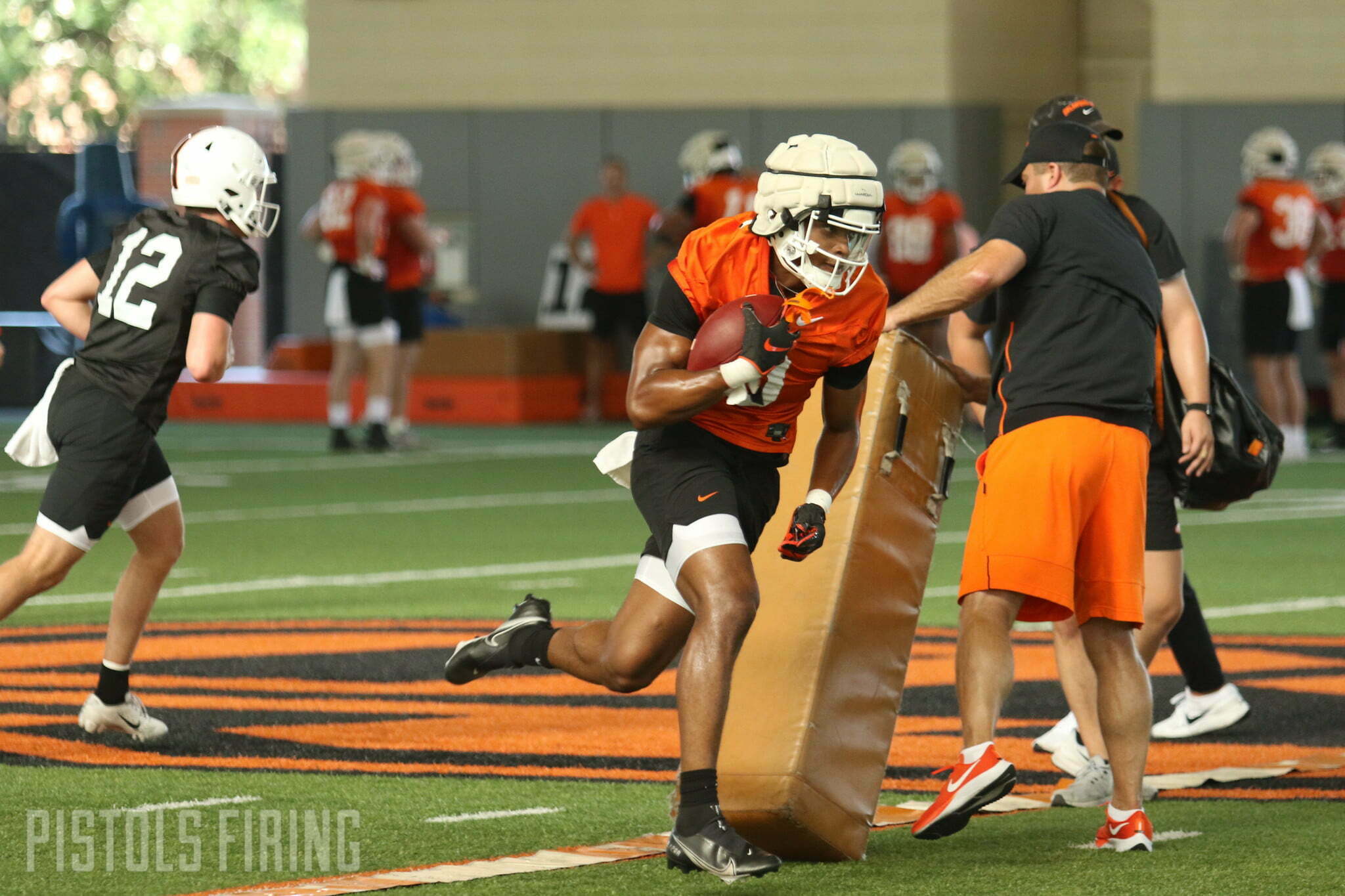 STILLWATER — Aside from being a sign that football is back, one of the most exciting parts of fall camp is watching newcomers prepare for their first season of college ball.

Oklahoma State started its fall camp Wednesday. Here is what some of the Cowboys’ elder statesmen said about the freshmen in their first fall practice as college football players.

Oliver Says to Watchout for the Timberwolves … and Ollie Gordon

Collin Oliver repped Edmond Santa Fe when asked who he thought could surprise some people this season.

Oliver, who attended the Edmond high school, was quick to mention Talyn and Tabry Shettron, a pair of freshmen at OSU who came from the same school. Oliver said there was a little bias there, but the third name he mentioned didn’t have any ties to him: running back Ollie Gordon.

“He’s yoked,” Oliver said. “He’s huge. Dude is huge, especially for his age. I wasn’t that big coming in here. He looks like me when I first came in here, and I’m a defensive end. He’s gonna be scary for sure.

“… Dudes who are gonna tackle him who we play against, it’s gonna be a real long day for them. That dude is gonna be cold.”

A four-star prospect, Gordon was the No. 238 player in the 2022 class, making him the second-highest ranked signee in OSU’s class behind Talyn Shettron. Listed at 6-foot-1, 211 pounds (which both seem low), Gordon stands out among OSU’s running backs because he towers over them.

Talyn Shettron is getting votes of confidence from more than just his high school teammates, though.

Shettron, a wide receiver and the No. 126 prospect in the 2022 class, is in his first fall camp. Like Gordon, Shettron enrolled early to go through spring ball. And through the summer and into the start of fall camp, the 6-foot-2, 195-pound Shettron has apparently continued to impress.

“He’s a great player, and he’s only gonna get better,” John Paul Richardson said. “He’s a strong kid, I’ll tell you that. He’s worked his tail off on the weight room. He doesn’t say too much, and he works his tail off. So, I expect a great year out of him, as well. We’re excited for him.”

Without Jarrick Bernard-Converse and Christian Holmes, Oklahoma State’s cornerback room will have a new look to it in 2022, a group that Jabbar Muhammad and Korie Black are set to lead.

Size-wise, corners coach Tim Duffie has a big group with only four of the 11 corners on the Cowboys’ fall camp roster coming being listed under 6-foot. OSU has two true freshmen corners in D.J. McKinney (6-foot) and Cameron Epps (6-foot-3).

McKinney has turned a few heads since enrolling early, whereas Epps, who didn’t enroll early, enters his college career as a four-star recruit, according to Rivals.

Then there is De’kelvion Beamon (6-foot). Beamon should be a true freshman, but he reclassified into the 2021 class and spent last season with the Cowboys. And you can tell Beamon has spent a year with Rob Glass.

“… [Epps] learning the playbook really fast. He asks questions. He’s one of the first ones in there. I expect some big things from him, too.”