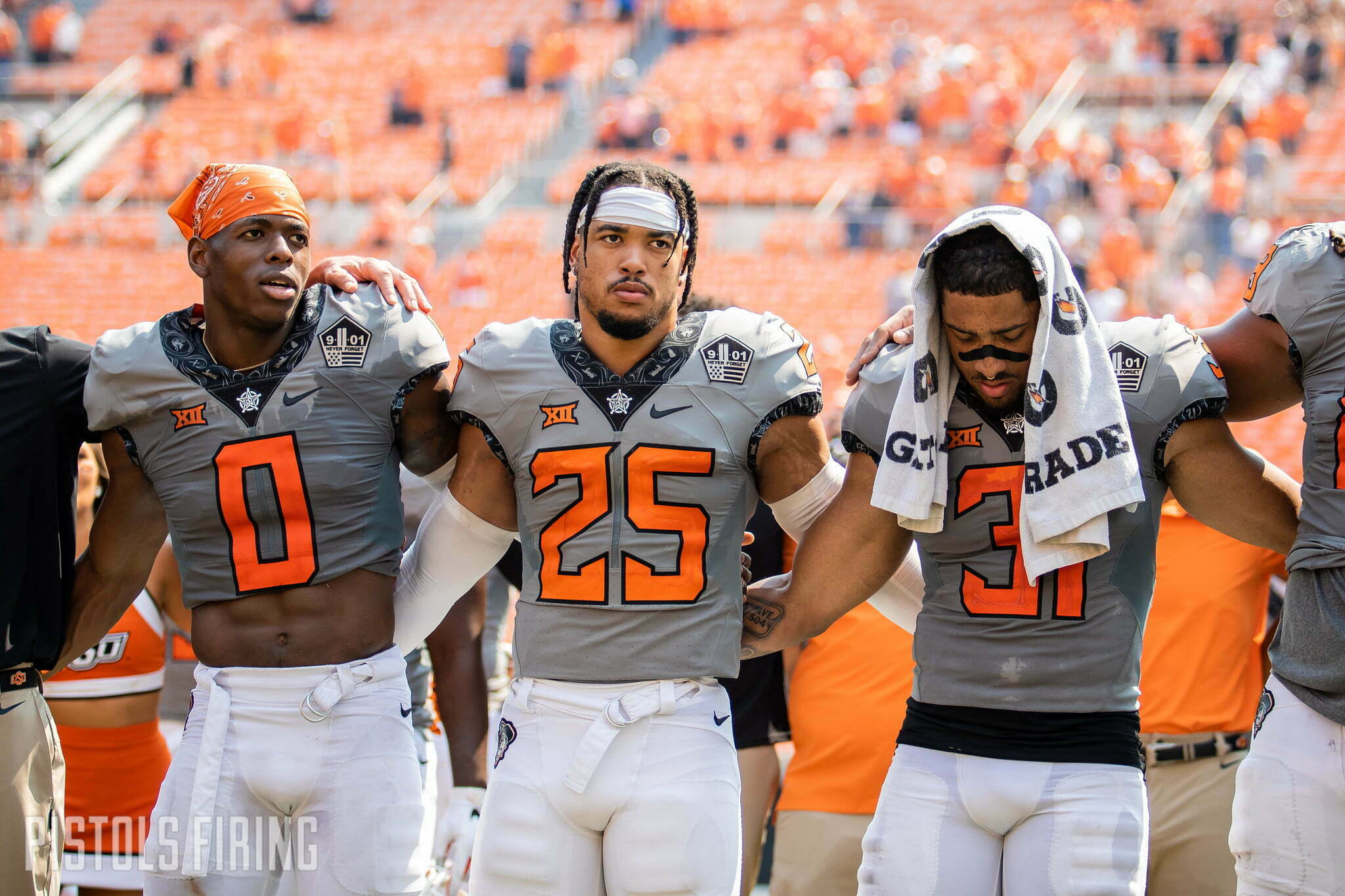 STILLWATER — The Cowboys’ first road test of the season will be a tough one at Boise State this weekend.

Oklahoma State players met with reporters on Tuesday afternoon. Here are some of the things they hit on.

Kolby Harvell-Peel stepped to the podium Tuesday wearing a No. 2 practice jersey instead of his No. 31.

The jersey belonged to Harvell-Peel’s position mate Tanner McCalister. It wasn’t just Harvell-Peel messing around. He said he was hoping wearing it would help him play like McCalister.

“One of my points of emphasis in the offseason was man coverage, and I don’t know if y’all know, Tanner McCalister is really good in man coverage,” Harvell-Peel said. “I figured if I steal his jersey, maybe I could steal some of his energy moving forward.

“I just stole it. I don’t know what he was running around with today, but it wasn’t this bad boy. … I feel a lot better in it — slimmer, feel lighter.”

Through two games, Harvell-Peel is second on the team in total tackles with 14. He has 0.5 tackles for loss and a pass breakup to his name. Whether it’s the jersey or the work he put in this offseason, it seems to be working.

“In combination with the jersey, just working on (man coverage) in the offseason, we got so many good receivers on the offensive side of the ball that we go against every day just playing man in practice,” Harvell-Peel said. “I feel like it’s paid dividends.”

Redshirt junior safety Jason Taylor started in Tre Sterling’s spot against Tulsa after Sterling had to miss the first half because of a targeting call against Missouri State. It didn’t take Taylor long to make an impact.

He picked off a Davis Brin pass on the first possession of the game and returned it for a would-be score. However, there was a defensive holding call on the play, nullifying Taylor’s first career INT.

Taylor has had a knack for finding the end zone in limited snaps the past two seasons. He scored twice last season. He had an 85-yard fumble return for an eventual game-winning touchdown against Kansas State. Two games later, he returned a “surprise” onside kick for a score against Texas Tech for another touchdown.

“When we came in, you could just see how talented he was,” Harvell-Peel said. “He’s big. He can run. He’s got great ball skills. It was just a matter of time for him to actually show it. … Saturday he got to show that he’s a great safety, and hopefully moving forward, even though Tre’s back, he still rotates in and we can show all of the talent that we do got on the back end.”

Out of Carl Albert High School, Taylor was a three-star prospect in the Cowboys’ 2018 class, the same class that brought the Cowboys Harvell-Peel and McCalister. He has 29 total tackles in his career thus far, wracking up a career-high eight against Texas A&M in the Texas Bowl a few years back.

With how deep the Cowboys are in the secondary, Saturday’s game was just his second career start. But just because he isn’t starting, doesn’t mean Taylor isn’t producing.

“He’s a starter if he goes to 90% of the schools in the country,” Harvell-Peel said. “I’ve said for a while that we’ve got a great back end, and we’re deep in the back end. Although maybe y’all haven’t seen it, we see it every day.”

Birmingham on His Move from RG to LT

Cole Birmingham was listed as the second-string right guard on OSU’s first depth chart of the season. An injury to Hunter Woodard saw him start the Missouri State game at the spot, but Charlie Dickey moved Birmingham to OSU’s starting left tackle between weeks one and two.

“It’s not too much difference going from right to left,” Birmingham said. “Leveraging is a little different. It’s not too bad.”

The offensive line has taken criticism this season, as the Cowboys are averaging just 2.7 yards a carry and 97 yards a game through two games, but Birmingham said the group hasn’t stopped working.