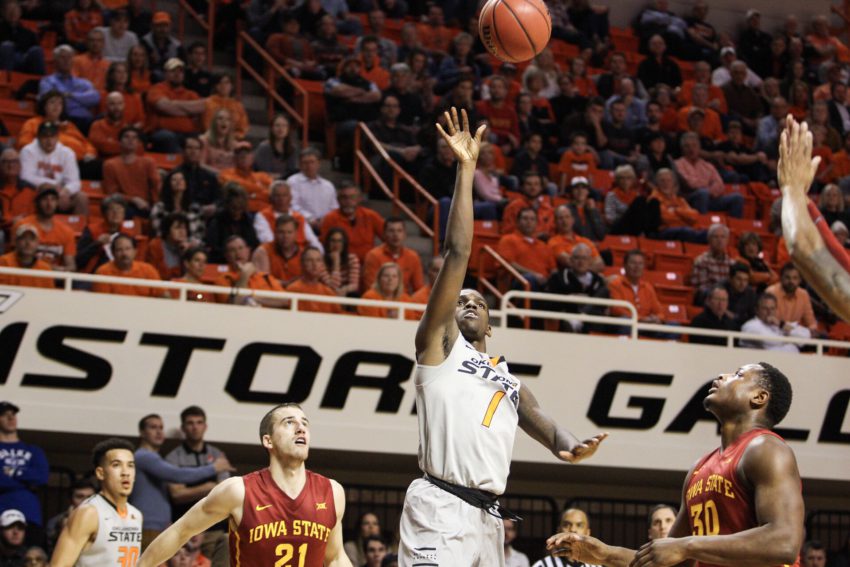 Oklahoma State got run out of the game late against Iowa State on Wednesday evening to fall to 0-4 to start the 2016-17 Big 12 Conference season. The Cowboys played pretty well on offense (save the 19 percent of possessions they turned it over on) but were poor on the defensive end.

As a result, Iowa State posted an effective field goal percentage of 60 percent and took five more shots (and it was a lot more than that before OSU started fouling at the end) than the Pokes (because they turned it over six fewer times). Here’s my notebook on tonight’s game.

• Jawun Evans picking up two fouls before the first media timeout is a problematic trend. It would be like me drinking two COOP beers before writing the Bullets. You can do it, but it’s probably not going to go all that well.

• Speaking of Evans, when they brought him back in during the first half with those two fouls, Iowa State knew he couldn’t play defense and went right at him over and over again. Kudos to him for not picking up No. 3.

• Statement lineup form Coach Underwood tonight. This was (probably) always coming because Underwood wants to play five athletes, but it was still a little surprising to see in reality.

• Not game related, but these are amazing.

#okstate needs to do this. https://t.co/uwG9MciHwW

• Where do I bet on whether Davon Dillard will finish his career at Oklahoma State and what kind of odds can I get on such a thing?

• Things that currently infuriate me, ranked:

• Speaking of Solomon — he was pretty good on Wednesday. Six points, six boards and looked engaged for the most part. He still takes the ball up too softly and doesn’t need to be guarding Monte Morris in crunch time, but still, there was progress.

• The first half of this game was the first time this season I’ve been legit bummed out about the trajectory of this team. OSU was down 10-11 at one point, and the whole thing just felt hopeless. Then somehow OSU snagged the lead before the end of the half.

• A note on off-the-ball fouls to college refs: There better be a certified assault for you to call that. I don’t need games bogged down because Iowa State’s backup power forward tugged on Leyton Hammonds’ jersey for 0.42 seconds.

• While we’re talking about officiating, I also love the no-call on the defender going straight up under the rim and getting the offensive player with body but not hands. Don’t call that trash.

Jawun has some Kyrie in him. https://t.co/KYYhGkH3yz

• Speaking of shooting: OSU was 18/27 in the first half and 16/27 in the second. You can’t expect them to shoot 67 percent all game which is why you have to have the defense turn Iowa State over more than 12 percent of the time.

• Why doesn’t OSU run an offense? Is that a fair question? It was one of the things I was most excited about coming into the yearm and I feel like it has been nonexistent. At least they move the ball better than the last decade.

• Forte carries it every time.

• Is, uh … I can’t believe I’m saying this but … is Jeffrey Carroll our best player?

• This was Forte’s 22nd career 20-point performance, which ties Marcus Smart and Richard Dumas for the 12th most in OSU history.

• This was a really fun game. Most Big 12 games are until the officials start thinking fans paid to seem the blow into a small black instrument with a hole in it. This is not a musical, Big 12 refs.

• I was impressed OSU didn’t get too down after that rough start. They showed good resilience but couldn’t close. Sometimes I wonder if Jawun gets a little too hero-y at the end. Like, I want him to take over, but not at the expense of getting the other weapons involved. Tough line to toe.

• Naz Long is on the Perry Ellis graduation program.

• OSU’s defense was so weak at the end of the game. They have to be better than that. Their calling card is (or should be) creating turnovers and locking teams down on the perimeter. I saw none of that on Wednesday evening.

• Every player in both starting lineups in double figures except Hammonds (who had 8 points).

Monte Morris was much better than Jawun Evans tonight. No 2ways about it #ISUvsOSU

• At least OSU shot free throws well on Wednesday. Went 11/13 from the line.

• This was a blowout by OSU-ISU standards. The last 10 games before this were decided by an average of 4.3 points.

• Iowa State has won eight in a row against Oklahoma State, and OSU has lost 11 Big 12 games in a row overall.