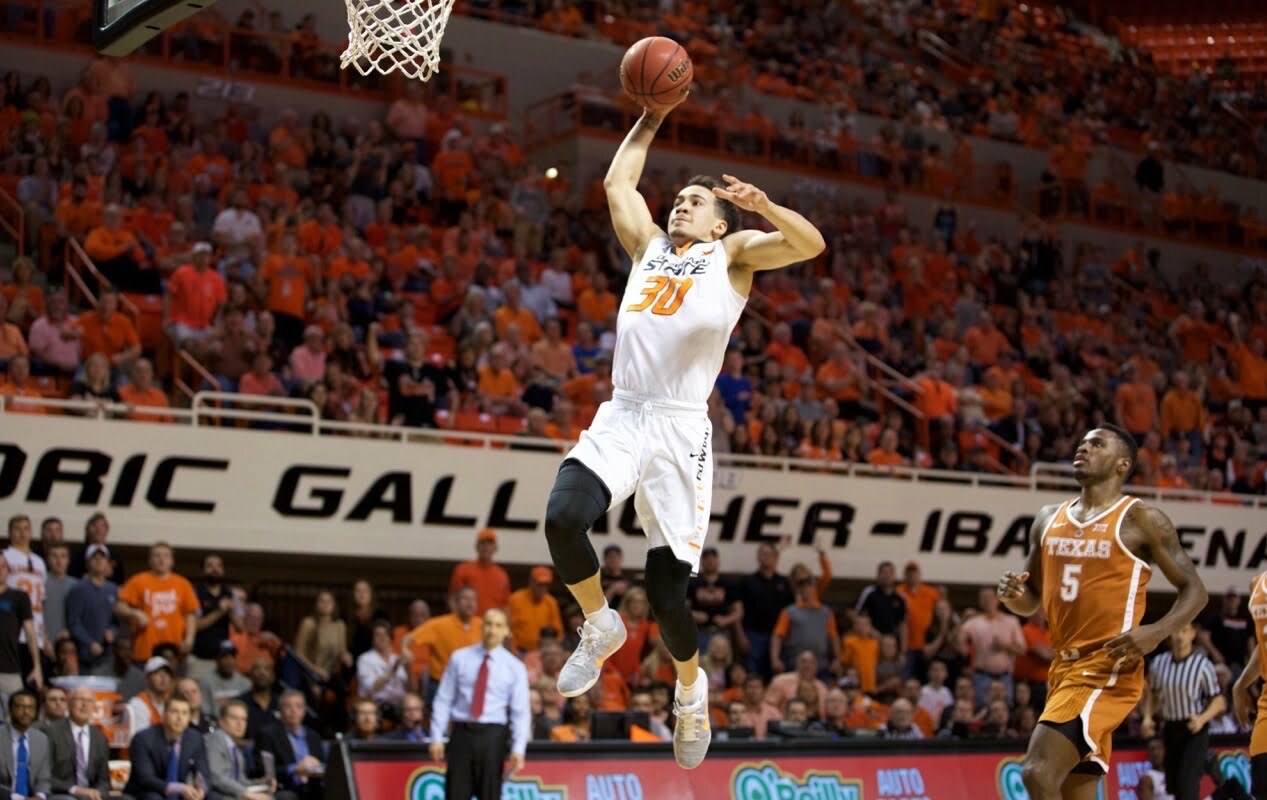 Oklahoma State thwarted Texas 84-71 on Saturday in a game it had to win to keep its NCAA Tournament chances alive (you lose twice to this Texas team and it might be game, blouses). The Horns moved to 0-11 on the road and OSU took its sicth win in seven games after a six-game losing streak.

Here are my notes from Saturday.

• I don’t like Jawun in sleeves. In general I’m a sleeves fan, but I didn’t think he looked that great. Wonder what he’s hiding under there. ?

• OSU is a different team if it has a big that can hit shots at the elbow. Just blows the offense wide open. Also it’s feast or famine from there. Solomon either looks like a 10-year All-Star burying a shot or he throws it off the backboard.

• Name me a better player going from under the opposing team’s goal to the other end and getting himself a layup than Jawun Evans. Go ahead. I’ll wait. Case in point.

• Entry passes to OSU’s big men are like drinking coffee after 6 p.m. You can do it, but you’re probably going to pay the price shortly thereafter.

• OSU has had Davon Dillard guard Johnathan Motley and Jarrett Allen in consecutive games. Seems like a poor idea! Those two have combined to shoot 18-25 from the field, score 42 points and grab 21 boards.

• I love Forte’s Kobe stepback. He has to work about 293x harder than Kobe had to work for it, but it’s still pretty. He’s been a hell of a time in Big 12 play. After a slow start to the season, I’ve been reminded of why we’ll miss him.

• How fitting is it that, on the day KD returns to OKC, Oklahoma State beats his alma mater in one of the few gyms that has never seen a KD win in his life?

• Texas is a tremendous defensive rebounding team, but OSU held its own on the offensive glass, grabbing 33 percent of available boards.

• The whole 18 assists on 34 made buckets is fun. This team seems like it genuinely enjoys passing the ball to each other which, uh, has not been a pillar of Oklahoma State basketball in the last few years.

• Bring me more of these 11-point, 4-rebound lines with 3-3 from three-point range lines from Leyton Hammonds.

• Can we eliminate the circled region below and maybe move it back to the three-point line? (and yes, I know what it looks like). • OSU didn’t panic in the first half when it got down early (even though I panicked a little bit in my head). They just played faster, pressured more and went on a 20-2 run. #coaching #trust #undieball

• I honestly did not know 3 seconds in the lane was still a thing. I think this game was the first time I’ve seen it all year.

• One difference in this year’s team vs. the last few is that this year when OSU takes a dumb three with two seconds on the shot clock, I’m actually surprised.

• Dez live-tweeted most of the game which was amazing.

• It felt like Texas got a little tired and lazy on defense in the second half, and OSU took advantage by making the extra extra pass. It was a delight (unless you root for Texas).

• I love imagining what’s banging around in Dillard’s head when he catches a pass at the three-point line. I shouldn’t … I really shouldn’t … passes … gets it back … I’M DAVON DILLARD MAN AND I JUST DO NOT CARE ANYMORE. [launches three]

• My favorite part of the Dillard dunk, by the way, was Forte running towards the locker room like he had to go pee pee. What a joy this team is right now

• Texas sort of reminds me of a middle class man’s Baylor. Big, athletic dudes and good guards, but everybody is about a standard deviation worse than the Bears.

• The “Kan-sas-foot-ball!” chant was cold-blooded, guys. I loved it.

• Mitchell Solomon always looks like he’s in the middle of a Vince Carter-like move at the rim (alley oops, one-handed dunks etc.) and … he never is. It always ends awkwardly.

• I loved that OSU didn’t mail it in when they got up 18 in the second half. They kept playing like they had a treadmill waiting the other side of their second-half effort (which they probably did).

• Sometimes I record the games on my computer. I used to end them early during blowouts. I don’t anymore just in case Davon Davons.

• Texas was 9-18 from the free throw line. Awaken the charity stripe, Shaka!

• Texas was 4-23 on three-pointers. I don’t think awakening the space is the issue!

• TCU on Wednesday is big (they’re all big). Hopefully Lindy Waters, who was out with a sore foot, will be back for that one.