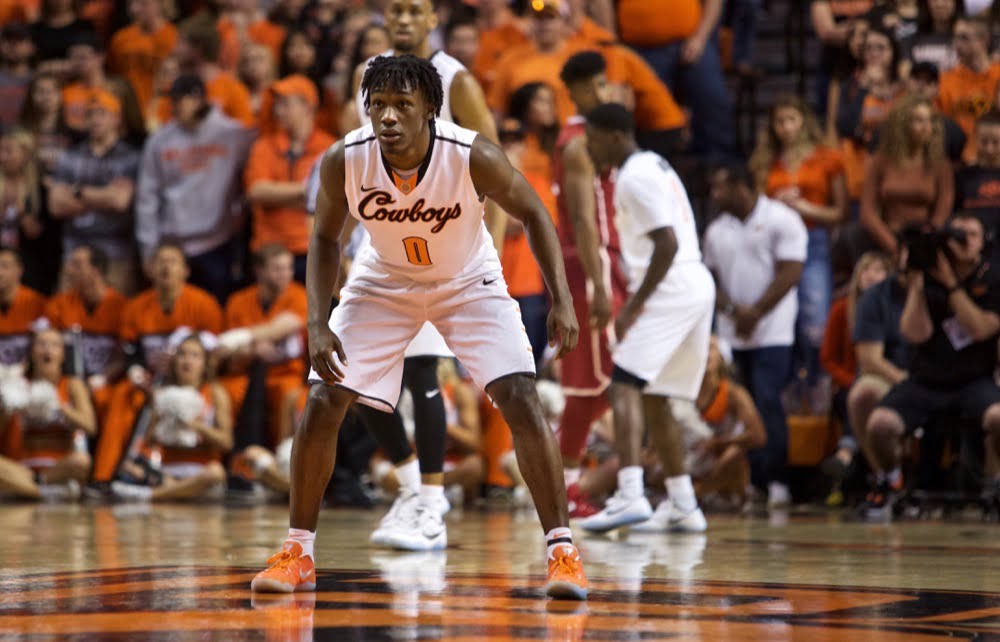 It was everything the first Bedlam game this year was not.

Both teams hit loads of shots, each more preposterous than the last. The teams combined to make 62 of 118 shots and 42-54 free throws. It felt more like a NBA game than a Big 12 war. And the flow in the second half was Sweet 16ish. Whoo, that was fun.

OSU closed breathtakingly after trailing for most of the evening with an assist from an arena hasn’t rumbled like that in many moons. Here are my notes from Saturday night.

• I actually like OSU trapping at half court with Jordan Woodard out of the game. I thought that was smart. I like how Underwood adapts to who he’s playing. It went badly, but we all complained when OSU didn’t do it against Baylor. I was in favor.

• The Dillard block in the first half was spectacular. It didn’t get a ton of love because it felt like the first half went by in about three minutes, but I’m here for Davon swats into the second row and standing over OU players during Bedlam. I want it all.

• Marcus Smart sitting in the mid-court seats was terrific. Of all the things that dude could be doing during the All-Star Break and he’s back in Stillwater for Bedlam. That’s awesome.

• Busting out the cursive Cowboys unis for Bedlam is perfect. There are zero reasons not to just burn the rest of ’em and roll with those the rest of the year until you get a new template.

• I like how announcers act like Underwood cured prostate cancer with his defensive switch in the middle of the year. Are college basketball coaches that obstinate that they don’t normally make simple switches like that? Like, it was a great move, but we’ve been talking about it for six weeks now!

• OSU’s defense in the first half was poor. The second half deefense was terrific. OU just shot out of their minds in the second half. Coming in they didn’t have a single Big 12 game this year in which they’d shot over 52 percent. They were at 60 for most of the game and finished at 55 including 48 percent from 3-point range.

• Speaking of that, this felt like the 2014 Bedlam football game, didn’t it? OU had a bunch of freshmen and sophomores running around with no clue what they were doing. OSU has a good not great team that seemed stunned by it all. Thankfully OSU didn’t re-punt with under a minute left.

I want to love anything someday as much as this guy loves Forte 3s. pic.twitter.com/ZRMJrGK9hZ

• It is difficult for me to express how much I love the screen at the top of the key with the guard rolling round the edge where he can either pull up, drive to the bucket or hit a rim-rolling big. Three plays wrapped up in a simple high screen. And it works!

• Jawun legitimately looks like he’s been shot out of a cannon in the open court sometimes. He had one play with Averette where I thought my feed had paused and sped up to catch back up with real time. Nope, just Jawun.

• OSU turned OU over on 20 percent of its possessions. It was the only way it could have won the game with OU shooting like a Ray Allen-Steph Curry love child in its peak prime.

• Jawun only had one turnover. One.

• OSU hit 22-28 from the line. That was yuuuge. They are No. 11 in the country in free throw percentage. In the Big 12, every single little thing you do well matters.

• Jeffrey Carroll was tremendous again. His shot is a close second to Lindy Waters’ in my book as prettiest on the team. When it’s going from deep, he’s a monster.

People up to the 300s stay for the alma mater. #goosebumps #okstate pic.twitter.com/AYPJWkUpw8

• It felt like OSU shot itself out of it a little bit in the first half. Like they were trying to set a 3-point attempts record. They ran their actual offense way better in the second half, and I think it helped them hit non-forced 3s. They still shot 30 of them — a season high — but the ones in the final 20 minutes were more of the type of 3s they should be shooting. To wit, they were 7-19 in the first half and 5-11 in the second.

• GIA mattered on Saturday night. It felt like if OSU could get it to within a couple at the four-minute timeout in the second half, GIA might be able to shut it down. They did and it smothered the Sooners. OU scored just two points in the final 4:55 after scoring 90 in the first 35:05. It’s fine for freshmen and sophomores to run around and not know what they’re doing, but when the chips are down and GIA is roaring, she’s a hell of a dragon to slay. They weren’t ready for it. They got lost trying to get home at the end. Such is life as an underclassman.

• Dilard has a little too much “I want to dunk on you and your entire family tree” in him right now. I get it. I don’t begrudge him for it. I’d do the same. But it cost OSU a couple of times on Saturday. Of course he also had five boards that felt like 15 and was a monster on the interior for the oversized Pokes.

• The 53 first-half points are the most OSU has allowed all year in a first half.

• Will they? They did at the very end, but it was dicey up until then. Outcomes shouldn’t affect decision-making, of course, but like I said above, I was in favor of the pressure. Also, I’m with Nate in that I thought it was over on the banked-in 3-pointer to make it 80-69 with just under 10 minutes left.

That's about the worst defensive half of basketball you can play. Why is OSU pressing? OU will beat themselves if you stay home

• A collection of Yelling Guyisms (we need to have him on a pod!)

Yelling Guy just wearing out the official: "YOU'RE A WANNABE!"

Yelling Guy is now coaching the team: "Play some defense….WITH YOUR FEET!!!!"

• Solomon had 6 points, 7 boards, 2 blocks, 2 steals and 2 assists on one shot. Also only had three fouls. The perfect Solomon game. Also, OKC Dave coined the perfect nickname for him: King Solomon (to be fair, I’m not sure OKC Dave came up with this, but he used it, and it is perfect).

The OU Fan sitting next to me just gave the #okstate wrestlers a standing ovation … deservedly so. #Bedlam

• This game ended OU’s three-game win streak in GIA. The Cowboys last beat the Sooners in Stillwater on Feb. 16, 2013, when Marcus Smart’s 28 points helped the Cowboys take down OU, 84-79, in overtime.