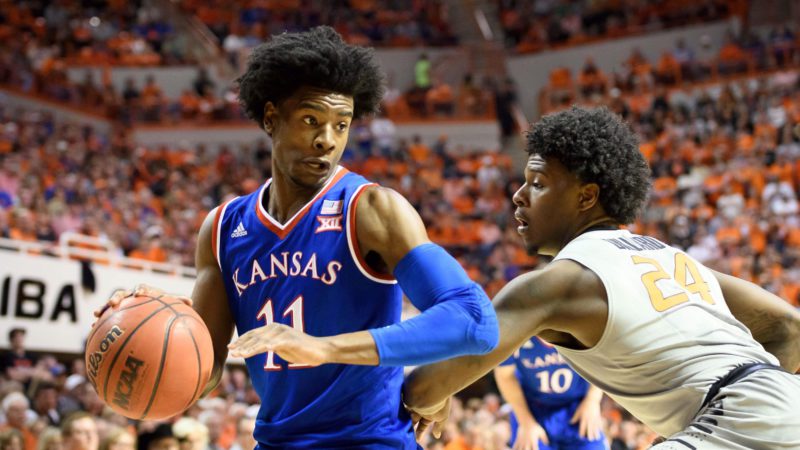 Bill Self got his first win at his alma mater in his last four tries as the Jayhawks held on despite career games from Jawun Evans and Jeffrey Carroll.

Let’s jump into the notebook.

• The best two offenses in the Big 12 faced off in Stillwater on Saturday. The Cowboys were back to No. 1 in KenPom’s adjusted offensive efficiency rankings (125.0). They’ve been jockeying with UCLA for No. 1 over the last couple of weeks. But Kansas is no slouch on offense. The Jayhawks came in ranked fifth at 120.9 points per 100 possessions.

• This is just the fourth time since 1949-50 that Oklahoma State has hosted the nation’s top-ranked team. All four times, the Cowboys were unranked.

• The crowd-y was rockin’. You see what I did there? This was the fourth sellout this season at GIA. The last time OSU had that many was 2006-07.

• T. Boone was in the house and got to spend time with his favorite QB. I wonder if Mason Rudolph is some sort of emissary between Boone and Gundy.

#okstate has made 24 FGs tonight. Jawun Evans has assists on 13 of them. Insane.

• Evans finished 7-of-18 (1-of-6 from 3) but was fantastic in spite of his shooting woes. 22 points and a career-high 15 assists and he was clutch making all seven free throws.

And this seems pretty good.

• From the tip, it felt like KU was ready to take off at any time. They would build a 6-point or 7-point lead and OSU would come back. It felt like any bigger deficit would be a hole OSU did not need to find itself in.

• After going down 12 in the last first half, OSU finished with a 10-1 run and cut it to 3. It was more of the same in the second half. Each time KU looked like they would blow things open, Jawun made a play or hit a big shot.

• If Frank Mason III is the best point guard in the NCAA — I think he his — can you imagine what Jawun Evans would look like if he plays for four years in Stillwater? I don’t know if he will. I don’t know if he’s back next year.

• Phil Forte had a rough start to his senior night. He missed his first three 3’s and had a couple of silly turnovers in the first half. But then #Philwater lit it up in the second half (4-7 and 3-of-5 from 3). He is a treasure for OSU fans and will be a fan favorite for a long time.

• Leyton Hammonds ended his GIA career with a really solid 24 minutes. 10 points on eight shots and three rebounds. His growth this year has been outstanding and he’s proven plenty wrong.

• The unfortunate thing about going down to the wire with the No. 1 team in the nation is that Brad Underwood didn’t get to sub Forte and Hammonds out for a standing ovation during the game.

• Before Jawun Evans’ three-shot trip to the charity stripe with 1:54 left in the first half, OSU had only attempted two free throws to KU’s 11. Things evened up. OSU went 13-of-14 with the Jayhawks making 13 of 17. Jawun Evans and Phil Forte are on streaks of 29 and 20 straight makes, respectively.

• The ESPN crew had senior Bracketologist Joe Lunardi on in the first half. He said a Kansas win would keep OSU at a 6-seed in his book and a loss might drop them but no lower than 7. He did say the results of the Big 12 tournament would still factor in.

• This may not be a popular observation but I thought the refs did an okay job trying to stay in front of this game. There were some ticky-tack calls but they called it both ways for the most part. The foul count was virtually even most of the game. At one point, KU had 6 to OSU’s 9 but the Jayhawks were whistled for two-straight. 16-15 is a lot better than 45-14.

• Losses suck and OSU misses on the their last two regular season games. But there’s no shame in losing to No. 1 or succumbing to Hilton Magic. 20-11 and 9-9 in conference was only made possible by a stellar turnaround. And the best part is that it’s not over, folks. OSU can still make some noise in Kansas City to try and improve their already solid seeding.

Regular season sign-off note: OSU basketball is fun again. GIA is rowdy again. Let’s enjoy it and get ready for a fun rest of March.