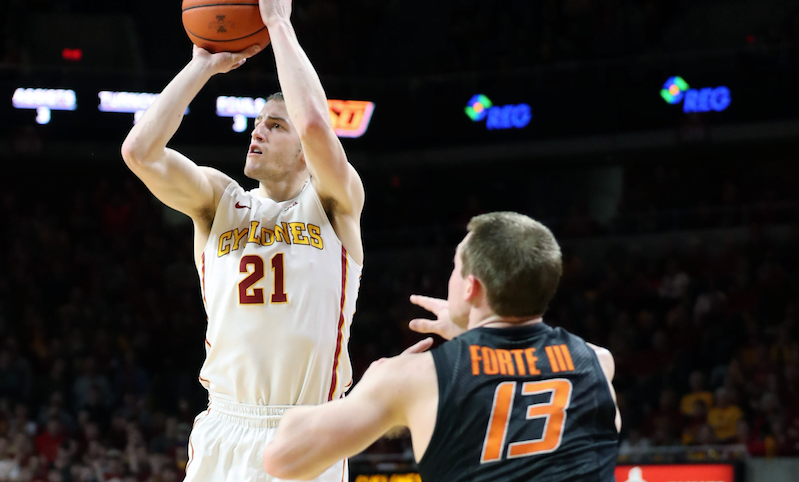 On a senior Tuesday night full of #HiltonMagic, Oklahoma State was swept by Iowa State — just the second Big 12 team to do so this season.  Both teams came into Tuesday night riding a five-game winning streak. Iowa State got the win at home to push its to six. The Cowboys move to 20-10 and 9-8 in Big 12 play.

Let’s jump into the notebook.

• Oklahoma State came in at No. 19 per KenPom, but Iowa State was right behind them at No. 23. The Cowboys were second in adjusted offensive efficiency (125.3 points per 100 possessions) and the Cyclones were 18th at 118.3.

• Oklahoma State out-rebounded Iowa State by 13 (40-27) and grabbed four more offensive rebounds (9-5). Unfortunately, due to six more turnovers (13-7), OSU and ISU both took the same amount of shots from the field (59).

• The Cowboys’ offense looked pretty stagnant for long stretches in the second half. The shots they did make early were forced or were tough shots that they made because of talent, in spite of execution.

• The Cyclones are now 7-2 at home in Big 12 play and 12-3 overall inside Hilton Coliseum this season.

• Iowa State has won the last nine meetings against OSU by an average of 7 points.  Tonight’s win brings the Cyclones within one game of .500 in the series all-time at 62-63.

• Iowa State is the most experienced team in the Big 12 (sixth nationally) per KenPom. Four starters took part in the senior night festivities on Tuesday — Monte Morris, Nazareth Mitrou-Morris, Matt Thomas, and Deonte Burton. OSU is No. 249 in that category.

• Speaking of youth, once again Lindy Waters rode the bench with a nagging foot injury. He looked a bit gimpy in this pregame video. Let’s hope he can get healthy for March, because I think they could use him.

One team. One family. #okstate

• OSU’s first free throw attempt (by Brandon Averette) was a miss, breaking a streak of 35-straight makes from the stripe. They ended up 12-for-14 but were below their league-best average in attempts (24.9).

• Leyton Hammonds had a big first half with 11 points on 4-of-5 (3-for-3 from 3) and led all Cowboys at the break. He scored five points late in the second half but I think they should have gone to him more earlier.

• Iowa State does not turnover the ball. They are No. 2 in turnover percentage at 14.1 percent. OSU is 31st in the country, forcing 21.4 percent. Conversely, OSU turns the ball over at a clip of 19 percent (good for 200th nationally) and the Cyclones force TOs on 20.8 percent (49th). In Stillwater, ISU won the turnover battle 10-16. It was the same story in Ames. OSU coughed up 13 TOs to the Cyclones’ seven. ISU only had three giveaways in the second half.

• The Cowboys are the ninth-best 3-point shooting team in the nation this season, pouring it in from deep at a 40.5 percent. Iowa State comes in a hair under, shooting 39.4 percent (No. 22). Tonight the percentages were pretty even but Iowa State made all the timely 3’s down the stretch.

• It seemed to go off the rails when Iowa State was on a mini run and Brad Underwood got a technical foul for arguing a questionable Davon Dillard foul. Then Matt Thomas made a career-high seventh 3-pointer. OSU coughed up a couple turnovers and before you knew it, the Cyclones rattled off 8-straight points and the Cowboys were playing catchup the rest of the way.

More on the Undie T…

Make a bad call, call a T when coach points out the bad call #Big12Refs #osuvsisu

• So Davon Dillard and Jeffrey Carroll both got called for pretty bogus “over-the-back” calls.

Attention @Big12Refs: jumping higher than someone else is not a foul. #okstate #iowastate

• With all the second-half woes the Cowboys displayed, Jawun Evans was still doing Jawun things and used his own 8-0 run to turn it right back into a nail-biter.

Unfortunately, at the worst possible time, this happened.

The Cowboys host their senior night for Phil Forte and Leyton Hammonds against the No. 1 team in the country. And KU’s lost three-straight at Gallagher-Iba.