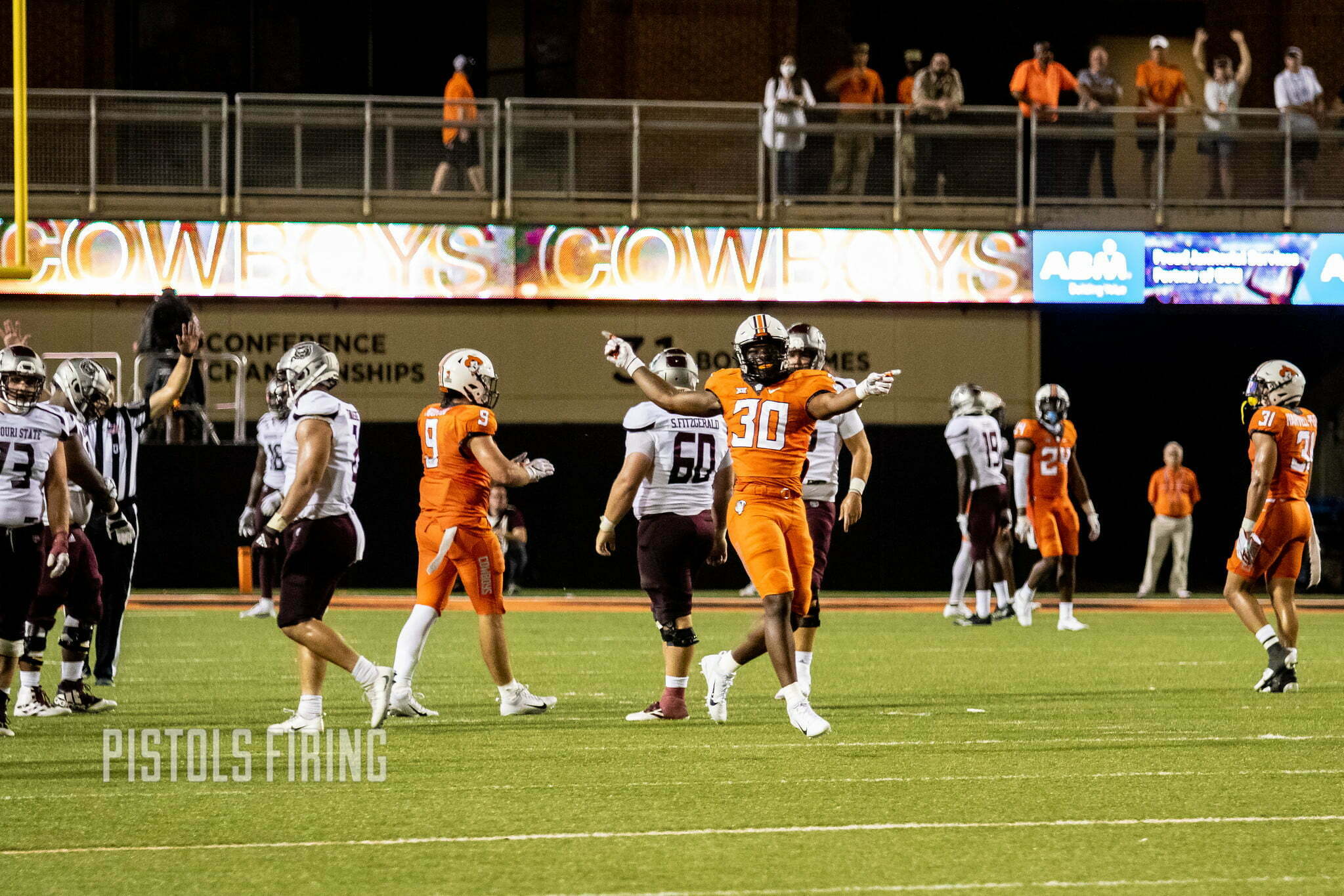 STILLWATER — After a closer-than-expected start to the 2021 season, the Cowboys got back to work this week.

A few Oklahoma State players met with the media Tuesday (you can watch the interviews here). Here are some of the topics they discussed.

With Trace Ford out for the season, another former Edmond Santa Fe standout is going to be thrust into playing time: Collin Oliver.

Oliver played a good number of snaps Saturday in his first game as a college football player. His biggest moment came with under a minute to play. Oliver and sophomore corner Jabbar Muhammad combined for a sack with the game on the line.

His play from spring practices until that sack hasn’t gone unnoticed by some of the older guys on the team. Sixth-year senior linebacker Devin Harper said Oliver reminds him of the other former Edmond Santa Fe pass rushers.

“He’s strong, athletic, I mean, he’s already big, quick,” Harper said. “He’s just a grinder to be honest. … He reminds me of a mixture of (Ford) and Calvin (Bundage), to be honest. That’s a good little mix.”

Oliver came to Stillwater as a highly touted prospect. A four-star recruit, Oliver was a Top 400 guy in his recruiting class. This summer, OSU coach Mike Gundy praised Oliver but said he wasn’t sure how much he would play. In fall camp, Gundy updated that, saying Oliver would be in the gameplan. Now with Ford’s injury, look for Oliver to become an even bigger piece to it.

“He showed why he’s gonna be playing a lot this season,” senior safety Tanner McCalister said. “He was flying around, making plays. When you first come in, you start with the threes, he bumped his way up to rotating with the ones. … I think he’s gonna eventually be a really good player, and I think this year he might make some sparks and turn some heads this season.”

‘We Need To Be Better’

The Cowboys struggled to run the ball against the FCS Bears last week, and run blocking has become one of the biggest storylines surrounding the team entering the Pokes’ game against Tulsa.

The Cowboys rushed for 54 yards on 28 attempts. LD Brown, Jaylen Warren and Dezmon Jackson combined for 24 carries for 57 yards (the Cowboys lost yards elsewhere), two touchdowns and a lost fumble. It wasn’t how the four-headed backfield of those three and Dominic Richardson was supposed to start its season.

“I’d say we need to be better,” Springfield said. “We put too much work in for that. I’m proud of everyone. They worked hard. We came back today. We watched film. We put in a good practice. We’re working hard.”

Jason Taylor, Thomas Harper to Cover for Tre Sterling in First Half

The Cowboys will be without star safety Tre Sterling for the first half of their game against the Golden Hurricane.

Sterling was ejected from Saturday’s game against Missouri State on a targeting call that saw the senior defending his goal line.

Sterling had 74 tackles last season. That led OSU’s defensive backs with the Kolby Harvell-Peel coming second with 44. Sterling had six tackles Saturday, the fifth most on the team.

In his place, expect redshirt junior Jason Taylor and junior Thomas Harper to fill in during the first half. Taylor played in 11 games last season with his most notable performance coming against Kansas State. He returned a fumble 85 yards for a touchdown, preserving a tight lead in a game OSU would go onto win 20-18.

Harper has been highly praised since arriving to campus, but he has started just one game to this point. He had 31 tackles last season, 27 of which he made solo.

“Jason’s probably going to play behind him, and I believe Thomas Harper, he’ll probably play, as well,” McCalister said. “Losing Tre obviously is big because Tre Sterling, he’s a great player for us, but we got guys who are ready to step up like Jason Taylor, who got a lot of playing time last game. He did pretty good while he was in there. I think first half, we’re going to have to make some adjustments. Maybe I’ll play in the boundary a little bit, maybe Kolby will play in the middle a little bit, but other than that, we’ll just wait until the second half and get Tre back in the rotation.”