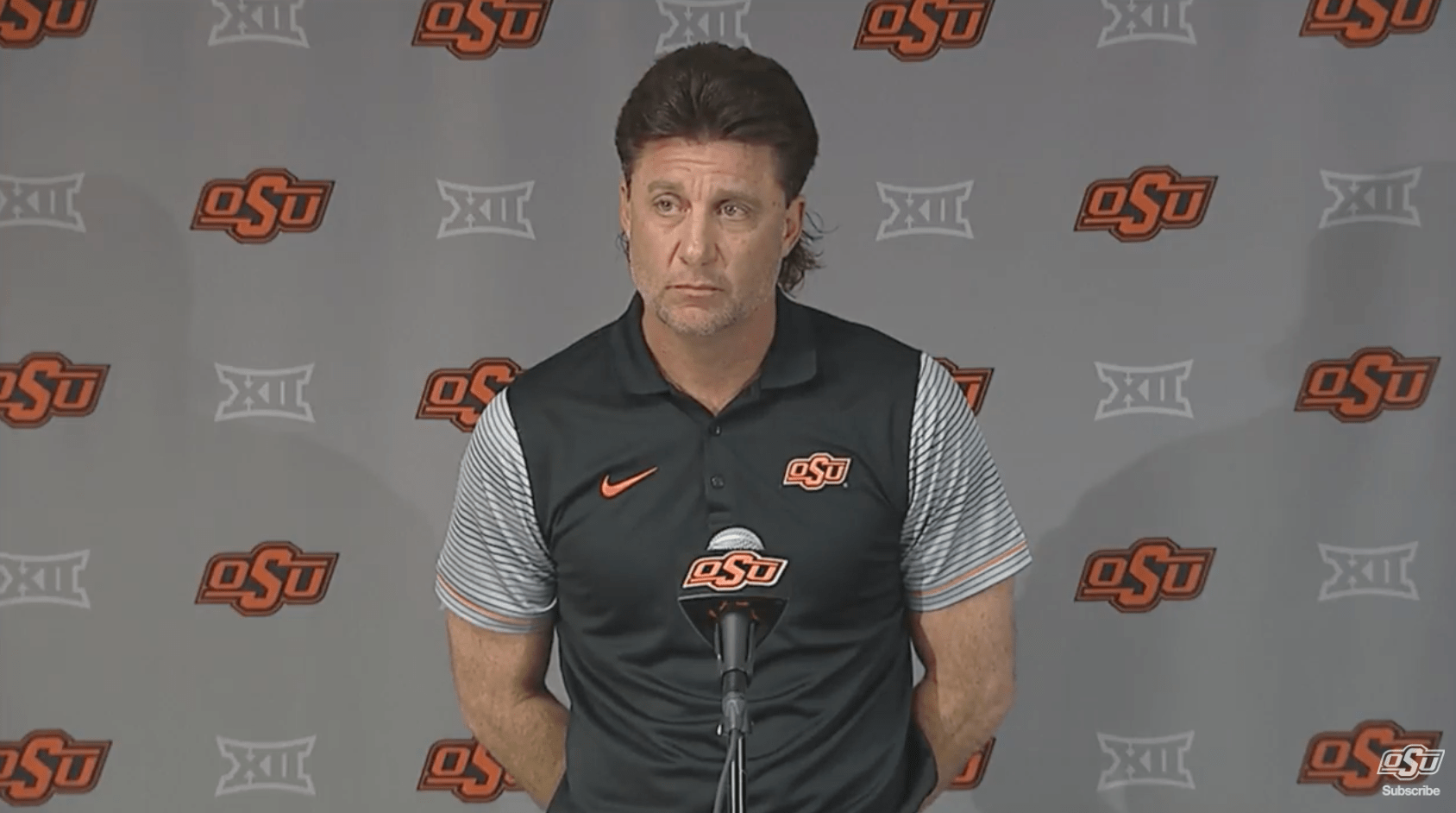 Mike Gundy talked Spencer Sanders, helicopters, why he loves the December 20 signing day and much more in his presser today. I took notes. Let’s jump in.

• Thanked staff and people in a facility. “We had a great class.” Also mentioned that the fans have a huge impact on recruiting. “Oklahoma State people are learning how to be big-time college football fans, and that makes a difference in recruiting.”

• Said families and prospects come on campus and are “mesmerized” by some of the facilities. “People see it as brand new because the upkeep is spotless and perfect.

• Success in academics “attracts the right people that will fit our culture here.”

• President Hargis always makes time to visit with recruits. “We get young men who come here, and I don’t know that they care to talk to me.” He was joking (I think), but he appreciates how much time Hargis spends visiting with folks.

• Thanked the people of the community for having open arms and being friendly. Says that helps. “Oklahoma State football continues on the rise. It gets easier for us to recruit every year.”

• Forces OSU to do their job. To go out and evaluate and get to know the kids before signing day. “Make a decision and move forward.”

• It’s a break for OSU to have this early signing day. Gets rid of a lot of the “poachers.” Said NFL spends millions but still misses players. Same thing in CFB which means OSU can spend the next month trying to find 1-2 kids to round out the class. Don’t have to drag kids along anymore. “It’s going to help clean this game up, in my opinion.”

• “The point is this: Do your job.” Mentioned “poachers” about 10 more times. Said schools go after 4- and 5-star guys then drop back to players that have committed to places like OSU. Said poachers came after OSU’s guys last night. People who want to poach late in the process “causes cheating and bad feelings.”

• It’s strenuous, but you “should invest in a helicopter. That’s what I would do.” Said don’t tell me about the problem, just find a solution. “We’re all in bowl games, what’s the difference?” Other teams have games further out than OSU’s on December 28. “We love our class. The best thing they’ve done is put early signing period in. I think this is awesome. It’s better for everybody.”

• Spencer Sanders got his LOI in first because “It’s hard to lead when you’re in the back. So … I’m all in.”

• Sanders has been raised the right way, good momma and daddy. “He’s a winner. I love that he’s labeled as a dual threat quarterback. He’s a pocket passer that can run.” Been really loyal and had a lot of opportunities to not be. Mentioned coaching staff at Denton Ryan did everything the right way and kept poachers away from Sanders.

• Sanders is most complete freshman QB “off of high school tape.”

• Sanders spent 2.5 hours fishing on Gundy’s ranch on his official visit. Said Sanders kept trying to get away from him. “We spent an hour and a half fishing on three different ponds and he never said a word to me.”

• “He’s a great prospect. He’s very humble. For all the awards he’s received, he never says a word.”

• Encouraged him to enjoy his senior year and enjoy his care. “Everything will get started eventually. It will move really fast, but he’ll be fine.”

• Offensive linemen are big and have long arms. Mentioned Tyrese as somebody who he thinks can be a great center. “It’s what you need in a class.” Let Rob Glass change their bodies and then they’ll be ready to play.

• “We feel good about (the offensive linemen). You can’t ask a whole lot of them in the first two years. Sometimes they can be a little more of an impact after the first year. You figure in two years they’ll average about 320.” Been nice to build line back up.

• CJ Moore has “more of an opportunity to get on the field than a big guy.” OSU wants to play their freshmen skill players. They need depth at WR.

• Moore got compared to Damian Davis but more “twitchy.”

• Need to play more 200-pound guys on the field at once. Play three linebackers but might go to two and five DBs all the time. Have to look at things that will help OSU slow teams down. Need more DBs that can slow the run and play man on slot receivers.

• Basketball players don’t get weight training like they will when they come to OSU. Mentioned Jason Taylor II among those guys.

• “We have the best graphics guys in the country. We have huge Power 5 schools trying to hire our guys away.” That’s way more important than Gundy writing a letter, he said.

• Helicopter is cool but it’s also efficient for Gundy. “Work I can accomplish in one day would take three days in a car.” Mentioned wanting to meet with players and their parents and coaches where they live in addition to them coming to Stillwater.

• “Flanagan was not easy to get.” Tough to pull kids out of Arkansas. “He’s a perfect fit here. He’ll be here in January.” Very fortunate to get him.

• Knew Tanner McCalister played both sides of the ball. Said he played like 160 plays in his high school’s playoff game. Said it tells you that he’s “loyal” and “likes to play football.”

• Patrick McKaufman is in the 2018 class even though he’s been on campus since summer.

• Got on board with Jonathan Shepherd early. Said they have values “like crazy.” Parents told him his word was his bond. Dad played professional baseball. Said his dad told his son “You don’t commit to Oklahoma State unless you’re going there.” Gundy thinks there were other options, but the dad wasn’t going to have any of it. He was the bounder of the operation.

• Kasey Dunn “has been great with it. He finds guys he likes.”

• Thinks Jake Ross will give them more flexibility in the fast-paced offense. “He’s 240, he’ll be 260 in six months.”

• Said the formula Dunn uses is pretty interesting. “I would argue he’s been as successful as anyone in the country.” Said he got it from the NFL but that he might have been making that up. He’s been successful at recruiting guys who most people didn’t think were good enough to play.

• Players do a great job hosting and selling the program. “When a prospect and family come in, we don’t have to put on a front.” Are who they are. “The head coach has long hair, he likes hunting rattlesnakes, he flies in helicopters and he’ll wear a wrestling singlet. That’s who we are. This is a non-BS organization.”

• Gundy doesn’t agree with all the new legislation regarding the 25-player limit in each class. If a player graduates but has eligibility and goes to get a job instead of playing, schools can’t replace him.

• Schools were trying to poach Tyler Lacy and Michael Scott.

• Barron should grow into a Sam linebacker. Peel is really athletic. Potential at the Star.

• “It’s a good class. I don’t see a reason why these guys can’t compete well enough to win a Big 12 championship.”

• OSU has one or two spots to fill. They’ll be working like crazy in January to get ready for 2019 to have a list ready for December so “you don’t sit around complaining about the early signing period.”

• “I like the development of Corn Dog, and I like where Wudtee’s at so in the spring we need to really get into how good are they and what can they do for our team. Can they lead? But … we are not scared to play a freshman. If we have a young man who comes in and has a gift. He’s willing to lead. He’s tough enough. It’s our responsibility … to put the playbook together to where the young man understands it to where he can have success.”

• “Coach Jones told us, ‘If the best players aren’t on the field, it’s your fault as a coach. You better get the best players on the field.’ That’s the old Barry Sanders story. I’ve always remembered that, and there’s no doubt about it. If we have a freshman at any position that’s the best player, clearly gives us the best chance from a leadership standpoint, from a toughness standpoint — because that’s what Mason was, he was a great leader and he was a tough sonofabitch — if this guy is that way, or any other player, you got to put them on the field. If it’s complicated … we’re not very smart.”