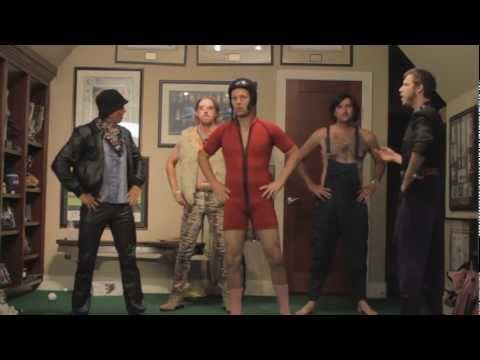 If you had the Oh Oh Oh video by the Golf Boys in a bet for “most unintentionally funny music video this month made by four professional golfers in Lady Gaga-esque outfits” then you just lost.

The video they made of how they actually made the video is far better than the video itself. Follow that? If not, see below:

First of all – how random is the framed D Wade jersey in the background? Shouldn’t there be a more obscure piece of sports memorabilia there? Maybe it’s just me but a Wade #3 doesn’t exactly scream “we are creating the funniest golf video of all time.” I would have gone with either a Ryan Leaf Colts jersey (yes, they exist) or a white caddie jumpsuit from Augusta

Why is Jacques Cousteau in charge of all the outfits?

The entire “you are a hunter” scene with Mahan destroys me. “See…the hunter pants!” “Yes, you are our guide, you will guide us…”

Seriously, I’ve seen movies with multi-million dollar budgets that had less creativity and humor than this thing.

I can’t stop laughing when Bubba walks in the room either, the face he makes when Cousteau tugs at the neck of his shirt may not ever be replicated in terms of PGA golf humor. Unless Rory uses one of Tiger’s conquests as his caddie for a major next year, then all bets are off.

Mahan looks like somebody yanked him straight off a scene of “That 70s Show” during his in-studio taping. Also, he’s absolutely been drinking. I wasn’t positive until he said “we’re just a beaming comet” but that did it for me, and it’s going to borderline take a gun to my head to convince me otherwise. Actually after seeing this video, maybe they’ve all been drinking…

Can you imagine four young stars in another sport doing this? Like say, Larry Fitzgerald, Chris Johnson, Aaron Rodgers, and Dez Bryant? Or maybe, KD, Derron Williams, James Anderson, and Brandon Jennings? I feel like they’d get killed more than these guys are. It’s almost like “oh cool, something happened in golf other than Tiger sucking, get back to us at 4 PM on Sunday for the last three holes of the Open.”

Nice take by Rickie about the video’s release – “It’s going to hit the music world with storm.” Yes, and then it will rise and win the charts!

Like I said, for my money the behind-the-scenes stuff is a lot better than the actual video that went live on the Golf Channel. I don’t know if it’s the unprovoked irony in everyone’s voice or the unflappable facial expressions from all four guys, but whatever it is I want more of it. I want an entire series of videos and I want cameos from Peter Uihlein, Mike McGraw, and Brandon Weeden. I’d also consider giving a week’s salary for Mike Holder or Boone to make an appearance.

Finally let’s close this baby out with the line of the video from Rickie, one I completely understand and concur with (as we all should):