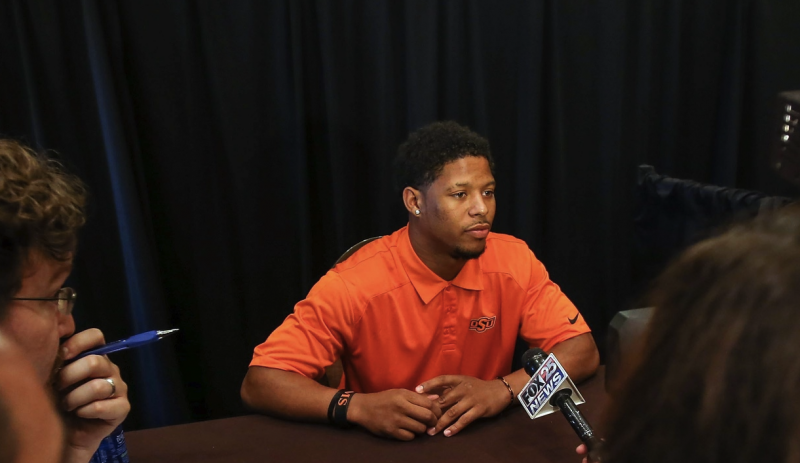 We all know Oklahoma State’s offense has been sublime the last five years. It doesn’t take a football analytical genius to figure that out — all you have to do is flip on your television on a random Saturday and within 10-15 minutes you’re likely to see the Pokes put something in the end zone or through the uprights. That’s just the way things are in Stillwater these days.[1. It makes for a way-too-maligned defense and some interesting Internet debate, but that’s another post for another time.]

You might have some questions about the offense though.

Just how good have they been at scoring though? How prolific? We know they’ve probably been the best or near the best in the Big 12 in the last few years but what about nationally? Are they efficient or does the defense just suck so much that they get a ton of possessions and capitalize on some of them?

Well lucky for you, I have answers.

This chart is sorted by points per possession over the last five years. That’s total points divided by total possessions. So essentially, offensive efficiency. You can see OSU has been third best in all of college football in that timespan and the second best BCS team. 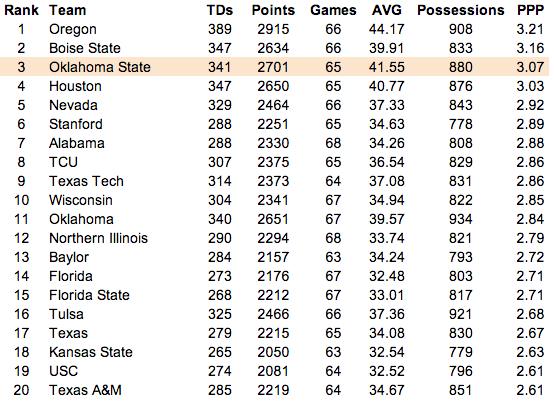 • Only four teams in the country have averaged over three points per possession over the last five years. So when (if?) people to try to tell you OSU and Oregon are just volume offenses (that is, they score a lot because they have the ball a lot), it’s just not true.[1. Or “just ain’t true!”]

• Stanford, Alabama, and TCU (given their defensive prowess) have been very, VERY good the last five years. Nearly unbeatable.

• Why does OU have so many more possessions than everyone else?

OK, so we know OSU scores a lot and does it efficiently, but are they consistent? You can hang 84 on Savannah State all day but are you scoring with any consistency throughout the season, or is everything up and down?

So I queried total games where teams score over 30 points since 2008. OSU, again, is at the top of the list. 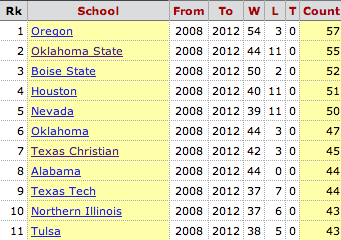