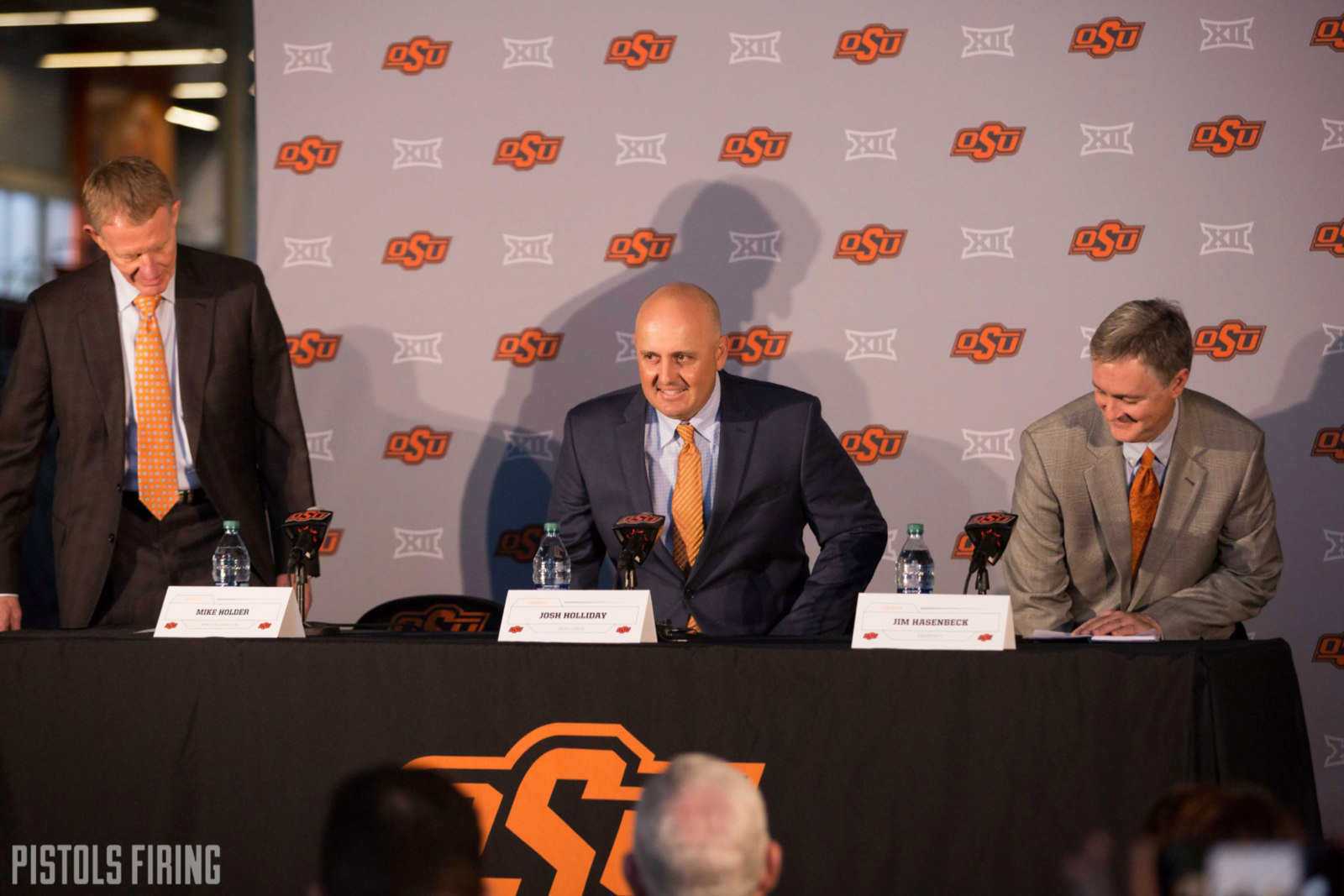 The Michael and Anne Greenwood Tennis Center was dimly lit; a few lights illuminated a podium on one of the tennis courts. The rest of the stadium was dark, but media members, Oklahoma State’s baseball team, faculty and staff gathered to discuss how vibrant the future of Cowboy baseball could be.

Coach Josh Holliday sat in the middle of the three seats at the podium, with Athletic Director Mike Holder to his right and Architect Jim Hasenbeck to his left. The press conference lasted nearly an hour, and much information was disseminated a day after OSU Baseball’s Twitter account spread news of a special announcement.

That special announcement had everything to do with a new stadium: Oklahoma State University Baseball Stadium. Here are some things we learned from this exciting day in OSU sports.

The Money is there

As you’re reading this post, steps are being made to build the stadium, which is supposed to open in spring of 2020. Land has been cleared at the corner of Washington Street and McElroy Road.

Holder took the mic first and said the cost of construction from this point forward would be about $60 million. He added it will probably cost a little more than that because of unforeseen costs they forgot about.

Board of Regents members Calvin Anthony and Joe Hall were among those Holder thanked for monetary contributions.

“I’m confident if that happens, we’ll have another donor who will step up and help us pay for it,” Holder said. “Boone Pickens, as I said, spent about $45 million of his money buying the canvas, the blank canvas for this athletic village. If you just look at the landmass that we’re gonna take up with this baseball stadium, we’re probably at about $10 million of that, and probably $5 million in design and schematics to get to this point.”

The Perks are immense

The new stadium is inspired by Boone Pickens Stadium and mimics the design and structure of many buildings on campus. It’ll include about 3,500 permanent seats, 13 suites and 400 premium seats. The total seating capacity can reach about 8,000 when needed. Below are some other amenities; OSU really went all-out with this stadium.

The Emotion was raw

Holliday said the news first hit him a few weeks ago. He was driving home when he saw big, yellow tractors and a construction fence.

“It kinda hit me,” Holliday said. “That this is all coming together, it’s all happening. Obviously when the official word came together and the date was set to share this with everyone, it was really remarkable. It’s been worth it every step of the way.”

Holliday looked a bit emotional during Holder’s opening statement. As Holder spoke, Holliday looked up a few times and appeared to be mouthing some words. Holder mentioned Holliday’s father, Tom, who “hit for the OSU Cycle” after serving as an assistant coach, head coach, fathering OSU’s current coach and becoming the color commentator for every televised home game.

I’d almost say Holliday had a tear or two welled up in his eyes, but it could have been from the floodlights directed toward the podium.

The overall energy inside the building was overwhelmingly optimistic, gratifying and surreal. There had been much talk surrounding the possibility of a new stadium, but the fact that it was finally coming to fruition was eye-opening.

I asked Holliday how much this announcement refreshed or rekindled his competitive drive, to which he said, “More than you could possibly imagine.”

The Players are valued

A mob of Cowboy baseball players stood to the side of the podium, some standing and others sitting. They watched and listened to the press conference, and I imagine the feeling among the crowd of players was mixed and somewhat bittersweet. Juniors and seniors on today’s team will never play a collegiate game inside the new stadium, barring an injury that’ll allow a medical redshirt.

However, there’s something for the players to come home to even after their career in orange and black is over. The new stadium will have an operations center, which will have  a dedicated space for former players. When they’re back in Stillwater visiting, they’ll be able to use lockers and train to further their professional career while finishing their degree at OSU.

“I want every one of these guys to pursue their pro careers and chase that dream until the very, very end,” Holliday said. “But in saying that, we want them to finish school. We want them to pursue that dream but also have a secondary vision for who they’re going to become when baseball comes to an end. To welcome guys back in the offseason to train, to give home a home, to let them finish school, to let them realize this will be their home, every single day for however long they want it to be, was a big part of our consideration.”

All of the memories

All of a sudden, Allie P. Reynolds Stadium has only one full season left. Although Holliday and his team will move to a new venue, the memories built in Allie P. won’t be left behind.

“That facility has served us so well,” Holliday said. “(It) allowed us to be the best. And we’ll take that with us. We’ll take those moments, those players and coaches who made that place light up for so many years, and we’ll celebrate them each and every day. And welcome them back to see our new home.”