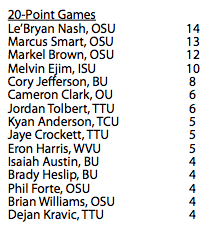 Well it wasn’t exactly viscerally pleasurable but OSU used a stifling defense and paired it with Le’Bryan Nash’s best game of the season (22 points, 10 boards) to hand Louisiana Tech its third loss of the season.

On a day when Marcus and Markel again struggled (8/21 combined) Nash took over as he is wont to do at times (the problem being that you never really know when it’s coming).

He catches a lot of flack for not living up to whatever he was projected to do but he should get an equal amount of credit for re-shaping his game this year. He doesn’t demand the ball and he (finally) has seemed to have figured out that he’s not an outside shooter and has started cutting and posting up more. That’s a great thing if you’re an Oklahoma State fan.

Per the norm for this team, though, it was its defense that controlled the game. Tech could only muster 33 percent from the floor (20 percent from three) and that’s not going to get it done against any Big 12 team, much less Oklahoma State.

I’m so impressed by the way OSU dictates games on defense and I really do hope that develops into the sole identity of this squad. The offense is great but our one-on-one defense is elite and that shouldn’t get lost amid all the offense and dunks and Lob Stilly stuff.

The oops will win you SportsCenter top 10s, but this defense is capable of winning a couple of championships.

• I like Le’Bryan growing his hair out. It’s a good look, makes him look taller, bigger, more menacing. He’s the best “looks like he’s 6’9″ and was a top 10 recruit nationally” role player in the country!

• I love that Louisiana Tech charts how many tips they get on defense. That’s awesome.

• La. Tech’s head coach (Michael White) was on the 1998 Ole Miss team that got Bryce Drewed in Oklahoma City. So, yeah, probably not great memories for him in downtown OKC.

• A few things on the Marcus Smart flopping:

1. This is a flop. If you can’t tell that it’s a flop then I cannot help you. It doesnt mean it’s not also a foul but if you believe this is how a 220 lb. rocked up dude reacts to another player bumping him with his shoulder then…I dunno, you’re lost, I guess.

2. On people constantly defending him for flopping and thus drawing fouls. Fine, I get it, helps the team by going to the line more, that’s true. I just feel like — and please don’t take this as bitter old[1. I’m 28 years old, by the way.] sportswriter talking — there’s a right way to play sports and this isn’t it.

3. It doesn’t matter what I think because the first time he walks into Bankers Life Fieldhouse in Indianapolis and does this against George Hill, Roy Hibbert will clock him into the third row and he won’t do it again.

• It’s scary that with a Smart-Brown-Forte-Williams-Cobbins lineup on the floor that it’s between Smart and Forte as the slowest player defensively at his position. That’s insane!

• Are you as surprised as I was to see who the active Big 12 leader is in 20-point games? 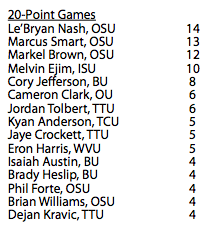 • Speaking of stats, if you like them the Big 12 weekly release is a lot of fun. Tons of career and coaches stuff, too.

• I feel like playing La. Tech in basketball in 2013 is like playing Boise St. in football in 2007. There’s just no upside except among super-wonky college hoops folks.

• Can we talk about how weird the “that was a charge but the bucket counts” call is? I mean, it might be the weirdest call in all of sports. The ref is basically saying “you did something illegal on that play but we’re going to give you the bucket anyway.”

• My yearly quota for Bryndon Manzer saying “diaper dandies” is one, and we’ve reached it.

Markel shoe update: Wore the mid-11s today. Might be my favorites: 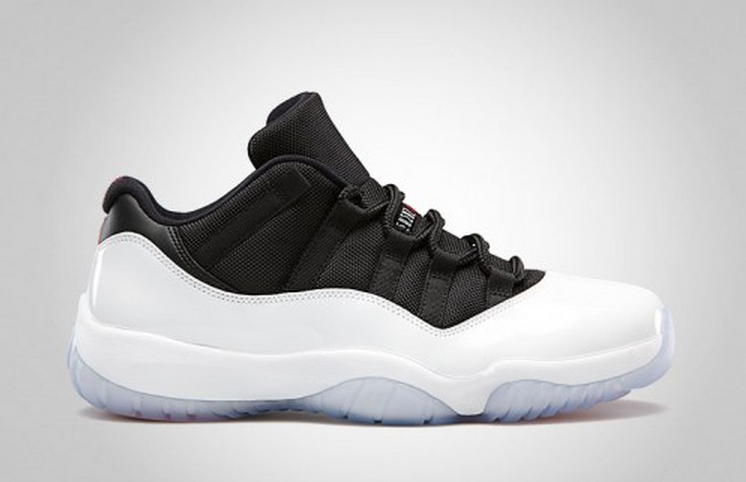 • Smart is unreal when he gets south of the free throw line. It’s almost an automatic bucket, whether from him or somebody else. That should be option Nos. 1-6 on offense.

• Why are we trying to push the “Brian Williams is the best athlete on OSU’s team” narrative? Does Williams’ family own a significant amount of Disney stock?

• The Brian Williams double-leg kick on jumpers is great. It’s not as great as Markel’s Kobe impression on deep jumpers but it’s unique, I like it.

• I feel like we’re just making up numbers at this point with Forte’s made shots per day number.

• The 429 straight games with a three streak was in serious jeopardy before Markel rattled one in with under four left. Texas leads the Big 12 with 765 straight games. That’s, like, 25 years!

Raheem Appleby only 3-for-14 against Oklahoma State today. Averaging 17 a game coming into it, had 28 earlier in the week.